What Tiny Surfing Robots Teach us About Surface Tension 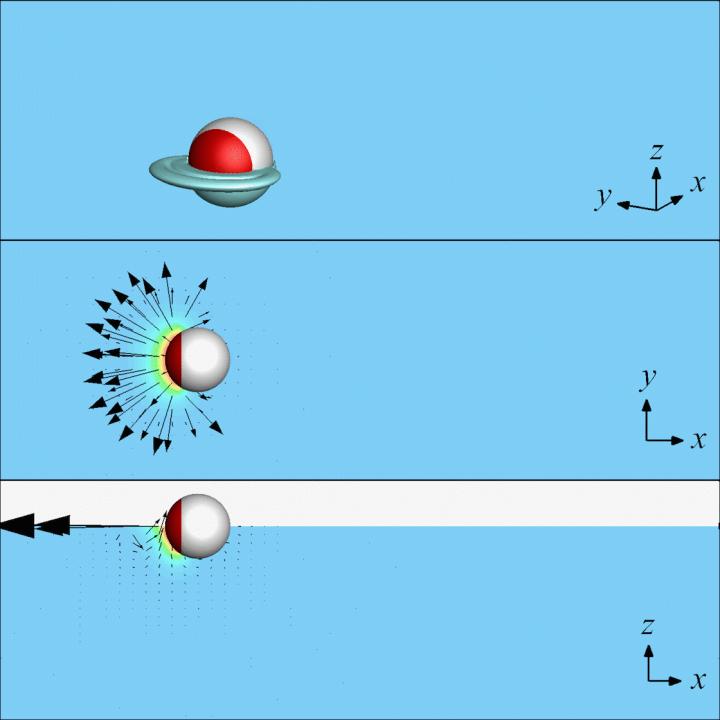 Spend an afternoon by a creek in the woods, and you're likely to notice water striders -- long-legged insects that dimple the surface of the water as they skate across. Or, dip one side of a toothpick in dish detergent before placing it in a bowl of water, and impress your grade schooler as the toothpick gently starts to move itself across the surface.

Both situations illustrate the concepts of surface tension and propulsion velocity. At Michigan Technological University, mechanical engineer Hassan Masoud and PhD student Saeed Jafari Kang have applied the lessons of the water strider and the soapy toothpick to develop an understanding of chemical manipulation of surface tension.

"During the past few decades, there have been many efforts to fabricate miniature robots, especially swimming robots," said Masoud, an assistant professor in the mechanical engineering-engineering mechanics department. "Much less work has been done on tiny robots capable of surfing at the interface of water and air, what we call liquid interfaces, where very few robots are capable of propelling themselves."

Beyond the obvious implications for future Lucasfilm droids designed for ocean planets (C-H2O?), what are the practical applications of surfing robots?

"Understanding these mechanisms could help us understand colonization of bacteria in a body," Masoud said. "The surfing robots could be used in biomedical applications for surgery. We are unraveling the potential of these systems."

Hunting for Answers and the Marangoni Effect

During his doctoral studies and postdoc appointment, Masoud conducted research to understand the hydrodynamics of synthetic microrobots and the mechanisms by which they move through fluid. While helping a colleague with an experiment, Masoud made an observation he couldn't explain. An aha! moment came shortly thereafter.

"During a conversation with a physicist, it occurred to me that what we had observed then was due to the release of a chemical species that changed the surface tension and resulted in motion of particles that we observed," Masoud said.

That knowledge has led Masoud to continue analyzing the propulsion behavior of diminutive robots -- only several microns in size -- and the Marangoni effect, which is the transfer of mass and momentum due to a gradient of surface tension at the interface between two fluids. In addition to serving as an explanation for tears of wine, the Marangoni effect helps circuit manufacturers dry silicon wafers and can be applied to grow nanotubes in ordered arrays.

For Masoud's purposes, the effect helps him design surfing robots powered by manipulating surface tension chemically. This solves a core problem for our imagined C-H2O: How would a droid propel itself across the surface of water without an engine and propeller?

Detailed in research findings published recently in the journal Physical Review Fluids, Masoud, Jafari Kang and their collaborators used experimental measurements and numerical simulations to demonstrate that the microrobot surfers propel themselves in the direction of lower surface tension -- in reverse of the expected direction.

"We discovered that negative pressure is the primary contributor to the fluid force experienced by the surfer and that this suction force is mainly responsible for the reverse Marangoni propulsion," Masoud said. "Our findings pave the way for designing miniature surfing robots. In particular, knowing that the direction of propulsion is altered by a change in the surrounding boundary can be harnessed for designing smart surfers capable of sensing their environment."

Stability Studies on the Horizon

While Masoud's work focused on understanding how microrobots can chemically manipulate their environment to create propulsion, future studies will zero in on the stability of these tiny surfers. Under what conditions are they stable? How do multiple surfers interact with each other? The interactions could provide insight into the swarm dynamics commonly seen in bacteria.

"We have just scratched the surface of learning the mechanisms through which the surfers -- and other manipulators of surface tension -- move," Masoud said. "Now we are building understanding toward how to control their movement."