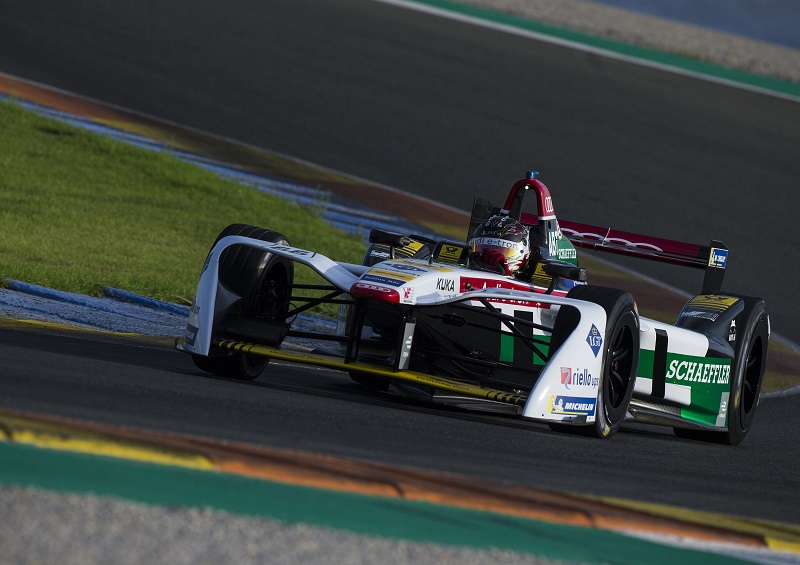 On December 2, 2017 the Audi Sport ABT Schaeffler racing team starts the fourth season of the FIA Formula E Championship in Hong Kong. As a technology partner from the outset, the Würth Elektronik eiSos Group continues to shape the success of the team. The manufacturer of electronic and electromechanical components is not only an avid supporter of the successful racing stable spearheaded by FIA Formula E world champion Lucas di Grassi, but is also supplier of the products and solutions that will race around with the electric-powered racing cars on the tight Formula E circuits in major international cities. Just how well prepared the new Audi e-tron FE04 is for the upcoming season was demonstrated at the beginning of October in the test runs in Valencia.

The countdown has started: Just a few days left before Formula E starts its fourth season on December 2, 2017 in Hong Kong. The new Audi e-tron FE04 racing machine from the Audi Sport ABT Schaeffler Team was first presented to the public in October at the E-Mobility Play Days in Spielberg, Austria, by Audi factory driver Daniel Abt. The car was then intensively tested in Valencia, Spain. “As a technology partner we are especially excited about the new season. Lucas di Grassi is looking to defend his world championship title. Daniel Abt showed strong performances in Valencia and the Audi e-tron FE04 now boasts a completely overhauled drive train” according to Alexander Gerfer, CTO Würth Elektronik eiSos Group. “Its core element is a high efficiency gearbox with only one gear.”

The four Audi e-tron FE04 cars proved to be absolutely reliable, even defying the heat of Valencia. Daniel Abt and Lucas di Grassi drove 474 laps on the test circuit – that’s a distance of 1,466 km. Daniel Abt headed the performance ratings. The key aspects of the test program in Valencia were race simulations and optimization of energy management for the newly developed motor generator unit (MGU).

“We are committed to advancing eMobility. Our technology partnership with the Audi Sport ABT Schaeffler Team provides this involvement with a special kick. Many employees keenly follow the races and keep their fingers crossed for our drivers. Lucas di Grassi and Daniel Abt have been a strong duo in Formula E from the very start, achieving 24 podium finishes in the 33 races staged so far with six victories and four pole positions. We look forward to a particularly exciting season”, says Oliver Konz, CEO Würth Elektronik eiSos Group.

Technology partnership to be further intensified

Würth Elektronik eiSos managed to put innovative solutions onto the race track in the past. REDCUBE terminals have been installed on the inverter boards since the second season. During the third season, the company optimized the backup battery for the cockpit, together with ABT. The associated battery charger was also jointly developed. Further projects are already in progress. So Würth Elektronik eiSos once again underlines its commitment to innovative components and future technologies and continues to present itself as a pioneer for electromobility.

The fourth season of the eMobility race series is also set to captivate fans with exciting circuits in the heart of selected world cities. Newcomers to the race calender include Santiago de Chile, Sao Paulo, Rome and Zurich. Especially intensive two-day races are planned to open and close the race season. “Cars and drivers are in excellent form. Judging by how the tests went, we expect a tremendous start to the season in Hong Kong”, Alexander Gerfer, CTO Würth Elektronik eiSos Group is convinced.

All races will be broadcast live on Eurosport for another three years. Race enthusiasts can enjoy the newly released 2017-18 schedule: