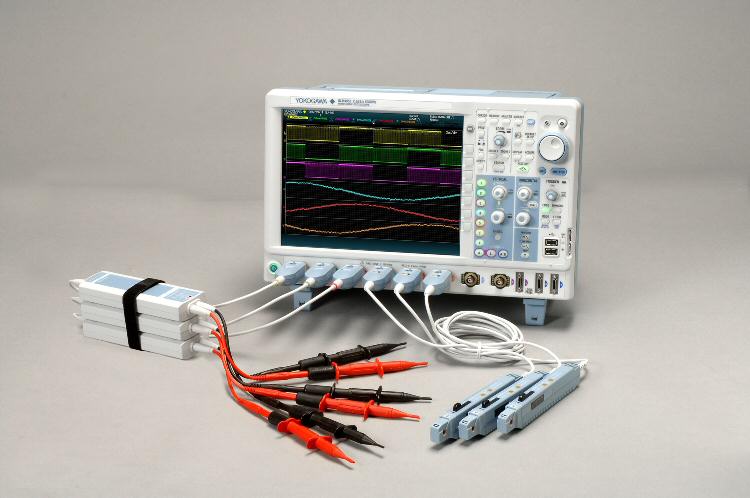 The new Yokogawa DLM4000 eight-channel mixed-signal oscilloscope combines the earlier DL7480 large screen and eight-channel capability with mixed-signal technology of the DLM2000 Series. The new instrument is well suited to test and debugging applications in embedded systems, power electronics, mechatronics, and automotive sectors. "As intelligent control permeates more and more sectors of the industry from consumer electronics to industrial drives, the signals that engineers need to look at for testing become faster and more complex", comments Terry Marrinan, Yokogawa's VP, Test & Measurement, for Europe & Africa. "As a result, the four analogue channels of the traditional oscilloscope are no longer adequate to address these challenges—hence the need for an eight-channel instrument like the DLM4000." The DLM4000 Series comprises two models, with bandwidths of 350 and 500 MHz and a sampling rate of 1.25 Gsps, expandable to 2.5 Gsps with interleaving. The channels can be allocated as eight analogue channels or seven analogue channels plus one 8-bit digital input. A future option will add 16 more channels of logic to allow seven channels of analogue plus a 24-bit digital input. The new instrument features exceptionally long memory (up to 62.5 M points per channel and 125 M points in interleave mode), allowing both long recordings and acquisition of multiple waveforms. A history memory function, which does not reduce the oscilloscope's high waveform acquisition rate, allows up to 20,000 previously captured waveforms to be saved in the acquisition memory, with any one or all of them displayed on screen for cursor measurements. Waveforms can be displayed one at a time, in order, or automatically played back, paused, fast-forwarded, or rewound. The history memory in combination with the advanced waveform search features enables users to capture and see the details of anomalies on individual waveforms when their characteristics are still unknown. Advanced measurement and analysis features include histogram and trending functions, digital filtering, zoom windows, user-defined mathematics, and serial bus analysis. The instruments incorporate a large (12.1-inch) high-resolution XGA display, and yet are housed in a compact body which is less than 18 cm deep and weighs just 6.5 kg, similar to smaller 4-channel oscilloscopes . The display is enhanced by a fine grid, high luminance and viewing angle, and on-screen markers with simultaneous display of cursors and automatic parameters. Other features include back lit buttons; additional knobs; jog shuttle; on-screen information in English, German, French, Italian, and Spanish languages; two zoom windows with 80:20 or 50:50 zoom/main area split; and a choice of first-cycle or screen average mode for frequency measurement. The DLM4000 Series comes with a variety of easy-to-configure triggers combining analogue and logic inputs such as edge, enhanced, and B-triggers. These include dedicated trigger functions for FlexRay, CAN, LIN, UART, I2C, and SPI serial bus patterns as well as the ability to perform simultaneous analyses on two different buses operating at different speeds. This capability is enhanced by the extensive search facilities, allowing the user to look for specific data in the very long memory. Yokogawa