A Quantum Magnet With a Topological Twist 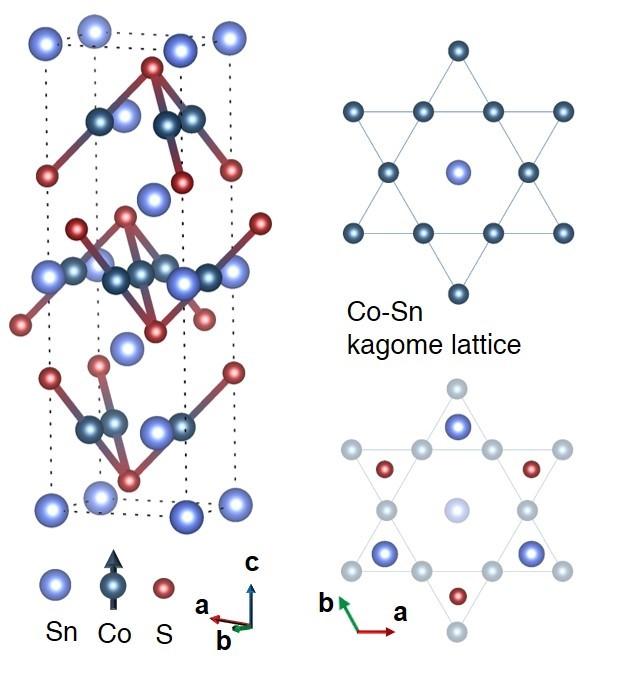 Researchers explored a material that has an internal structure, shown in 3D in left panel, that consists of triangles and hexagons arranged in a pattern similar to that of a Japanese kagome basket.

Taking their name from an intricate Japanese basket pattern, kagome magnets are thought to have electronic properties that could be valuable for future quantum devices and applications. Theories predict that some electrons in these materials have exotic, so-called topological behaviors and others behave somewhat like graphene, another material prized for its potential for new types of electronics.

Now, an international team led by researchers at Princeton University has observed that some of the electrons in these magnets behave collectively, like an almost infinitely massive electron that is strangely magnetic, rather than like individual particles. The study was published in the journal Nature Physics this week.

The team also showed that placing the kagome magnet in a high magnetic field causes the direction of magnetism to reverse. This "negative magnetism" is akin to having a compass that points south instead of north, or a refrigerator magnet that suddenly refuses to stick.

"We have been searching for super-massive 'flat-band' electrons that can still conduct electricity for a long time, and finally we have found them," said M. Zahid Hasan, the Eugene Higgins Professor of Physics at Princeton University, who led the team. "In this system, we also found that due to an internal quantum phase effect, some electrons line up opposite to the magnetic field, producing negative magnetism."

The team explored how atoms arranged in a kagome pattern in a crystal give rise to strange electronic properties that can have real-world benefits, such as superconductivity, which allows electricity to flow without loss as heat, or magnetism that can be controlled at the quantum level for use in future electronics.

In the kagome layer, the cobalt atoms form triangles around a hexagon with a tin atom in the center. This geometry forces the electrons into some uncomfortable positions - leading this type of material to be called a "frustrated magnet."

To explore the electron behavior in this structure, the researchers nicked the top layers to reveal the kagome layer beneath.

They then used the STM/S technique to detect each electron's energy profile, or band structure. The band structure describes the range of energies an electron can have within a crystal, and explains, for example, why some materials conduct electricity and others are insulators. The researchers found that some of electrons in the kagome layer have a band structure that, rather than being curved as in most materials, is flat.

A flat band structure indicates that the electrons have an effective mass that is so large as to be almost infinite. In such a state, the particles act collectively rather than as individual particles.

Theories have long predicted that the kagome pattern would create a flat band structure, but this study is the first experimental detection of a flat band electron in such a system.

One of the general predictions that follows is that a material with a flat band may exhibit negative magnetism.

Indeed, in the current study, when the researchers applied a strong magnetic field, some of the kagome magnet's electrons pointed in the opposite direction.

"Whether the field was applied up or down, the electrons' energy flipped in the same direction, that was the first thing that was strange in terms of the experiments," said Songtian Sonia Zhang, a graduate student in physics and one of three co-first-authors on the paper.

"That puzzled us for about three months," said Jia-Xin Yin, a postdoctoral research associate and another co-first author on the study. "We were searching for the reason, and with our collaborators we realized that this was the first experimental evidence that this flat band peak in the kagome lattice has a negative magnetic moment."

The researchers found that the negative magnetism arises due to the relationship between the kagome flat band, a quantum phenomenon called spin-orbit coupling, magnetism and a quantum factor called the Berry curvature field. Spin-orbit coupling refers to a situation where an electron's spin, which itself is a quantum property of electrons, becomes linked to the electron's orbital rotation. The combination of spin-orbital coupling and the magnetic nature of the material leads all the electrons to behave in lock step, like a giant single particle.

Another intriguing behavior that arises from the tightly coupled spin-orbit interactions is the emergence of topological behaviors. The subject of the 2016 Nobel Prize in Physics, topological materials can have electrons that flow without resistance on their surfaces and are an active area of research. The cobalt-tin-sulfur material is an example of a topological system.

Two-dimensional patterned lattices can have other desirable types of electron conductance. For example, graphene is a pattern of carbon atoms that has generated considerable interest for its electronic applications over the past two decades. The kagome lattice's band structure gives rise to electrons that behave similarly to those in graphene.