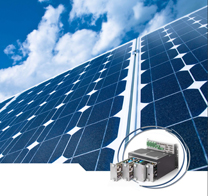 Providing fully coordinated multi-axis motion control with fast move and settle times for large mass gantry systems, ACS Motion Control, an international manufacturer of advanced multi-axis motion and machine controllers, has developed a unique real-time networking technology that controls up to 32 fully-synchronized axes of motion. Based on the EtherCAT protocol, ACS' MC4Unt system connects multiple MC4U units to integrate up to 8 axes into single network nodes, improving performance and reducing costs. The MC4Unt system was recently implemented for a large format solar panel scriber machine that required support of true multi-axis control algorithms to increase performance and throughput. The MC4Unt system, built entirely of standard components, replaced a previous generation control system that was custom-built and housed three independent eight axis controllers, all of the drives for the motion axes, and all of the power supplies for high power and logic voltages. The MC4Unt system is optimized for complex machine control and supports high density of axes with superior performance. Providing control of the 17 motion axes of the solar panel scribing machine along with several nodes of distributed I/Os from a single master controller, this control system is comprised of: