In any operating system, distribution losses are a significant factor in overall system efficiency at every level. In the case of telecom central office applications, traditional 48Vdc systems become very expensive to install (due to increased copper cost and weight) and run (due to I2R loss) while in large data centers, traditional AC distribution with the related Uninterrupted Power Supply (UPS) equipment infrastructure requires superfluous conversion stages, leading to low system efficiency using more complex equipment, with subsequently less performance (in MFLOPS) per each and every expensively air-conditioned square foot of real estate.

Within the walls of a datacenter, the 19th-century debate between Tesla and Edison over AC vs. DC power distribution at the grid level, covering technical, political, and commercial concerns, has been re-opened by the 21st century catalysts of global warming, the cost of electricity, and renewable energy sources. The blurring and/or merging of the traditional server & telecom sectors into what is now commonly referred to as ‘datacom‘, the demands of the ‘Exascale Challenge’, and consumer-driven ‘triple-play’ (voice, video, internet) services have accelerated the move to higher-efficiency systems. This has raised the argument over power distribution again, as full-scale 400VDC-based datacom installations have yielded between 8% and 10% energy savings[i].

A 400Vdc system (also referred to at 380Vdc) offers several advantages to the data center. The largest advantage is the streamlining and simplification of the power system, reducing the components, the related parasitics & leakages involved in them, and the connection & mounting infrastructure. In addition, fewer conversion steps also mean a higher level of system reliability as well as a lower materials cost (in very expensive and heavy devices). No synchronization is needed to use (often incentivized) wind, solar and/or other grid-interactive power at the right time (with less dependency). Plus, no phase balancing / harmonic problems exist and there is no stranded power due to equipment de-rating. 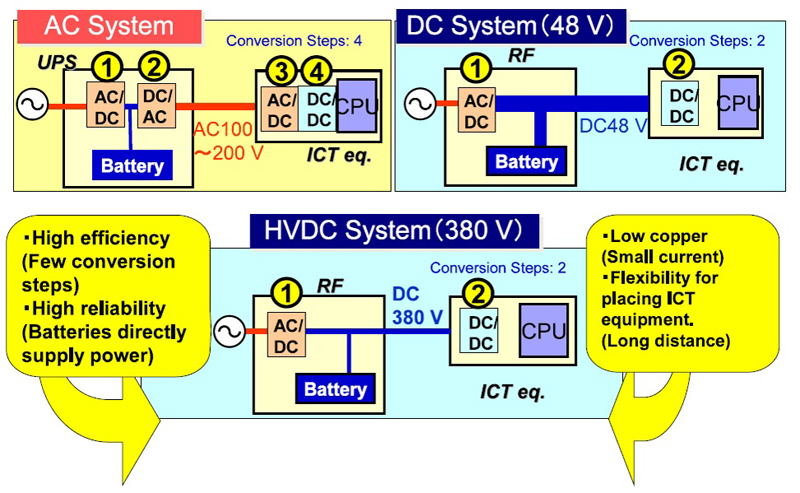 Considering that only a ridiculously small amount of the power in a data center actually gets to the systems actually involved with performing the work, any added efficiencies in the infrastructure systems pays off exponentially in ROI and system reliability. At the package and board level, the advantages continue, with less copper required for lines able to run longer distances and the elimination of duplicated power stages. Increased efficiency also means less waste heat, with the related advantages of lessened thermal impact on components and reduced cooling requirements at every level.

While 400Vdc-based power distribution trials indicated promising commercial value over the last decade, including Intel’s LBNL trial in 2007 plus dedicated pioneering work from NTT, there were many hurdles to adoption, including a lack of standards, metrics, distribution hardware (connectors, power strips, etc.) and power converters. These barriers hindered engineers from testing and deploying 400Vdc-based systems in the past.

The tipping point has occurred within the last two years, starting with ITU and ETSI published standards and working groups including IEEE, NFPA, Emerge Alliance, etc.[iv] and concurrent installation work at NTT, Hitachi, Orange and China Telecom. Note that while in general discussion, “400Vdc” and “380Vdc” have been used interchangeably, when referring to the voltages in detail, 380V is the nominal (normal operation) reference voltage and 400V is a maximum operating voltage condition.

To address this new market opportunity, Vicor has created the ChiP (Converter housed in Package) family of board-level 400Vdc-input power converters, based on proven conversion technology introduced in 2003. ChiP converters are suitable on their own for 12-to-48Vdc legacy loads as well as serving in a power solution for next-generation systems drawing as low as one volt.

ChiP technology[vi] is a major step in power conversion efficiency (%) and density (W/in3) with a manufacturing flow akin to semiconductor ‘chip-scale’ packaging techniques. With CHiP, all of the manufacturing PCB panel is utilized and the individual components are sawn into ‘ChiP-scale’ power devices. Combined with advanced design techniques and latest generation active silicon components, ChiP converters enable unprecedented performance without resorting to nascent, unproven semiconductor materials.

The first ChiP example uses the Sine Amplitude Converter (SAC) ZVS, ZCS DC-DC bus converter to convert from nominal 384VDC direct to 12V or 48V using a fixed ratio, isolated, fixed-frequency, LC-resonant transformer.[vii] [viii]  The 6123 (61 x 23mmm as sawn) package is capable of 1,500W at up to 98% efficiency, with a resulting power density of over 2,000W/in3.

To continue the power conversion story, we must first consider the input and output voltage requirements. In systems with a tightly regulated 380V input, a fixed-ratio converter creating a simple 12V (or 48V) rail gives the highest efficiency, smallest size result. However, if the input voltage varies (e.g. if the AC line fails and energy storage at 400V starts to decay (down to as low as 260VDC in the ETSI case), a regulating stage is required to maintain the output voltage and enable a controlled shut-down of the system to maintain task- or data-integrity. In this case, a housekeeping system monitors the ~380V rail and inserts a regulating stage, as shown in Figure 2. 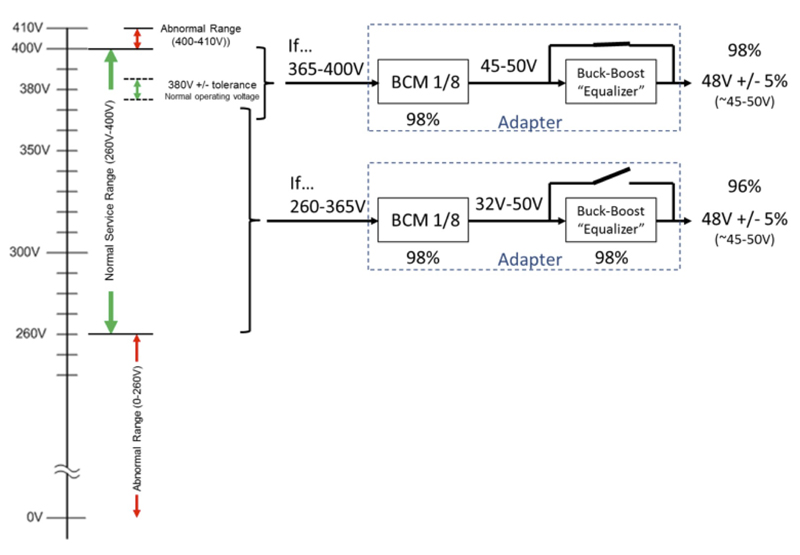 Here, the regulating ‘equalizer’ is 3623 ChiP non-isolated, ZVS buck-boost converter, with up to 98% efficiency and >2,500W/in3 power density. With this small, yet efficient combination of converting devices, the question of power conversion location is opened up. Now, the 400V-12V/48V converter can be placed in a ‘drop-box’ on the bus bar, within a power strip, or even on the motherboard of the server/switch/router load. This completely eliminates traditional silver-box power supplies and frees valuable rack real estate for additional switching/routing/processing hardware, increasing the MFLOPS/sqft metric.

In any power distribution infrastructure, maintaining a stable output under varying input conditions is paramount. The proper circuit cannot add too much cost and complexity to the solution or it becomes unfeasible. In this case, a microcontroller-supervised housekeeping circuit in the power chain monitors the input voltage and kicks in a regulator in circumstances where the voltage drops below 380V. With Vicor’s Equalizer in the powered equipment power supply chain, there is no efficiency penalty in supporting the ETSI EN 300 132-3-1 normal service voltage range of 260V - 400V DC.

The “Equalizer” block enables the use of a high-voltage bus converter as equipment front-end element, with minimal impact on conversion efficiency. During normal operation with a source voltage greater than 350Vdc, the equalizer is bypassed and does not impose any losses in the power transfer. The equalizer is activated only when the source voltage drops below the 350V DC level (typically during battery discharge). Efficiencies in such systems are usually as high as 98% under normal operation, and in the circumstances where the housekeeping circuitry is employed, efficiencies can remain as high as 96% (see Figure 3).

With the agreement on 400Vdc standards and the availability of power distribution and conversion hardware, major savings can be enabled across the industry. In 2010, data centers alone used about 1.3% of the world’s total electrical energy (or 250B kWhr/yr)[ix]. The efficiency advantages of 400Vdc systems have the potential to save $9B/yr (€5B) across the industry. Savings from industrial, commercial, retail real installations would add to that financial figure. Concurrently, 16M tons of CO2 could be eliminated and 15M barrels of oil saved per year[x].

The current state of 400Vdc-based is no longer a curiosity or intellectual exercise, but a reality that must be addressed by the design community. Solutions such as the ChiP bus converters and buck-boost regulators can significantly simplify the creation of power systems serving the next-generation industrial and datacom marketplace.