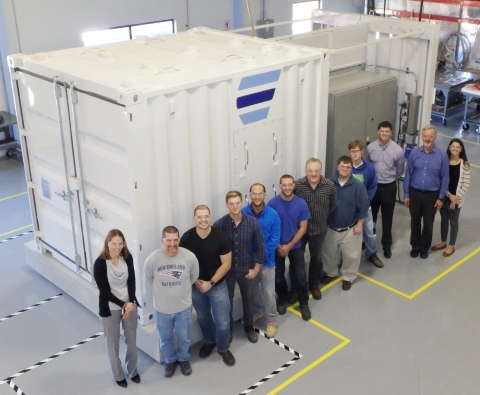 Ambri, a developer of novel Liquid Metal Battery grid-scale energy storage technology, announced that it has completed the first testing period of its fully-functioning in-lab “Beta Core” energy storage system, which provides 20 kWh of energy storage with a peak capacity of 6 kW and contains 432 cells. The company assembled its Beta Core after completing a major redesign and robust testing of its high temperature seal for the Liquid Metal Battery cell, which had been a cause for commercialization delays in the fall of 2015.

Successful completion of the Beta Core project at Ambri is a major milestone, and includes designing, building and testing a containerized energy storage system with all of the components required for future commercial systems. With this accomplishment achieved, Ambri will now focus on its initial commercial system, which will be available for testing in 2017, and which will have over 500 kilowatt-hours per ten foot container. Ambri systems can be strung together to scale to hundreds of megawatt-hours of energy storage capacity.

3. Designing a thermally-insulated container to keep the Liquid Metal Battery cells at temperature when operated, enabling the system to be ‘self-heated’ (e.g., zero heater power required) when cycled regularly.

“The year 2016 has been a remarkable period for Ambri – we validated our high temperature seal, built hundreds of Liquid Metal Battery cells consistently with over 98 percent yield rates, and validated our system design to give us confidence to move to our next phase of development. I couldn’t be more proud of our team,” said David Bradwell, Ambri’s Chief Technology Officer. “The Liquid Metal Battery technology continues to show remarkable promise, including no fade rate of our battery on full depth of discharge cycling over thousands of cycles and years of operation.”

“The market for energy storage continues to evolve and grow, and we are enthusiastic about delivering our distinguished low-cost, long lifespan, safe and reliable storage solution,” said Phil Giudice, Ambri’s CEO.