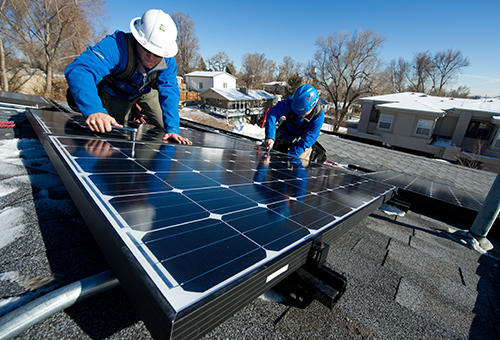 A new NRDC report finds that the transition from fossil fuels to clean energy is irrevocably underway. But don’t take our word for it—ask the nation’s electric utilities who have already made long-term business plans based on that reality.

Several major utilities interviewed by S&P Global Market Intelligence indicated that their fossil fuel retirement and clean energy investment plans have not changed because of the election results. This is an encouraging sign because utilities must play a critical role in meeting our environmental and economic goals, and remain the most important—although not the only—investors at about $2 trillion expected in the next few years, long-term system planners, and resource integrators of our electric and natural gas systems.

It also makes business sense for the utilities to stick to their long-term plans since building and replacing electricity generation and related infrastructure are long-term investments. Political cycles are much shorter, and it would be unwise for utilities to make long-term investment decisions based on election results—especially when there are clear economic, environmental, and customer demand trends pushing a transition to solar, wind, and energy efficiency to meet customers’ energy needs.

It also makes policy sense. Utilities are primarily regulated at the state level by state legislatures and regulators, so the federal election doesn’t have an impact on utility regulation. States like California, New York, and Minnesota will continue to require and encourage utilities to be clean energy leaders and to develop new business models for utilities that reward them for innovation and clean energy progress. Meanwhile, Exelon was just instrumental in passing Illinois’ most significant piece of climate and clean energy policy in the state’s history.

The federal administration may be changing, but many other important variables are not. This is not to say federal policies don’t matter. While the clean energy future is well underway, bad federal policies can delay progress, increase the cost of meeting pollution goals, make the U.S. economy less competitive, and put millions of jobs at risk.

Energy efficiency, demand response, and renewables are not only lower cost than most fossil and all nuclear alternatives, they are zero-emission and waste-free. An annual analysis by the investment firm Lazard determined that wind energy is now the lowest-cost energy source, even before factoring in federal green-energy tax incentives. Solar photovoltaic costs have fallen by 82 percent and are also competitive with new fossil investments. And energy efficiency has always been the most cost-effective option to meet our energy needs. As a result of these technology trends and low natural gas costs, the share of electricity generated from coal fell from 52 percent in 2000 to just 33 percent in 2015.

That is something that the elections alone cannot change and why utilities are sticking to their plans to shut down aging, dirty coal plants and move to cheaper, renewable resources.

States, especially red states, are among the renewable energy leaders

The clean energy transition is well underway in red and blue states alike because of its proven benefits in strengthening the economy, creating jobs, lowering customer’s bills, and improving public health. State lawmakers and utility regulators largely determine the energy mix in each state, even as Congress and the Department of Energy play an important role in making national energy policy. Twenty-nine states and the District of Columbia have established state level requirements that utilities obtain a specific amount of energy generated from renewable resources, and nearly every state invests in energy efficiency (although not at all close to optimal levels). One out of five Americans already lives in a state with a 50 percent renewable energy target.

Fortune recently reported that, despite their lawmakers in D.C., red states “leading the way in new wind projects are GOP strongholds Texas, Oklahoma and Kansas, home to some of the leading critics of climate science and renewable energy incentives in Congress.” That’s progress that states and utilities can continue no matter what direction the federal government takes.

Frank Prager, Xcel Energy’s vice president of policy and federal affairs said “Regardless of the outcome of the election, Xcel Energy will continue pursuing energy and environmental strategies that that appeal to policy makers across the political spectrum because we are focused on renewable and other infrastructure projects that will reduce carbon dioxide emissions without increasing prices or sacrificing reliability.”

Other economies around the world are still committed to action

China, India, the European Union, and nearly 200 other countries are still committed to moving forward on the Paris agreement, which entered into force on November 4, 2016, and aims to limit global temperature rise to 2 degrees Celsius while making best efforts to keep it to 1.5 degrees Celsius. Their commitments were reaffirmed in Marrakech in November, despite U.S. election results.

In Marrakech, China made it clear that it is positioning itself to be the global leader on clean technologies and climate change. China invested more than $111 billion in clean energy last year and is implementing a myriad of policies to reduce global warming and other pollution. The Chinese obviously have a long way to go, but they are placing their bets on a clean energy future that America could miss out on if we aren’t careful.

Like the utilities, the rest of the world knows that the threat posed by climate change is not going away because of an election.

While the economic, environmental, and customer demand drivers will keep pushing the clean energy transition, federal policies will be needed, in addition to state and local, to ensure that America benefits from the clean energy technology and employment surge that will accompany it. Appointing anti-renewable power activists to lead the Department of Energy’s transition would be a good way to ensure other countries get that prize instead—and they are not waiting. Neither should we.