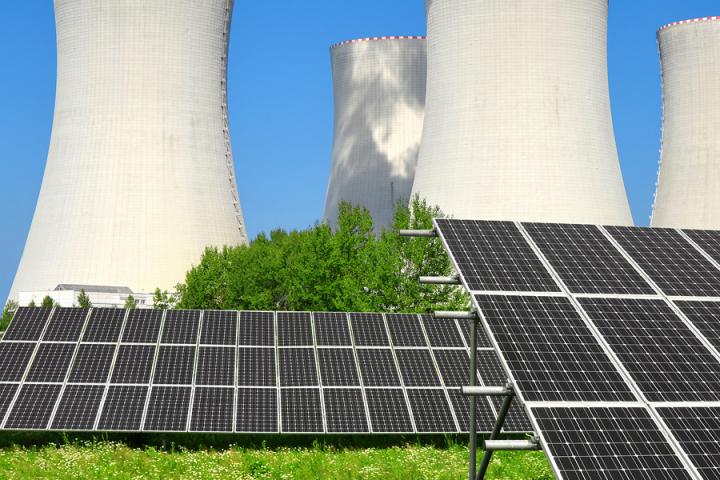 Power plants that balance nuclear and renewable energy could increase revenues from electricity markets and reduce variable operating and maintenance costs, according to Argonne scientists.

Nuclear power plants typically run either at full capacity or not at all. Yet the plants have the technical ability to adjust to the changing demand for power and thus better accommodate sources of renewable energy such as wind or solar power.

Researchers from the U.S. Department of Energy's (DOE) Argonne National Laboratory and the Massachusetts Institute of Technology recently explored the benefits of doing just that. If nuclear plants generated power in a more flexible manner, the researchers say, the plants could lower electricity costs for consumers, enable the use of more renewable energy, improve the economics of nuclear energy and help reduce greenhouse gas emissions.

Audun Botterud, a principal energy systems engineer in Argonne's Energy Systems division, is encouraged by how, for the first time, "this research evaluates and demonstrates the potential value of flexible nuclear operations in a realistic power system in the United States challenged by high variability in renewable-energy generation."

The study helps to dispel long-held views that nuclear power plants must operate in "baseload" mode, producing power at maximum rated capacity whenever they are online. Nuclear plants can even respond dynamically to hourly electricity market prices and second-to-second frequency regulation needs, the team found. Power systems that include renewable energy must be more flexible to balance supply and demand at all times. Nuclear operators in France, Germany and other countries are familiar with this approach, but less so in the United States.

The researchers developed a mathematical representation of the physics-induced operational constraints arising from nuclear reactor dynamics and the fuel irradiation cycle in the Applied Energy article and a companion paper, published in Nuclear Technology. The interdisciplinary team then combined the new approach with power system simulation models to evaluate the overall cost of electricity generation, market prices and resulting revenues for power plants, assuming different levels of nuclear flexibility.

"Nuclear power plants are governed by a different set of principles compared to other generators, and our approach enables the representation of these relationships in the analysis of power systems and electricity markets," said Francesco Ganda, the principal investigator of the project and a principal nuclear engineer in Argonne's Nuclear Science and Engineering division.

By being flexible, plant operators can lower overall operating costs in the power system. For example, operators could generate less nuclear power whenever renewable energy is widely available. Nuclear plants could then exploit their spare capacity to sell valuable "operating reserves," or the ability to quickly change power output to help grid operators rebalance supply and demand when unexpected events occur, such as power plant failures or errors in demand forecasts.

Jesse Jenkins, graduate researcher at the MIT Energy Initiative, notes how the researchers' modeling approach and study "gives us tools to further explore potential benefits of flexible nuclear operations to work in tandem with greater shares of variable sources of renewable power generation on the pathway towards low-carbon electricity supply."

Other Argonne study authors include Richard Vilim, Zhi Zhou and Roberto Ponciroli. The research was funded, in part, by Argonne's Laboratory Directed Research and Development program.