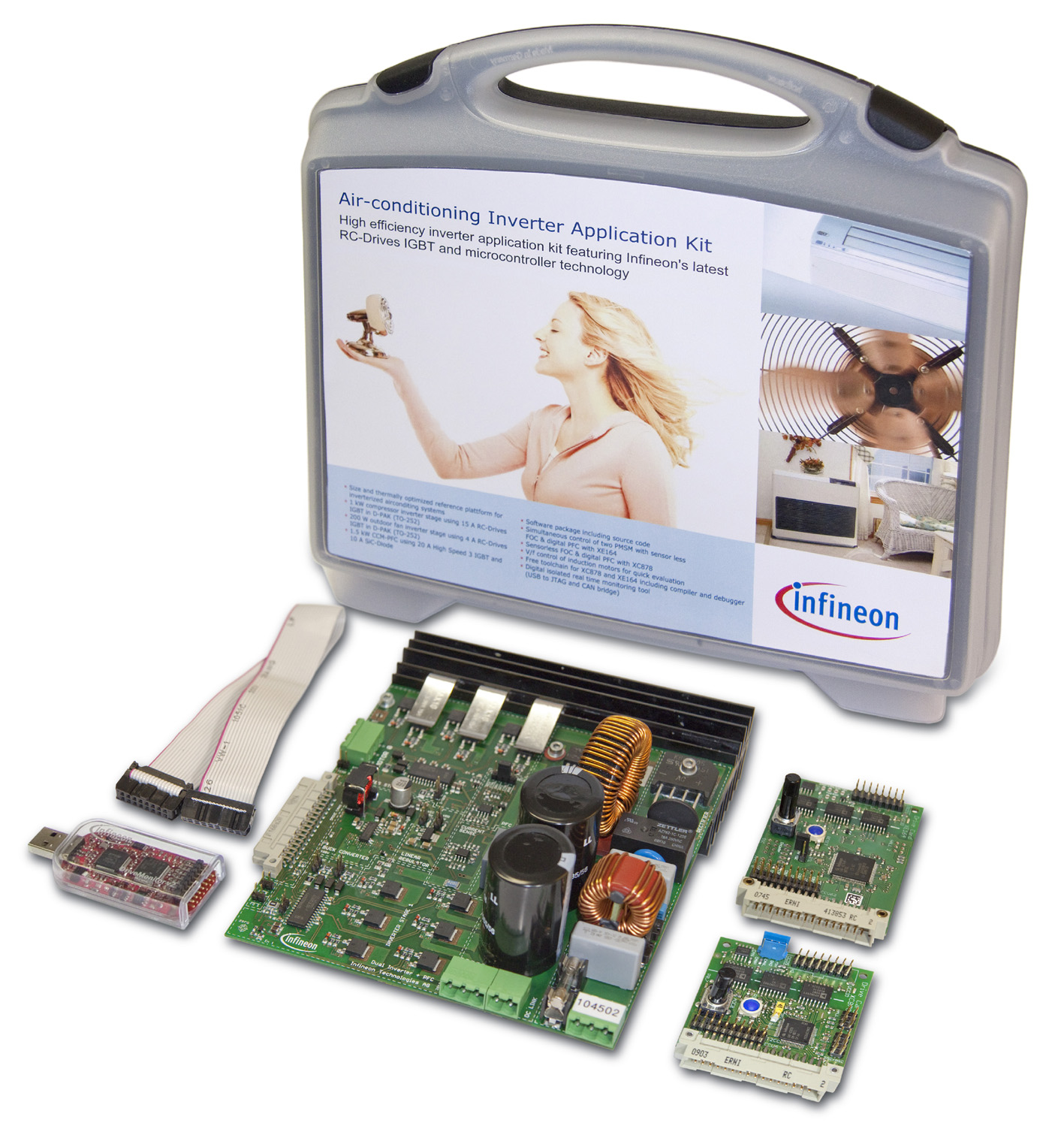 The demand for energy in our world is increasing dramatically. A large portion of this demand comes from air-conditioning systems that are running over all the different climate zones. Energy saving can be optimized using variable frequency drives with the best cost and performance-optimized power electronics. Increasing demand of power electronics for inverterized drives The demand for these systems is increasing resulting in a usage of high efficient systems that can only be realized with the utilization of modern power semiconductor devices. The increasing demand on power electronics is driven by strong factors that are not only based on end-customer requirements in electricity saving, but also programs of governments emphasize the usage of advanced solutions for the compressor and the fans in air-conditioning-systems. Power electronics usage is a common trend in washing machines, fridges, freezers and dryers basically effecting a wide range of the so called white-goods applications that are benefiting from the usage of frequency variable drives. Trends are set by the white good producers that implement drives and inverters that can bring their systems energy consumption down to fulfill the requirements set by energy efficiency classes that go beyond the commonly known classes like A++. Differentiation in the market is done with new strategies that quote top-runner models of the year or systems that are 40% more efficient than the A group are labeled with "A-40 per cent". Infineon offers a wide portfolio of energy saving chips for the whole system chain of power electronic devices for air-conditioning systems. To enable engineers a fast entry in the usage of our devices we developed a reference design that controls the compressor and the fan with minimized bill of material to achieve an efficient and powerful control for air-conditioning system shown in Fig. 1a & b. The reference design is split into an inverter section and a control section realized on two separate printed circuit boards. This enables the user to interchange different controllers and adopt existing control solutions. 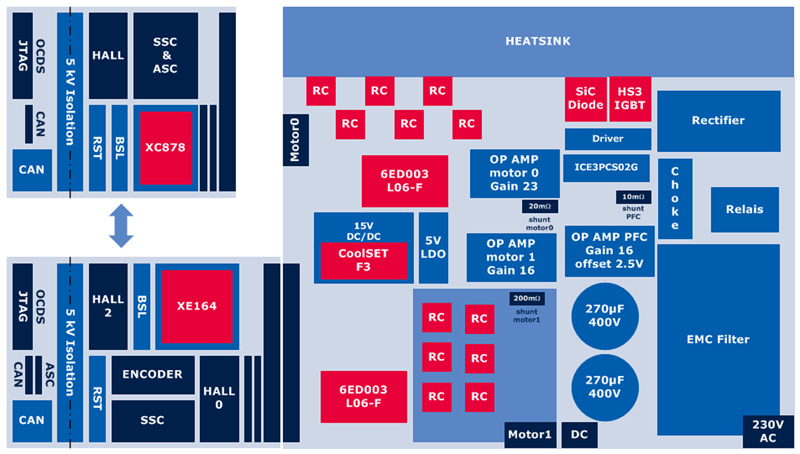 The reference design uses the industry standard field orientated control with a single-shut solution to lower the energy consumption and increase the comfort functions. In air-conditioning systems the usage of induction machines is quite common, but they are usually running with a constant speed. Inefficient mechanical switching stages are used since they are simple and easy to implement. The usage of permanent magnet synchronous machines is not only resulting in a size reduction of the system they are also resulting in a silent operation and an increase of efficiency. Innovative semiconductors for air-conditioning systems A recent trend is the application specific usage of power electronic devices in the form of discrete products. In the last years more and more modules where established in the motor-inverters, due to the simplified design in procedure and the production simplification. Due to a multiple sourcing strategy and a flexibility in selection of the different semiconductor sections the trend now goes in the opposite direction enabling cost saving potentials with discrete devices. Microcontrollers, drivers and power semiconductors can be arranged in the wanted configuration. But not only the selection of the best fitting devices is an issue also the thermal design and the production facilities have to be taken into account. To help our customers with this process the "Air-Conditioning Inverter Kit" was released to guides engineers to realize a price optimized system. On a single PCB a compressor up to 1.2kW and a fan (200W) can be controlled. The board can run on the 110V and the 230V grid and offers with the microcontroller board the two motor-inverter and the PFC.ds with an 8-Bit controller (XC-878) that is capable of controlling PFC and a single motor and the 16-Bit controller (XE-164) for controlling two motors and the PFC. In air-conditioning inverters a B6-full bridge configuration is used where the IGBT is the most preferred power semiconductors since it has all the preferences on a high power density and a good commutation behavior of the anti-parallel diode. The most recent IGBT TRENCHSTOP™ technology now replaces conventional non-punch trough und punch-trough IGBTs in all frequency classes and offers an extremely performant usage in terms of overall power losses, EMC behavior and cost effectiveness. 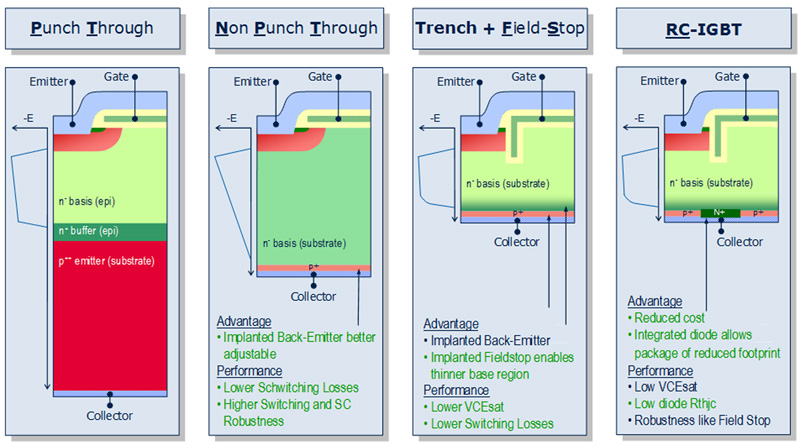 Usually the IGBTs used in inverter systems are using a freewheeling diode that is integrated in a duo-pack solution using two dies in a single package. Infineon's new RC-drives technology has this diode chip monolithically integrated in the IGBT structure itself (Fig. 2). The monolithically integration enables a shrink of the common duo-chip solution up to 40%. This enables the usage if smaller packages for the same current class. A typical TO-220 or TO-263 (D²-PAK) can be replaced with the next smaller ones TO-251 (I-PAK) or TO-252 (D-PAK). Leading to a smaller footprint on the PCB and resulting in cost- and space-saving. The reference design uses 15A devices for the compressor and 4 A for the fan both SMD mounted devices. Usually frequencies between 5kHz and 16kHz are used for these inverter stages since it's always a sacrifice of performance to go for higher switching frequencies for the compressor 5 kHz are used and for the fan 16kHz if these inverters are used in an living environment the switching frequency for the compressor can be increased according to the audible noise limit with power limitations. The RC-drives technology offers very low conduction losses (Vcesat) and still low switching losses (Ets) with a very soft turn-on turn-off behavior to low the EMC. The latest Highspeed 3 generation brings the IGBT technology to the high speed switching world in power factor correction systems. The economic attractive replacement of planar MOSFETs with IGBTs enables further cost saving potentials and makes the decision easier to use an active PFC in the system. In combination with the latest SiC-Diodes in the ThinQ!-technology efficiencies of above 97% can be achieved with conventional 67 kHz boost PFC systems. If the usage of lower switching frequencies is preferred e.g. 40kHz standard Si-based diodes can be the right choice these power diodes based on Infineon's emitter-controlled again lower the cost for the power devices but also increase the size of the passive components. The PFC function on the board is realized in two ways a PFC IC (ICE3PCS02G) is on the board that can quickly provide the functionality if further functions are needed the PFC function can be provided by the microcontroller. Optimized control algorithms For established open-loop control of the synchronous machines trapezoidal or block commutation with the usage of hall-elements or back EMF sensing causes noise especially at low speed and additionally limits the maximal speed. The field oriented control (FOC) leads to overall system efficiency due to sinusoidal currents with a low torque ripple and a wide speed range (Fig. 3). For a quick start a full tool-chain is included in the evaluation kit. The field-oriented control is implemented for both inverters using a single-shunt based feedback loop.

Thermal Concepts for air-conditioning systems The removal of the dissipation loss of power semiconductors is a key issue in the system design. If through-hole-technology (THT) is used, the removal of the dissipation loss can be realized relatively easy. For the THT profile heat-sinks are used, which are isolated by heat conducting film from the IGBT and which are clipped to the components. The heat transfer for this technology is very efficient, whereat the technical production costs are immense. An alternative to the THT components is the use of surface-mounted devices (SMD), they are generally easy to integrate into the production process and do not require manual intervention. The power semiconductors can be contacted to the heat-sink through various methods. Neat solutions for contacting is the use of IMS-materials (Insulated Metal Substrates), for which aluminum is used as a thermal interface material, which offers significantly better thermal conductivity than the standard FR4 material. In the area of white goods, these materials are not very common due to higher costs. For a good heat dissipation of SMD packages Infineon recommends the usage of two-layer FR4 PCBs with thermal vias. A good thermal coupling of the IGBT lead frame to the heat-sink is achieved when using 200μm thick vias. These will be nearly closed during the manufacturing process of the circuit board through the copper electrolysis and offer a good alternative to pure copper inlays. The vias can be distributed across the IGBT leadframe surface because solder is no longer pulled away from the SMD package. Conditions of manufacture of larger vias are also possible; Infineon recommends an array of vias outside of the lead frame. The isolated compound of the PCB to the heat sink is possible over a wide range of self adhesive heat conducting foils. Conclusions and outlook Newest power semiconductor technologies enable high efficiencies for air-conditioning inverters at reduced system costs. The usage of small SMD D-PAKs in inverter topologies above 1kW opens new horizons for power density increase. New IGBTs are currently under development that will allow the usage of these devices for all power ranges at frequencies above 16kHz to increase the comfort function of the inverters. In combination with powerful microcontrollers and driver ICs the bill-of-material can be reduced significantly and make the system reliable and cost efficient. www.infineon.com/aircon