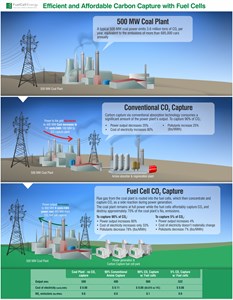 FuelCell Energy, a leader in the design, manufacture, operation
and service of ultra-clean, efficient and reliable fuel cell power
plants, announced the continued progress in the commercialization
of an affordable and efficient carbon capture solution utilizing fuel
cells, following thousands of hours of testing with simulated flue gas
of a coal-fired power plant.

In addition to this evaluation under a
U.S. Department of Energy (DOE) contract, the program included a
detailed design and cost analysis for fuel cell applications capturing
carbon dioxide (CO2) from large scale coal-fired power plants. Results
of this study support cost targets below the U.S. Department of Energy
threshold of $40/ton. An additional benefit demonstrated is tolerance
levels and clean up requirements for the impurities in coal plant
exhaust, as well as the ability to destroy approximately 70 percent of
smog-producing nitrogen oxide (NOx).

In addition to this progress for coal-fired applications, testing is
being conducted with private funding for the evaluation of fuel cells
for capturing CO2 from natural gas fired power plants. Results to date
are supporting the viability and cost targets for gas-fired power
plants and exhaust sources.

Discussions are currently underway with multiple parties to scale the
technology from the current sub-megawatt level to a multi-megawatt fuel
cell demonstration project at an operating coal or gas-fired power
plant.

-- Conventional carbon capture technologies for coal-fired power plants
nearly double the cost of power, without any significant destruction of
pollutants and consumes about 20 percent of overall power output.
-- Utilizing a fuel cell solution to capture 90 percent of carbon emissions
results in a 78 percent reduction in NOx emissions, increases power
output by 80 percent, and only increases costs by less than half of
conventional amine capture, which is within DOE cost targets of capturing
carbon for less than $40/ton.
-- Fuel cell plants can be added incrementally in a cost effective manner.
For example, beginning with five percent capture of carbon emissions
doesn't materially change the cost of power for rate payers while
decreasing pollutants and increasing power output.

It is also appropriate to highlight the value of the Federal
Investment Tax Credit in relation to carbon capture as the presence of
the ITC reduces the total capital investment needed by the power plant
owner to meet carbon reduction targets and facilitates the attraction
of private capital to own the fuel cell power plants, leading to lower
costs for rate-payers," continued Mr. Bottone.

The FuelCell Energy technology efficiently separates and concentrates
CO2 as a side reaction during the power generation process. In a
typical application, clean natural gas is combined with ambient air to
the fuel cells for their power generation process. For the carbon
capture fuel cell solution, the exhaust flue gas of a coal or gas-fired
power plant is directed to the air intake of the fuel cell plant,
replacing the use of ambient air. Within the fuel cells, the CO2 in the
flue gas is separated and concentrated enabling cost effective capture.

An additional benefit is that approximately 70 percent of the
smog-producing nitrogen oxide (NOx) emissions in coal and gas-fired
power plant exhaust is destroyed by the electro-chemical reaction
within the fuel cells. This reduces the cost of NOx removal equipment
for power plant operators while benefiting society with cleaner air.
Since DFC power plants produce power efficiently and with virtually
zero emissions, the net result is a compelling solution for preventing
the release of green-house gases by coal or gas-fired power plants
while simultaneously increasing overall net efficiency and power
output. Additional benefits include reduction of the operating cost
related to removal of NOx and reduction in water usage as existing
carbon capture technologies are water intensive.