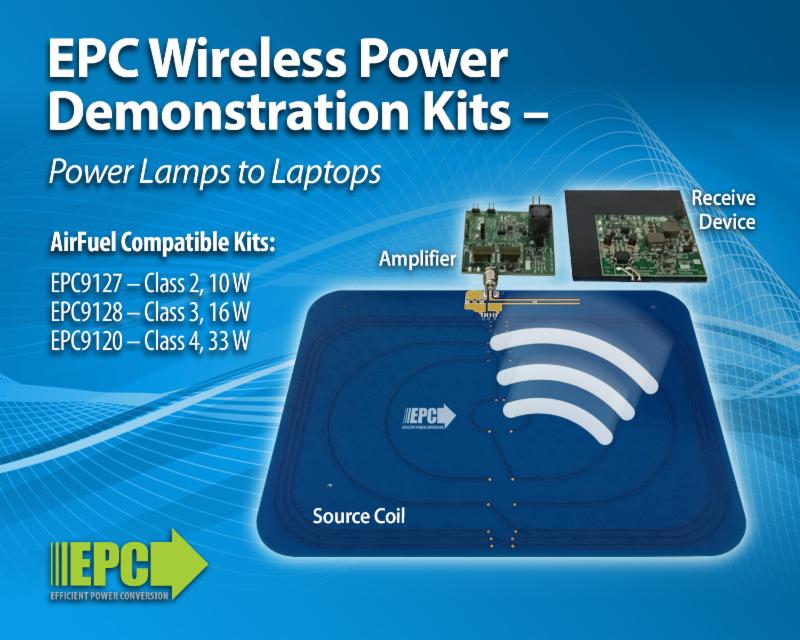 Efficient Power Conversion Corporation (EPC) announced the availability of two new demonstration kits - the EPC9127, a complete wireless power kit including a 10 W, class 2 amplifier, category 3 receiver device and the EPC9128, consisting of a 16 W, class 3 amplifier and two receiver devices (categories 3 and 4).
These systems, coupled with previously announced EPC9120, 33 W class 4 and the EPC9121 multi-mode kit capable of operating to either an AirFuel Class 2 standard with a category 3 device or a Qi (A6)/PMA standard with a compatible receiving device provide a full range of wireless power demonstration kits to allow for complete, wide-spread implementation.
With the introduction of these demonstration kits, EPC covers a wide range of the AirFuel resonant technology standard. The popularity of resonant wireless power transfer is increasing rapidly, with end applications evolving quickly from mere cell phone battery charging, to the powering of large surface areas where handheld tablets, laptops, and computers - and, soon TV sets, lamps, other electrically powered appliances - simultaneously anywhere on the surface.


The purpose of these demonstration kits is to simplify the evaluation process of using eGaN FETs and ICs for highly efficient wireless power transfer. The kits, operating at 6.78 MHz (the lowest ISM band) utilize the high frequency switching capability of EPC gallium nitride transistors to facilitate wireless power systems. The efficiency of these systems is about 87% from input to the amplifier to the output of the receiver (end-to-end), and with future improvements in architecture and GaN IC technology this
number can reach into the 95% range.
http://epc-co.com