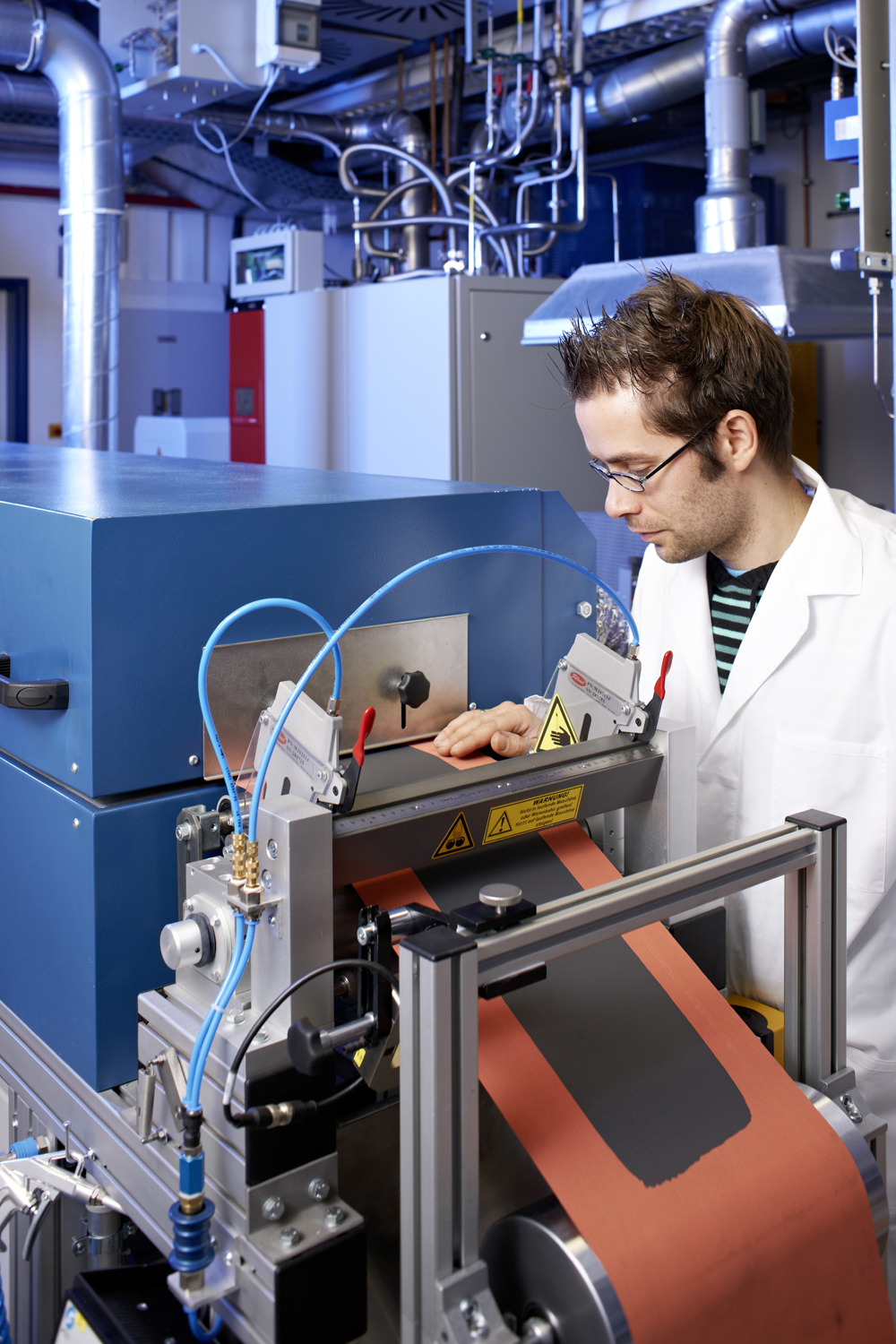 Roll-to-roll electrodes: scientists have optimized the anode and cathode for lithium-sulfur batteries.

here are currently over 40 million cars on Germany's roads. Only a fraction of them are powered by electric energy - around 6,400 vehicles according to the Federal Ministry of Transport, Building and Urban Development. The comparatively short range of electric cars doesn't help their popularity, with drivers often having to start the search for a charging station after a mere 100 kilometers, not to mention the high price of the batteries, which cost several thousand euros. Remedying this situation has researchers looking at new options in developing more efficient technologies. An extremely promising avenue of research is the lithium-sulfur battery, which is significantly more powerful and less expensive than the better-known lithium-ion battery. Although their short lifespan has made them unsuitable for use in cars before now, this may be about to change in the foreseeable future. Scientists at the Fraunhofer Institute for Material and Beam Technology IWS in Dresden have developed a new design that increases the charge cycles of lithium-sulfur batteries by a factor of seven. "During previous tests, the batteries scarcely crossed the 200-cycle mark. By means of a special combination of anode and cathode material, we have now managed to extend the lifespan of lithium-sulfur button cells to 1,400 cycles," says Dr. Holger Althues, head of the Chemical Surface Technology group at IWS, who is delighted with his team's breakthrough. The anode of the team's prototype is not made from the usual metallic lithium, but from a silicon-carbon compound instead. This compound is significantly more stable, as it changes less during each charging process than metallic lithium. The more the structure of the anode changes, the more it interacts with the liquid electrolyte, which is situated between the anode and the cathode and carries the lithium-ions. This process causes the liquid to break down into gas and solids and the battery to dry out. "In extreme cases, the anode "grows" to reach the cathode, creating a short circuit and causing the battery to stop working altogether," explains Althues. The interplay between anode and cathode is the critical factor determining the performance and lifespan of a battery. In the lithium-sulfur model, the cathode is composed of elemental sulfur. The advantage here is that unlike cobalt - the main cathode material used in lithium-ion batteries - sulfur is available in almost unlimited quantities and is therefore cheaper. The problem remains, however, that sulfur also interacts with the liquid electrolyte, which impairs the performance of batteries and, in the worst case, causes them to lose capacity entirely. The IWS researchers are using porous carbons to slow down this process. "We have precisely altered the pores to allow the sulfur to lodge there, slowing down the rate at which it combines with the electrolyte," clarifies Althues. He and his colleagues have developed a method of manufacturing these special cathodes. The experts at IWS measure the capacity of a battery in watt-hours per kilogram (Wh/kg). Over the long term, they expect lithium-sulfur batteries to reach an energy density of up to 600 Wh/kg. For comparison: the maximum energy density of the lithium-ion batteries currently in use is a mere 250 Wh/kg. "In the medium term, figures around the 500 Wh/kg mark are more realistic. In practical terms, this means you can drive twice as far with the same battery weight," says Althues. This of course implies that significantly lighter battery models are possible - an interesting prospect not only for automakers but for smartphone manufacturers too. After all, the overall weight of smartphones would be greatly reduced if they had lighter batteries. "Lithium-sulfur technology might even make electric flying a realistic possibility. Although such progress is still a long way off," adds Althues. The researchers are currently working on further optimizing the material and using it in larger battery models. They are also turning their attention to suitable manufacturing methods. And with good reason, as this is the only way the technology will reach a mass market, leading to a significant increase in the number of electric cars on Germany's roads. Fraunhofer Institute