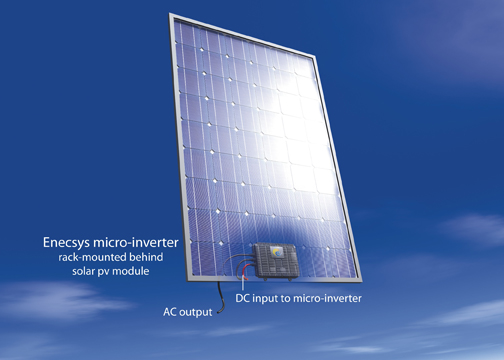 Enecsys Limited will showcase its high reliability solar PV micro-inverter and monitoring system on Booth 1043 at Solar Power International 2010, October 12-14, held at the Los Angeles Convention Center. The SMI series 200/240/280 Watt micro-inverters, first announced in May 2010, use patented technology developed at Cambridge University, UK, that is based on a rugged topology which eliminates the most unreliable and life-limited components found in other micro-inverters, such as aluminum electrolytic capacitors and opto-isolators. By replacing the electrolytic capacitors with long-life film capacitors, and removing opto-isolators, Enecsys micro-inverters are the first commercially available inverters of this type with greater than 25 years' life expectancy. Their reliability has been verified in accelerated life tests to IEC61215, the same methodology used to test solar modules (panels). Furthermore, Enecsys micro-inverters maintain full performance from -40 degrees C to +85 degrees C. This is an important consideration in real-world operating conditions on commercial and residential rooftops. The Solar Power International show also sees the announcement of a new product line from Enecsys with the world's highest power density for a single micro-inverter. The first product in this family, the SMI-360Watt-D ('DUO'), will be available for sale in the first quarter of 2011. The DUO products control power from two solar modules, by using Enecsys' patented topology enabling full MPPT from both solar panels maximizing energy harvest. The new products deliver an improved efficiency of greater than 95% CEC with the same high reliability and lifetime, compact footprint and ease of installation as the existing products. Further, the Duo will deliver system price/performance comparable with string inverters. Enecsys is working towards the industry's first open interface standard between solar PV panels and its micro-inverter enabling integration onto solar panels from multiple manufacturers. This product is scheduled to be available the second half of 2011. The Enecsys micro-inverter is designed to operate in both North American (60Hz) and European (50Hz) electricity grid systems. The micro-inverters are safety and EMC evaluated to EN 62109, UL1741, TUV and CE. Country-specific requirements, including VDE V 0126-1: 2006 compliance, are achieved through the use of specific Enecsys installation products. Enecsys micro-inverters come with a 20-year warranty. The Enecsys monitoring system consists of a proven and robust ZigBee wireless system integrated into the micro-inverters which connects to the Internet via the Enecsys Gateway in order to provide detailed performance information of each solar module from anywhere. Such comprehensive monitoring, which is not available with conventional inverter systems, gives users and installers detailed, real-time information to ensure that the solar system is operating with optimized performance over the life of the installation. The advantages of micro-inverters over string inverters are now widely acknowledged. These include 10 to 20% greater energy harvest through the use of an electronic technique known as Maximum Power Point Tracking (MPPT) from each solar module, simplified solar system design and installation, enhanced performance monitoring, and improved safety. A further advantage of the Enecsys micro-inverter - due to its unique and patented technology - is its significant increase in lifetime and reliability. www.enecsys.com