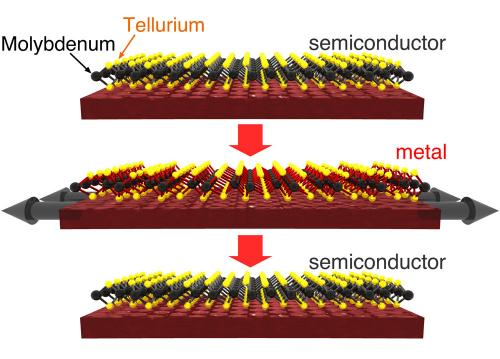 Do not fold, spindle or mutilate. Those instructions were once printed on punch cards that fed data to mainframe computers. Today's smart phones process more data, but they still weren't built for being shoved into back pockets. In the quest to build gadgets that can survive such abuse, engineers have been testing electronic systems based on a new materials that are both flexible and switchable – that is, capable of toggling between two electrical states, on-off, one-zero, the binary commands that can program all things digital.

Now three Stanford researchers believe that they've discovered just such a flexible, switchable material. It is a crystal that can form a paper-like sheet just three atoms thick. Computer simulations show that this crystalline lattice has the remarkable ability to behave like a switch: it can be mechanically pulled and pushed, back and forth, between two different atomic structures – one that conducts electricity well, the other that does not.

"Think of it like flicking a light switch on and off," says Karel-Alexander Duerloo, a Stanford Engineering graduate student and first author of an article in Nature Communications.

So far this discovery only exists as a simulation. But co-author and team leader Evan Reed, Assistant Professor of Materials Science and Engineering, hopes this work will inspire experimental scientists to fabricate this super-thin crystal and use it to create electronic and other devices that would be as light and flexible as fibers.