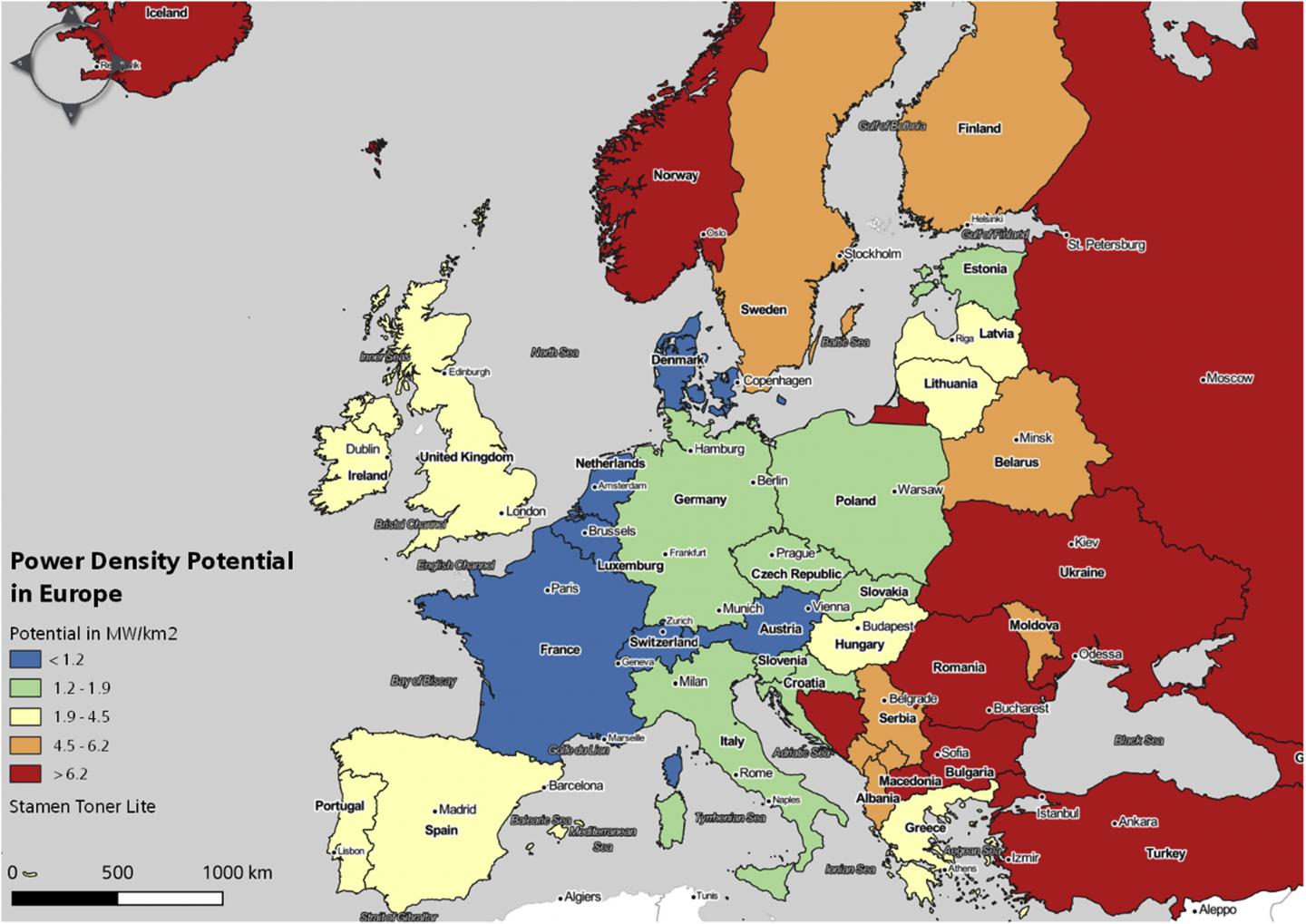 Map showing the power density potential for each European country.

Europe has the capacity to produce more than 100 times the amount of energy it currently produces through onshore windfarms, new analysis from the University of Sussex and Aarhus University has revealed.

In an analysis of all suitable sites for onshore wind farms, the new study reveals that Europe has the potential to supply enough energy for the whole world until 2050.

The study reveals that if all of Europe's capacity for onshore wind farms was realised, the installed nameplate capacity would 52.5 TW - equivalent to 1 MW for every 16 European citizens.

Co-author Benjamin Sovacool, Professor of Energy Policy at the University of Sussex, said: "The study is not a blueprint for development but a guide for policymakers indicating the potential of how much more can be done and where the prime opportunities exist.

"Our study suggests that the horizon is bright for the onshore wind sector and that European aspirations for a 100% renewable energy grid are within our collective grasp technologically.

"Obviously, we are not saying that we should install turbines in all the identified sites but the study does show the huge wind power potential right across Europe which needs to be harnessed if we're to avert a climate catastrophe."

Spatial analysis of Geographical Information System (GIS)-based wind atlases allowed the research team to identify around 46% of Europe's territory which would be suitable for siting of onshore wind farms.

The advanced GIS data at sub-national levels provided a far more detailed insight and allowed the team to factor in a far greater range of exclusionary factors including houses, roads, restricted areas due to military or political reasons as well as terrains not suitable for wind power generation.

The greater detail in this approach allowed the research team to identify more than three times the onshore wind potential in Europe than previous studies.

Peter Enevoldsen, assistant professor in the Center for Energy Technologies at Aarhus University, said: "Critics will no doubt argue that the naturally intermittent supply of wind makes onshore wind energy unsuitable to meet the global demand.

"But even without accounting for developments in wind turbine technology in the upcoming decades, onshore wind power is the cheapest mature source of renewable energy, and utilizing the different wind regions in Europe is the key to meet the demand for a 100% renewable and fully decarbonized energy system."

The study estimates that more than 11 million additional wind turbines could be theoretically installed over almost 5 million square kilometres of suitable terrain generating 497 EJ of power which would adequately meet the expected global energy demand in 2050 of 430 EJ.

The authors identified Turkey, Russia, and Norway as having the greatest potential for future wind power density although large parts of Western Europe were also considered ripe for further onshore farms because of favourable wind speeds and flat areas.

Mark Jacobson, Professor of Civil and Environmental Engineering at Stanford University, said: "One of the most important findings of this study, aside from the fact that it concludes that the European onshore wind potential is larger than previously estimated, is that it facilitates the ability of countries to plan their onshore wind resource development more efficiently, thereby easing the way for commitments by these countries to move entirely to clean, renewable energy for all purposes."