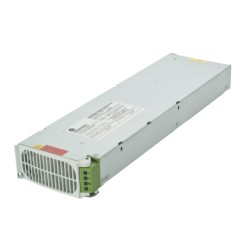 GE introduced its new CP3500 rectifier, the latest addition to its new rectifier product line, providing industry-leading power conversion density capabilities for data-hungry applications. The CP3500 is the industry’s first compact, 3.5-kilowatt (kW) AC to 48-volt DC rectifier in a 1U[1] module and provides a higher power-to-space ratio than traditional 2-3-kW rectifiers housed in similar 1U rack or cabinet mountings.

This improved power density, coupled with the CP3500’s power conversion efficiency of up to 96 percent, creates lower operating costs and improved total cost of ownership for data center, telecommunications, networking and big data supercomputing applications. Customers can apply this density gain to deploy systems that provide up to 14 kW in 1U of rack space — 2 kW more than competing 3-kW rectifiers.

“Data center and telecommunication designers looking for single-phase power supplies wrestle with the constant pressure to increase power capacity while optimizing their facilities’ physical space,” said Karim Wassef, general manager of Embedded Power, GE’s Critical Power business. “Increasing power output to 3.5 kW in a 40 watt/inch3 package translates to better power capacity with more design flexibility in less space. Both the compactness and higher power capacity of the CP3500 make it ideally suited for upgrade and retrofit applications where more power is required in the same or smaller footprint.”

GE developed its rectifier product line using FastWorks methodologies, a set of tools and principles that integrate external thinking and discussion into the design process, bringing products to market faster than previously possible. Using FastWorks, GE was able to take feedback from customers regarding their power needs and their space limitations and directly apply it to the design of its new rectifiers. For example, in many applications, the installation of power supplies required customers to increase the size of their box or equipment to accommodate the unit size. In addition, the amount of power capability per bay in the telecommunications industry is reaching a finite limit. With this information, GE was able to design a new rectifier with a smaller footprint and thus, a higher power density — providing customers with the technology they require to address these issues.