The most important factor of wireless charging is that it is efficient and safe. 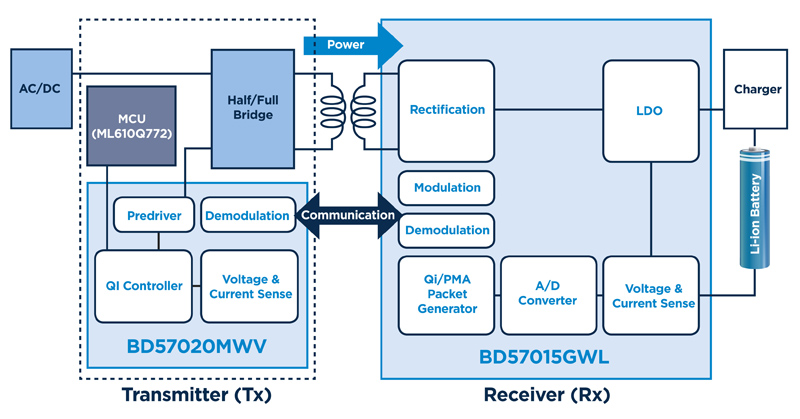 In the more compact portable and wearable devices now being introduced onto the market, it is extremely difficult, or even impossible, to incorporate a charge connector. For example, some may simply have too little available space in which to house an appropriate connector. Other devices may require sealed enclosures to protect sensitive electronic circuits from adverse environments and allow convenient cleaning or sterilisation, while for medical wearables replacing a battery could require invasive surgery with risks to patient health thereby being entailed.

Many state-of-the-art battery-powered devices provide for the possibility of charging without the physical connection to a power supply through the use of wireless power transfer (WPT).The extraction of electro-magnetic energy by an antenna from the impact of external radiation is the basis of wireless communications and WPT. Maximum energy transfer is ensured when the antenna has adaptive conjugate properties, i.e. when it is resonant and has a coupling with the free space equal to that of its load. This condition, however, can be easily influenced by changes in the environment, thereby preventing optimal functioning of a WPT system.

The BD57015GWL and BD57020MWV from ROHM are wireless transmitter and receiver devices respectively. Made of ferrite cores, they use inductive magnetic coupling and require precise alignment between primary and secondary coils to achieve a secure connection. Movement restriction limits the use of this technology in portable electronic devices due to difficulties when it comes to maintaining high levels of efficiency and the weight of the cumbersome magnetic materials required. Starting from the basic principles expressed in inductive coupling, it is possible to increase the transmission distances through the technique of resonant magnetic coupling. Highly effective wireless power transfer is achieved by magnetic resonance, which uses oscillating magnetic fields to exchange energy. A sizeable inductive spiral excited by a radio frequency (RF) source can exploit its resonance to induce a resonant mode in another similar structure, placed at a certain distance. In this way, a power transfer is obtained, without using a radiative field, on a distance that can even be 4 times the size of the spiral. The absence of ferrite cores make them lighter, and therefore easier to integrate. The efficiency is less than the inductive coupling, but still sufficient to guarantee its use with acceptable quality standards.

Interoperability between various devices is made possible thanks to the presence of open standards, developed by the cooperation of various companies. The Wireless Power Consortium (WPC) developed the Qi system for the inductive transfer of electricity. It operates at frequencies between 100kHz and 200kHz, and consists of two primary modules - namely the base station and the mobile device. Its architecture is represented in Figure 2. 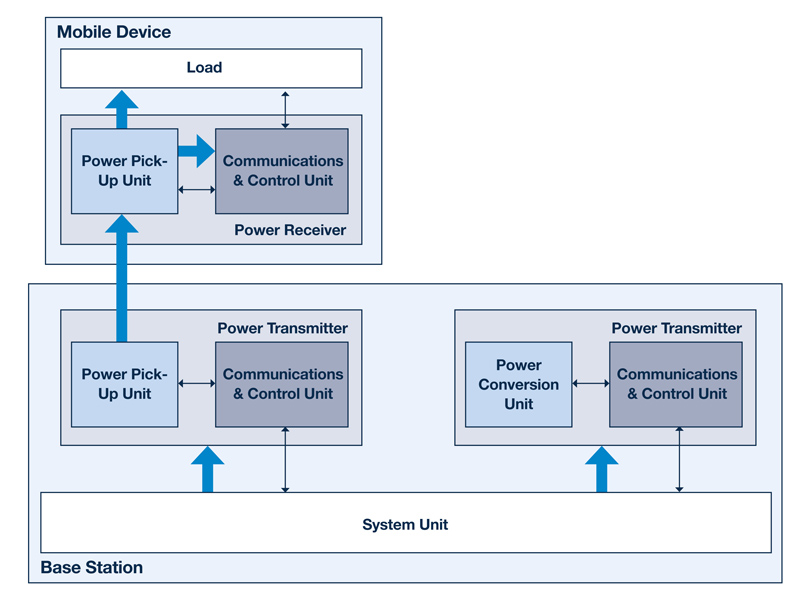 The Qi standard defines the detailed requirements for the coils in the transmitter, the covering materials, the geometries and the electrical characteristics. This means that the products of different manufacturers are fully interoperable.

The base station can include one or more power transmitters, while the mobile device contains a single power receiver. The power transfer is obtained by inductive coupling between the primary and secondary coils. These coils realise a resonant transformer in the air. This is able to transfer electric power with an efficiency that is comparable to those of a metal conductor.

The transmitters and receivers from the main microelectronic companies perform all the key control functions, ensuring compliance with the most critical standards on the market and providing customers with certified turnkey Qi solutions. The STWLC family of receivers from STMicroelectronics can efficiently charge any battery, such as single-cell Li-ion or Li-polymer, and support direct charging. The STWLC04 is an integrated wireless power receiver suitable for use in wearable applications. It is designed for 1W power transfer based on the Qi protocol, with digital control and I2C interface for a high degree of personalisation. Efficient power transfer is enhanced by keeping power consumption low while waiting for a receiver, plus the foreign object detection (FOD) function maximises safety. This is complemented by the STWBC-MC 15W wireless battery charger transmitter - which can control multiple charging coils. Compliant with the latest Qi 1.2.4 specifications, it is specifically designed to support the Qi MP-A15 extended power profile (EPP) topology.

NXP's NXQ1TXH5 has a dedicated analogue ping circuit to detect devices available according to the Qi standard. It offers a fully integrated transmitter solution that includes a 5V full-bridge power stage to drive a Qi transmitter coil directly, as defined in the Qi A5, A11, A12 and A16 5V standards.

Texas Instruments’ TIDA-00881 is designed to add the Qi-compliant wireless power functionality to other low power boards available from the company. It employs a 19mm loop, with a wireless receiver that is compatible with the Qi protocol. For charging, it is sufficient to position the coil on any wireless charger, and thus to recharge a 3.6V battery. This battery will manage the Launchpad with 3.3V and provide 5V for any additional modules (see Figure 4). Texas Instruments offers in its design the use of a LIR2032 Li-ion cell. This can supply an ongoing maximum current of 50mA (with peaks up to 60mA). Another design solution for initial prototyping purposes is the IDT WP3W-RK. This is suitable for wireless applications ranging from 0.5W to 3W. The reference kit includes both the transmitter (P9235A-R-EVK) and the receiver (P9027LP-R-EVK) elements and offers up to 80% system efficiency at 3W.

WPT clearly has all the features needed to revolutionise the electronics market - enabling efficient power transfer in a far more convenient manner. Future developments of this technology are mainly destined to focus on extending its scope to serve medium and high-power applications. This should allow it to prove its long-term value to modern society.