·       V1G – In this technology, known as smart charging, the utilities individually distribute the energy to minimize demand peaks in two ways; by controlling the time when charging an EV starts, and the magnitude of power supplied.

·       V2G – Bi-directional charging controls the charging time, power, and direction. For example, to reduce peak demand, the utility could pull some power from a fully charged battery back to the power grid to supply it to another vehicle.

The V2G approach can be very cost-efficient for vehicle fleets, as contributing to peak-shaving would be considered a valuable service. Case in point, most school buses run only during the day and are available for charging and sharing power all night. A more extensive fleet, like the 500,000 school buses operated in the United States, could be controlled as highly decentralized energy storage. The available battery capacity can grow to a regime of GWh during the 100 days of US summer vacation idle time. To accommodate the V2G technology, today's designers need to develop bi-directional chargers that can also supply energy to the power grid.

In contrast to discrete packages, isolated packages allow the mounting of multiple packages onto a common heatsink. Because of their low profile, they offer a more compact design by minimizing the overall height of the subunit compared to their 12- or 17-mm power-module counterparts. Furthermore, using a top-cooling side featuring high insulation strength, there is no need for additional isolation foil between the device and heatsink, making the assembly process easier and less costly.

An example of the packaging options and their power handling capability is given in Figure 2. These packaging options are rated by the output power and thermal dissipation as well as the printed circuit board (PCB) layout complexity and assembly difficulty. The surface-mounted power device (SMPD) provides the designer with the best combination of power capability, power dissipation, and ease of layout and assembly.

EV charging system designers can use SMPDs to house various chip-technologies, incorporating various voltage classes and circuit topologies, including half-bridges. An example of the SMPD packaging is depicted in Figure 3. The SMPD package features:

·       a plastic molding compound around the semiconductor. 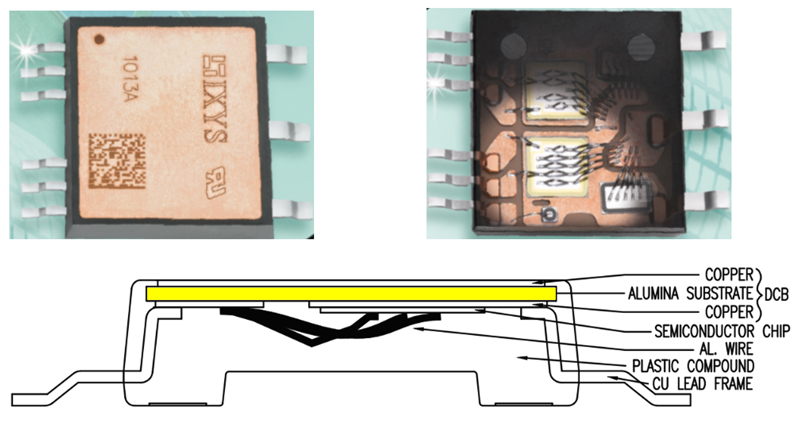 The design of the SMPD package in this example offers several advantages:

·       Reduced radiated EMI due to low parasitic coupling capacitance between the semiconductor die and the heatsink.

·       Maximized utilization of the semiconductor's capabilities and low voltage-overshoot result from the package's low stray inductance.

·       There is greater flexibility in enabling customized topologies, including thyristors, power diodes, MOSFETs, and IGBTs.

·       Because of the isolated backside, all power semiconductors can mount onto a single heat sink.

As Figure 4 illustrates, the SMPD package is available in two versions, SMPD-X and SMPD-B. The SMPD-X contains a single switch, single diode, or Co-Pack to cover higher power demand in one package. The SMPD-B allows building blocks in a wide variety of voltages, currents, and technologies such as MOSFETs, IGBTs and thyristors in a variety of topologies.

Both versions have the same package dimensions of 25 mm length and 23 mm width and share a common footprint and mounting area.

A 19-inch rack, built with two Height-Units (2HU) and a length of 880 mm for EV charging subunits is ubiquitous in the industry. When using low-profile SMPD packages, as an example, the design exhibit roughly a 13 percent volume saving compared to E2, and E3 Package in a 19-inch 2HU rack configuration, resulting in more space for passive components such as power magnetics and decoupling capacitors.

In case even higher power levels are targeted, the SMPD is also available with single-switch arrangements for IGBT and SiC MOSFETs. Once designs demand higher voltages, package options up to and exceeding 1700 V are readily available.

The goal: Smaller packages with higher power
By incorporating SMPD packaging, designers can increase the power of their EV chargers, thus improving power density and efficiency. SMPDs enable designers to develop single power units with output as high as 50 kW without paralleling components. Using SMPD power components helps lower the manufacturing cost by using fewer components. Surface-mounted package designs like those from Littelfuse can minimize heatsink size and cost with low thermal resistance packaging technology. Using this packaging can lower both radiated and conducted EMI with lower parasitic capacitance and stray inductance. The designer can also use smaller inductors by operating at higher frequencies, further saving space and cost.