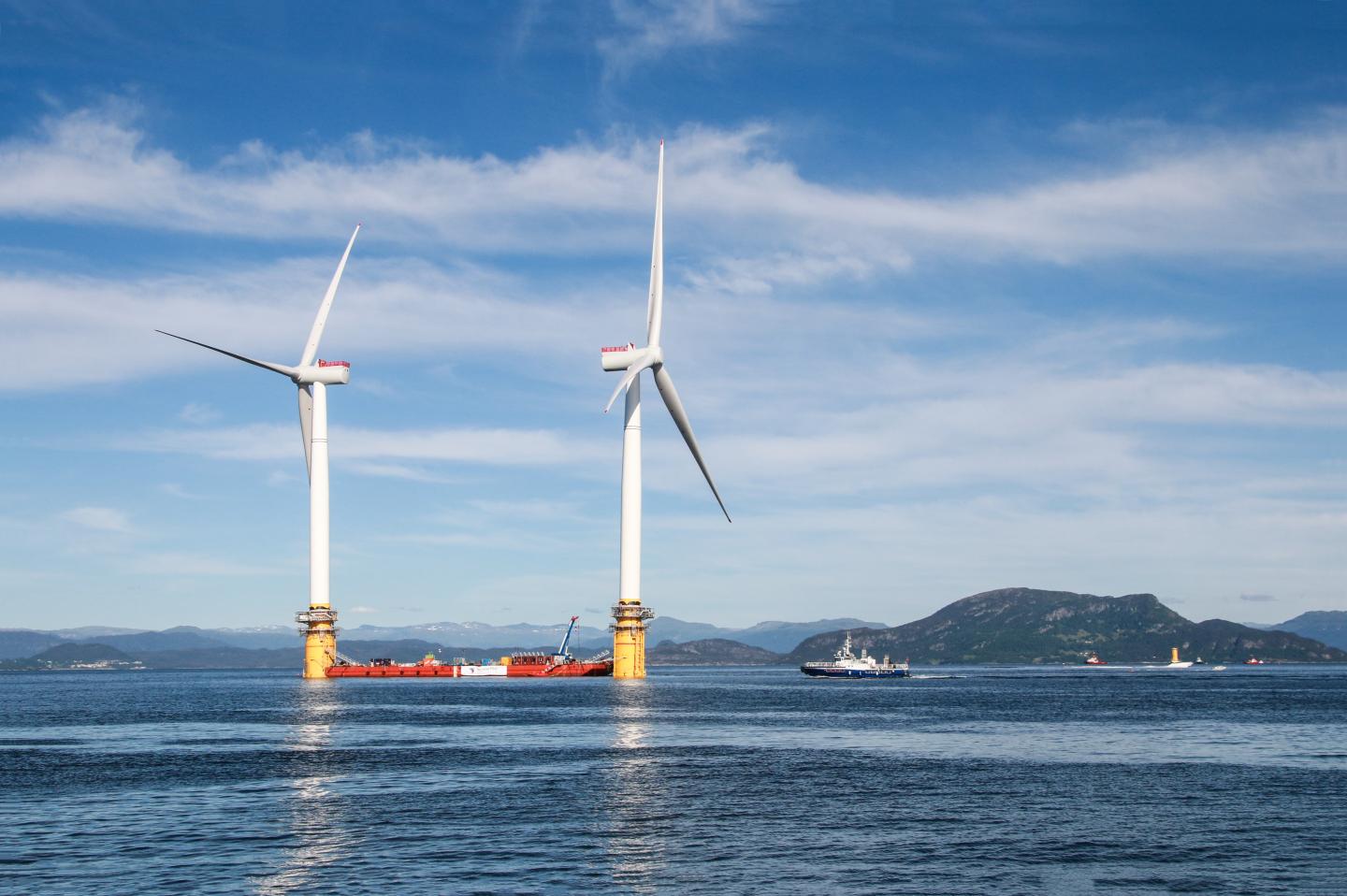 Two floating wind turbines being prepared to sail to Hywind Scotland Pilot Park off the coast of Aberdeenshire.

Washington, DC -- There is considerable opportunity for generating wind power in the open ocean, particularly the North Atlantic, according to new research from Carnegie's Anna Possner and Ken Caldeira. Their work is published by Proceedings of the National Academy of Sciences.

Because wind speeds are higher on average over ocean than over land, wind turbines in the open ocean could in theory intercept more than five times as much energy as wind turbines over land. This presents an enticing opportunity for generating renewable energy through wind turbines. But it was unknown whether the faster ocean winds could actually be converted to increased amounts of electricity.

"Are the winds so fast just because there is nothing out there to slow them down? Will sticking giant wind farms out there just slow down the winds so much that it is no better than over land?" Caldeira asked.

Most of the energy captured by large wind farms originates higher up in the atmosphere and is transported down to the surface where the turbines may extract this energy. Other studies have estimated that there is a maximum rate of electricity generation for land-based wind farms, and have concluded that this maximum rate of energy extraction is limited by the rate at which energy is moved down from faster, higher up winds.

Possner and Caldeira's sophisticated modeling tools compared the productivity of large Kansas wind farms to massive, theoretical open-ocean wind farms and found that in some areas ocean-based wind farms could generate at least three times more power than the ones on land.

In the North Atlantic, in particular, the drag introduced by wind turbines would not slow down winds as much as they would on land, Possner and Caldeira found. This is largely due to the fact that large amounts of heat pour out of the North Atlantic Ocean and into the overlying atmosphere, especially during the winter. This contrast in surface warming along the U.S. coast drives the frequent generation of cyclones, or low-pressure systems, that cross the Atlantic and are very efficient in drawing the upper atmosphere's energy down to the height of the turbines.

"We found that giant ocean-based wind farms are able to tap into the energy of the winds throughout much of the atmosphere, whereas wind farms onshore remain constrained by the near-surface wind resources," Possner explained.

However, this tremendous wind power is very seasonal. While in the winter, North Atlantic wind farms could provide sufficient energy to meet all of civilization's current needs, in the summer such wind farms could merely generate enough power to cover the electricity demand of Europe, or possibly the United States alone.

Wind power production in the deep waters of the open ocean is in its infancy of commercialization. The huge wind power resources identified by the Possner and Caldeira study provide strong incentives to develop lower-cost technologies that can operate in the open-ocean environment and transmit this electricity to land where it can be used.