The turnkey approach can be ideal for ensuring a successful project

Substation expansions can become extremely complicated when space is limited. That’s when use of high voltage underground cable comes into its own as a viable option. What makes the option even more favorable is a turnkey approach, in which the high voltage underground cable provider provides the cable, terminations, and testing and documentation.

At a recent substation expansion project located near Buffalo, NY, where expansion of a substation yard and extension of an overhead 115 kV bus was impracticable and relocating facilities within the substation was impractical, Seymour, CT-based Kerite Company provided turnkey underground cable installation services that allowed new capacitor banks to be installed and energized in a reasonable amount of time and for reasonable cost.

NYSEG, a subsidiary of Iberdrola USA, needed to add capacitor banks to improve the electrical system to handle load growth in the Buffalo NY area. The utility, which serves 877,000 electricity customers and 261,000 natural gas customers across more than 40 percent of upstate New York, chose to install two new 115 kV, 25 MVAR switched capacitor banks at Big Tree Substation, an older facility constructed in the 1940s. The substation feeds the Ralph Wilson Stadium, home of the Buffalo Bills, and new capacitor banks were important for ensuring overall system improvements and supporting system voltage in the area (see Figure 1). 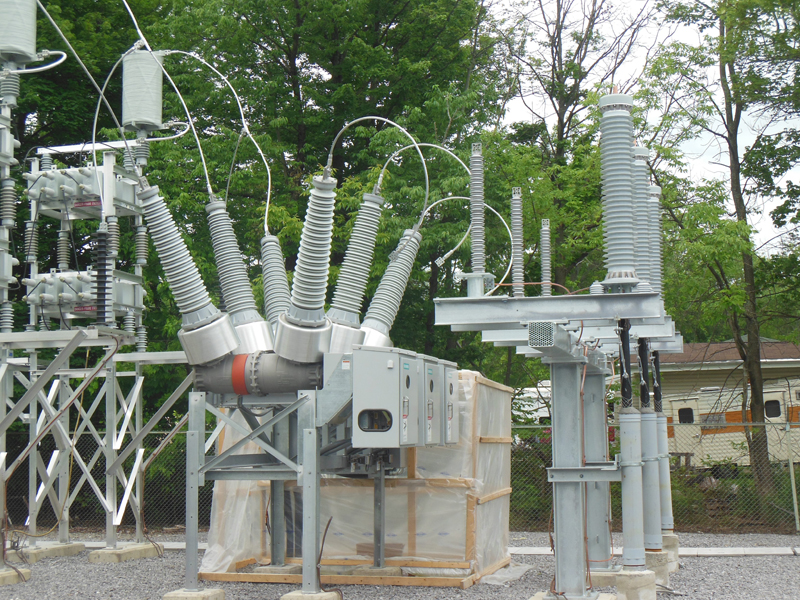 Consulting engineers Laramore, Douglass and Popham were brought in to design the project. The company provides engineering for investor-owned and cooperative utilities, and works on everything from wind farms to industrial clients. Senior substation engineer Stan Bail explains that, while the Big Tree Substation seemed large, it was actually impossible to add both banks above ground as is commonly done with substation expansions. There was a wide-open space on the south side, but the north side was very close to a fence, with a house just outside the fence.

According to Bail, they had room within the substation fence if they could have gotten the overhead wire bus extended to the area where the capacitor banks would fit. The issue was that NYSEG needed two capacitor banks and two breakers. Since the bus was split, with one on the north end and one on the south end, the best solution would be taking the two locations from overhead to underground. They then ran the underground cable, coming up at one central location, terminating the underground cable and connecting to two different circuit breakers and two different capacitor banks. The solution was an uncommon one for a substation; underground cable transmission lines are more frequently used when an airport is nearby and it is important to keep circuits from interfering with airport operations (see Figure 2).

The design included a conduit system to facilitate cable pulling from the bus area to the capacitor bank, including a conduit plan showing how and where to place the 6-inch PVC conduit, with one conduit per cable per phase. After the conduit system was installed, Kerite brought the cable to the site for electrical subcontractor Northline Utilities to do the cable pulls. Instead of working with one large 1300 foot reel, Kerite cut each run individually to length on smaller reels, which are easier to store and make pulling the individual runs much faster and simpler. This allowed the subcontractor the flexibility of pulling one phase and leaving it if necessary, then returning the next morning to pull the next phase.

Because of the complexity of the project, Bail was especially attracted by the turnkey installation services Kerite offered, including supplying the cable, doing the terminations, and conducting the testing. The testing included both high voltage DC high potential testing at the factory to ensure that there were no defects, and additional lower voltage field-testing.

“There was a great deal of cooperation between Kerite and Northline Utilities onsite,” said Bail. “When you are terminating cables it is extremely important to avoid any wet conditions. Each one of the terminations took hours of sanding and dressing the cable after it was pulled, and Kerite needed a shelter to keep the wind, mist and rain off while doing the terminations. Northline built a shelter to keep them dry so they could keep working through whatever conditions the weather threw out there.”

He adds that he plans to use Kerite for another capacitor bank in the Rochester, NY area, where underground cable is needed because there is no space to expand the substation. “When you are limited by space, underground high voltage cable is a viable option when compared to other more expensive substation expansion alternatives.”