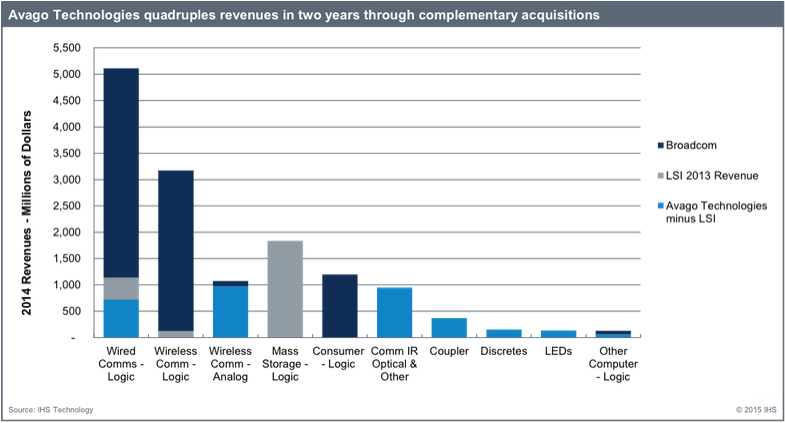 The strength of the merged Avago/Broadcom in the wired communications market positions it to benefit from the strong projected market growth.

Merger activity in the semiconductor industry moved to a new level with the announcement of the agreement for Avago Technologies to acquire Broadcom, according to IHS, a leading global source of critical information and insight. The deal, which is valued at $37 billion in cash and stock, will create a new company valued at $77 billion.

“This is the latest and, by far the largest, merger in the semiconductor industry, as major players continue to move in an aggressive way to establish position and profitability in key segments of the industry,” said Dale Ford, vice president and chief analyst for IHS Technology. “Investors have responded favorably to the announcement, with promised bottom-line benefits derived from realized cost savings.”

Quadrupling in size in two years

This latest move from Avago Technologies has formed a company with revenues four times greater than in 2013. The two biggest recent mergers by Avago Technologies were the acquisition of LSI in 2014 and this new acquisition of Broadcom. The mergers increase the company’s strength in the communications and storage categories. Outside of these two areas, Broadcom has a much smaller presence in consumer electronics and industrial electronics and almost no revenue from other data processing and automotive electronics.

The newly merged Avago-Broadcom will dominate the market, commanding 40 percent of the wired communications IC market, excluding memory. Revenues for this category in 2014 were more than five times larger than the next largest supplier, Intel.

The strength of the merged Avago/Broadcom in the wired communications market positions it to benefit from the strong projected market growth. The five-year compound annual growth rate (CAGR) for wired communications is 7 percent, leading all other market segments. On the other hand, semiconductors used in wireless communications products is projected to go through a period of weak growth at only 2 percent CAGR over the next five years. “The size of the combined company could give it a strong position to increase its market share over this time,” Ford said.

The companies predict $750 million in annual cost synergies in 18 months. A quick look at the distribution of their revenues shows that 66 percent of Avago Technologies’ revenue comes from products shipped to the Asia-Pacific (APAC) region, for use in electronics production. Broadcom derived 93 percent of its revenues from APAC shipments of its ICs. “The alignment of the supply chain between the two companies will facilitate the projected savings,” Ford said.