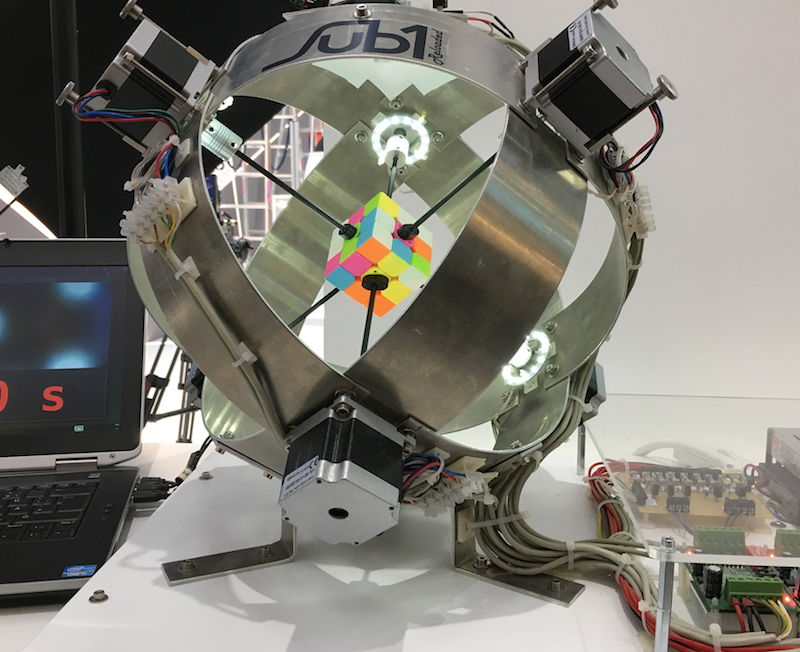 The Rubik’s Cube was solved in just 637 thousandths of a second: At the electronica trade fair, the machine “Sub1 Reloaded” pulled off the feat with the help of microchips from Infineon. The microcontroller AURIX™, one of the world’s most powerful minicomputers, also contributed to the record-breaking effort: It is one of the essential elements that enable autonomous driving. For the Rubik’s Cube, it achieved the best time in the approximately 30 years that have passed since the Hungarian Ernő Rubik invented the cube. It takes a human at least 4.9 seconds to solve the puzzle. That is the best time recorded for a so-called “speedcuber” listed in the Guinness World Records.

The six faces of the cube each have nine squares of a color that can be turned in opposing directions. The object is to rotate the faces until they have returned to the original position – without driving yourself crazy in the process. More than 43 quintillion combinations of the colored squares are possible. The same number of cubes could cover our planet in 275 layers of cubes. The Earth would then be covered with an approximately 20-meter-high layer of Rubik’s Cubes.

It takes tremendous computing power to solve such a highly complex puzzle with a machine. In the case of “Sub1 Reloaded”, the power for motor control was supplied by a microcontroller from Infineon’s AURIX™ family, similar to the one used in driver assistance systems. Minimal reaction times play an even greater role in autonomous driving. A high data-processing rate is necessary to ensure real-time capabilities with clock frequencies of 200 MHz. As a result of this ability, a vehicle can safely and reliably apply the brakes when it approaches a barrier.

The electronic version of senses, brain, and muscles

“Sub1 Reloaded” contains a number of other microchips. Like most devices we use every day, they link the real and digital worlds. The attempt started with the press of a button. The shutters of the sensor cameras were removed. The machine then detected the position of the elements. These had been previously scrambled, in accordance with the special requirements of the World Cube Association. The computing chip, or the “brain” of the machine, figured out the fastest solution and transmitted the necessary commands to the power semiconductors. These “muscles” then activated six motors, one for each side of the cube, at record speed and then brought them to a halt – all within the fraction of a second.

Every Rubik’s cube can be unscrambled with just 20 movements. A variety of algorithms can be used to solve the puzzle, the most well-known of which is the Fridrich Method. But Infineon’s constructor Albert Beer did not design his prodigy with the fewest moves in mind. Rather, he was intent on achieving the best time – he even allowed the “Sub1 Reloaded” a few extra moves to reach this goal.