LEDs Are Straight Shooters (But That's Not Always Good) 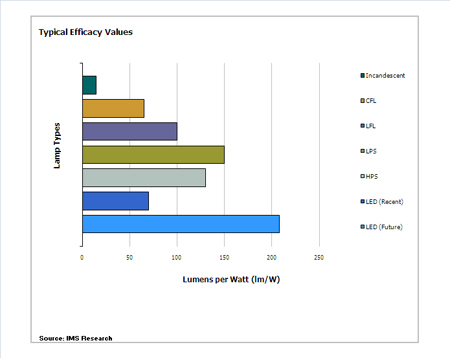 Lighting trade shows are shining a spotlight on the bright future of LEDs. Technology has now elevated LEDs to the point where they can take on the marquis role in light-emission - general illumination, lighting up our offices and streets and homes. Recent trade shows might lead an attendee to believe there is no other source of light, with supplier booths hawking almost nothing else but LED-based lamps and luminaires. Like yesterday's cause célèbre - the compact fluorescent lamp - new LED-based lighting promises huge dividends in energy savings and longer life. But also as with CFLs, LED lighting leaves something to be desired in some lighting applications. For all its promise, LED may not be embraced in key everyday lighting applications we take for granted. The core problem is directionality - a filament bulb casts light in every direction, but an LED emitter projects light only in one. That trait makes LED-based lamps a good fit for highly directional applications - recessed lighting, accent lighting, retail downlighting, street lighting. Indeed roadway lighting has proved to be an early target for LED conversion, with LEDs putting out no stray lumens above the horizon - and so not polluting the night skies. In terms of indoor products, the first against the wall in the LED revolution are likely halogen MR and PAR lamps. But LED lighting is a more debatable replacement for common A-19 bulbs and linear fluorescent tubes. A public accustomed to omnidirectional output lighting up all corners of a room may find the directionality of an LED device limiting and off-putting. Lamps designed with an array of emitters facing a variety of directions are not yet satisfying replacements for the incumbent technologies - and packing so many emitters into such a small space challenges the device's thermal management. Not so debatable is the potential energy savings from LEDs, a technology that's rapidly improving. A key metric in the lighting world is efficacy, or lumens-per-Watt. Current LED lamps have been clocking in about 70 lm/W, but the emitter efficacy record in the lab has reached 208 lm/W - recently announced by Cree. We may not see that number for a few years in LED-based lamps on the market, but LED products should soon pass the 100 lm/W we see with T-8 or T-5 fluorescent tubes. Bringing that kind of efficiency to as wide a market as possible may require us to solve the problem of diffusion: clever advancements may yet enable a pleasing and useful omnidirectional diffusion of LED emission.

A second approach is to rethink lighting design, tapping LEDs to put light where needed but with a design users can accept. Omnidirectional filament-bulbs, after all, cast lumens where they are not really needed - in the end, designing replacement LED bulbs for the installed based of sockets may not be the most effective use of LED technology. www.imsresearch.com