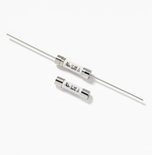 Littelfuse, a leader in circuit protection, has introduced two series of compact, high surge withstand fuses, both capable of withstanding up to 20 lightning-induced high current surges without performance degradation. The 328 and 688 Series Fuses offer protection superior to that of circuit breakers, providing short-circuit and overload protection and ensuring long-term reliability for outdoor applications that operate at high surge exposure levels. They also reduce the level of nuisance fuse tripping caused by indirect lightning surges. The 328 is optimized for outdoor LED lighting applications to protect surge protection devices (SPDs) and luminaries. Both the 328 and 688 can be used in power distribution equipment used in wireless telecommunication base transceiver stations. They are available in both cartridge and axial-leaded packages. The 328 series offer circuit designers an ideal overcurrent protection solution because it can be located at the AC input of outdoor luminaire assemblies, which is much closer to the potential point of damage than a utility line branch circuit breaker. Typical applications include commercial LED luminaries, outdoor LED luminaries used in parking lots, garages, roadways, and tunnels, and outdoor electronic equipment such as cameras, displays, etc. The 688 series is a slow-blow ceramic fuse with a remarkable breaking capacity (interrupting rating) of 2500A@70VDC, ensuring it will open safely under high fault currents to prevent explosion in fault situations. It is even smaller than the 328, which helps reduce board space requirements, minimizes cost, and simplifies installation. It can replace the circuit breaker typically used in wireless telecommunications base transceiver station (BTS) applications and is designed for use in power distribution units, remote radio heads, base band units, and surge protection device modules. "These are first fuses available with ultra high surge withstanding capability in such small bodies," said Roger Huang, Global Product Manager for the 328 and 688 Series product lines. "In the past, circuit designers could only use an ordinary fuse with a current rating that was much higher than the operating current, along with other current-limiting components downstream in the circuit, to provide marginally better protection against high current surge conditions. Littelfuse 328 and 688 Series fuses are the ideal solution for providing the best protection over conventional designs while also reducing board space requirements and costs." The 328 and 688 Series Fuses offer these benefits: -Enhances over-current and short-circuit protection; reduces power downtime caused by nuisance activation caused by indirect lightning surge -Small fuse body makes it easier to place in outdoor luminaire and telecom equipment in BTS and ISP datacenters -Ensures the fuse will open safely under high fault conditions -Suitable for high-temperature outdoor LED lighting or radio antenna applications Availability The 328 and 688 Series Fuses are available in quantities of 1,000 in bulk for both the cartridge and axial-lead packages. Littelfuse