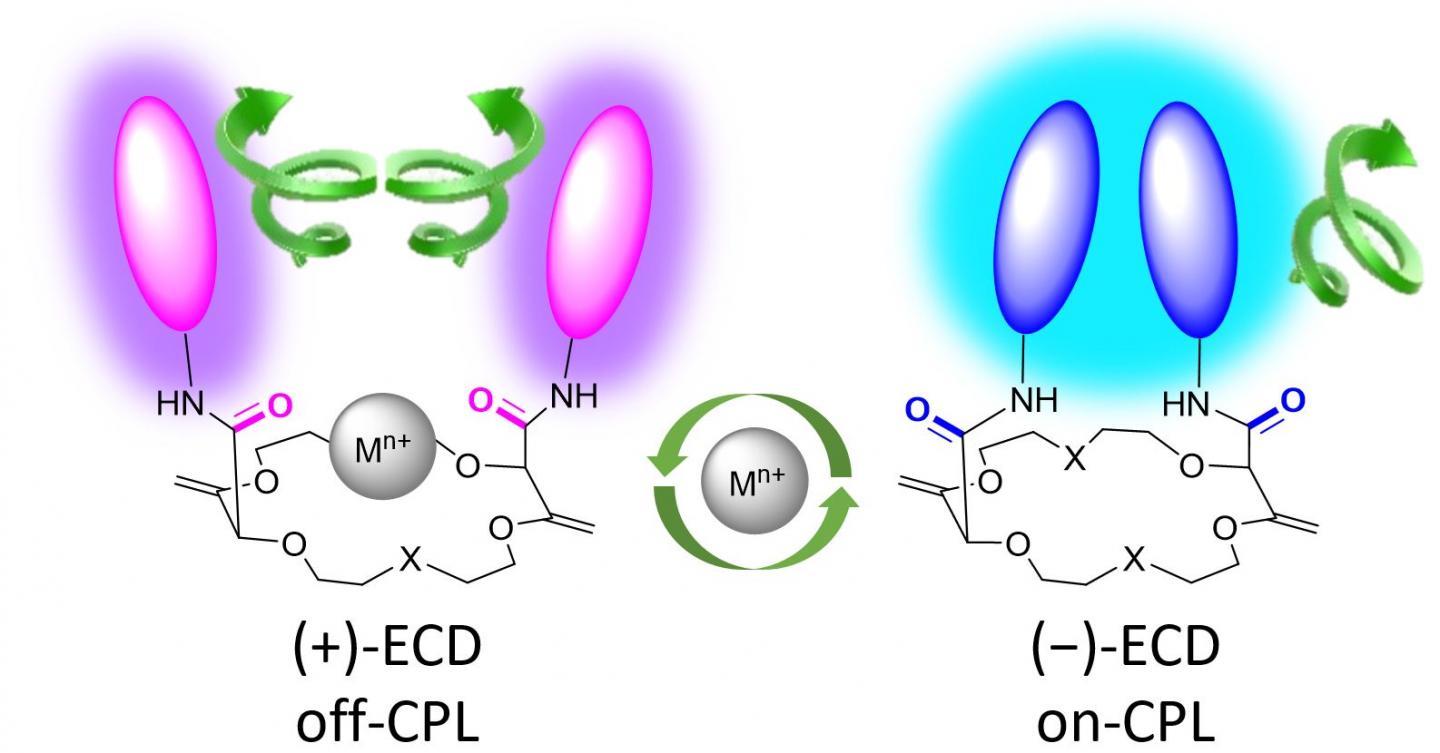 When a metal ion is inserted, the molecule changes geometry, acting as an on/off switch.

An international team, led by researchers from the University of Geneva (UNIGE), Switzerland, has designed a family of molecules capable of binding to metal ions present in its environment and providing an easily detectable light signal during binding. This new type of sensor forms a 3D structure whose molecules are chiral, that is to say structurally identical but not superimposable, like an image and its reflection in a mirror, or like the left and right hands. These molecules consist of a ring and two luminescent arms that emit a particular type of light in a process called Circular Polarized Luminescence (CPL), and selectively detect ions, such as sodium. This research can be read about in Chemical Science.

«The luminescent arms of our molecules function like light bulbs that light up or turn off depending on the presence of a positively charged ion, a metal cation,» explains Jérôme Lacour, Dean of the Faculty of Science at UNIGE and Ordinary Professor in the Department of Organic Chemistry. These molecules can be compared to small locks: when they are ready to operate and detect the presence of metals, they emit a particular type of light (circularly polarized). When a metal ion is inserted, it acts on them like a key, the lock geometry changes and the light disappears.

These «locks» are made up of two parts: a ring (a crown ether) that can encircle metal ions such as sodium, and two twisted arms that extend from the rim and act like light bulbs, allowing researchers to «see» whether metal ions are present or not. In the absence of metal ions, the two arms are close together and emit intense polarized luminescence. When a metal ion is inserted, the molecule changes geometry. The arms move apart and stop emitting light.

You can also «remove the key» by adding a scavenger molecule. The luminescence of both arms is then completely recovered. This on/off capability can be repeated over several on/off cycles, making these molecules effective and easy to read. The molecule thus behaves like a switch; it provides a clear signal whose practical applications could be numerous, starting with the detection of metals in the environment.

The design of such reversible switches generally involves the use of rare earths or other large complex supramolecular assemblies (polymers). «Our system is based on a small molecule of carbon, oxygen and hydrogen, and has the advantage of reacting to simple and naturally abundant cations like sodium,» says Jérôme Lacour. Despite the functional complexity of the molecules, this new type of sensor can easily be assembled through only two synthetic steps, which could be established after three years of research.