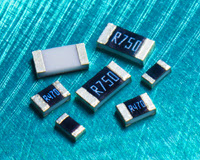 KOA Speer Electronics introduces the SR73-RT, a low resistance anti-sulfuration chip resistor. SR73-RT current sense resistors offer excellent anti-sulfuration characteristics due to the use of a special high sulfuration proof inner top electrode material and are designed for use in harsh environments with a high level of sulfur contamination.

The sulfuration of a chip resistor occurs when the silver-based inner electrode (used in standard resistors) reacts with sulfur found in high sulfur environments and thereby can lose conductivity. The resistor’s electrode can lose all conductivity and disconnect the circuit as sulfuration continues. KOA Speer’s RT series uses a sulfur resistant material to strengthen the electrode and adds a protective layer to serve as an anti-sulfur barrier. The SR73-RT series passes ASTM-N809 anti-sulfur testing (the industry standard anti-sulfur test).

SR73-RT current sense resistors are ideal for use in such as outdoor applications in mining, agricultural, winery, and oil rich environments.  It is also an excellent choice for use in automotive electronics and factory automation.