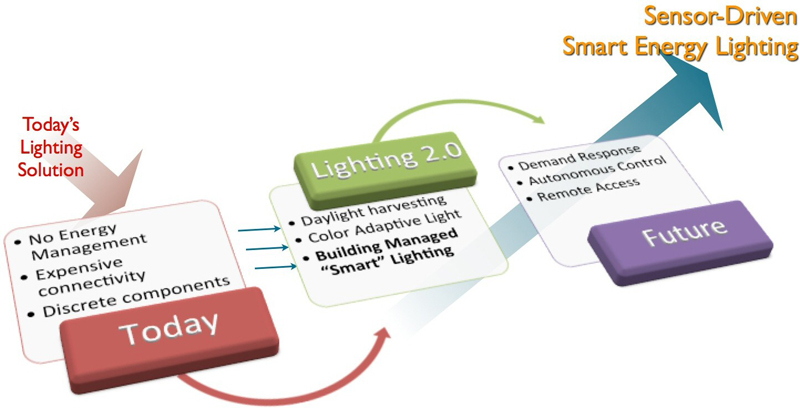 A significant percentage of a building's energy consumption is due to its lighting. Historically, lighting was a coarsely controlled power load, managed manually with a simple on-off switch. With the advent of low-cost PIR (passive infrared) detection, a small percentage of rooms now have automatic controls. This is, however, still a far cry from the vision of lighting controlled by building systems to substantially reduce energy consumption and provide highly optimized lighting for enhanced user comfort and experience. It has become too expensive to build additional power plants and leading energy-conscious countries and states, such as California, are demanding significant reductions in energy consumption over the next decade. California's Assembly Bill 32 requires that buildings reduce their energy consumption by 50 percent by 2018. Other building codes, such as California's Title 24, are even more specific, mandating energy reductions by exploiting daylight harvesting from windows and skylights. To this end, Title 24 requires implementation of automatic lighting controls. Of course, the US isn't the only locale to require greater efficiency in commercial lighting. The European Union is in the midst of an aggressive plan to phase out inefficient light bulbs, and has regulations for commercial lighting mandating automated timer controls. Lighting energy consumption Lighting accounts for some 40% of a typical commercial building's electric bill, and commercial lighting accounts for approximately 70% of all lighting energy (Reference 1). Other major energy consumers include HVAC (heating, ventilation, and air conditioning) systems, responsible for 40% of the commercial energy load and other mechanical items, such as motors, which consume 20%. HVAC systems came under building-network control in the 1980's. Proprietary control networks evolved to become standards-based networks, such as BACnet, KNX, and LONmark, which most building-control systems now use to connect to their HVAC systems. BACnet is an ASHRAE (American Society of Heating, Refrigeration, and Air-Conditioning Engineers), ANSI, and ISO standard communications protocol for building automation-and-control networks serving applications such as HVAC, lighting, and access controls and fire detection. Lighting-2.0 controls Unfortunately, today's lighting systems don't lend themselves to cost-effective control for energy management. These systems use discrete power components, PWM ICs, FETs, resistors, capacitors, and inductors. These elements are difficult to control. Lighting must take advantage of digital technologies (Figure 1). By integrating power electronics, control functions, and network interfaces, the lighting controller will drive energy savings for next-generation light sources like LEDs. 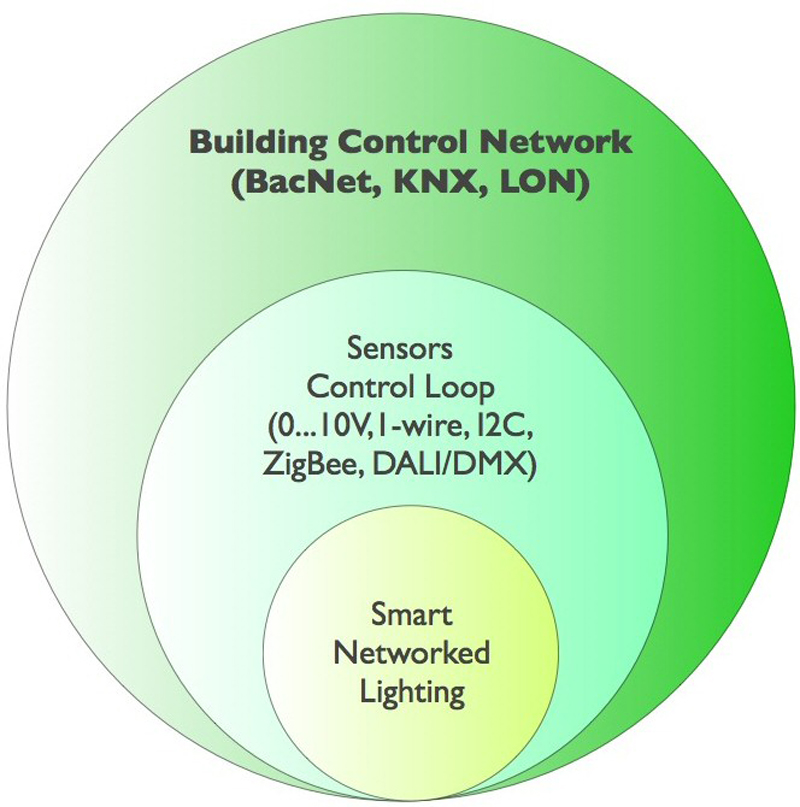 Building connected HVAC and lighting networks Lighting systems that allow dimming from zero to 100% and connect to building-network controls will enable demand response and autonomous control in large buildings. The system's awareness of the environment increases through the implementation of smart sensors that can detect occupancy and light conditions. That information feeds to the lighting controller, which sends the information via the building network to central building controls. The central control can automatically manage lighting and HVAC systems throughout the building based on time of day and occupancy (Figure 2). These smart sensor-driven network-connected lighting systems will provide significant energy savings. Consider for example underground parking garages where lights are on at full brightness 24x7. A network-controlled lighting system can automatically dim these lights by 50% or more when it observes no activity, potentially saving more than 50% in energy. These same sensor-driven network-connected lighting systems can also indicate which parking spaces are available through integrated proximity detection, alerting drivers to parking spaces, reducing gas consumption otherwise used in locating parking spaces, and reducing the carbon footprint. Other prime applications include streetlights and outdoor parking-lot lights. In both environments, lighting is on at full brightness from dusk until dawn, regardless of whether auto or pedestrian traffic exists. Sensor-based lighting controls can dim streetlights by 50% after 2:00AM, and using integrated long-distance proximity detection can automatically turn on to full power when the system detects incoming traffic. Additionally, offices and high rises often have lighting at full brightness even when no one is around. Control systems can dim or turn off these lights until they detect activity, or at a certain time, say 8:00PM. 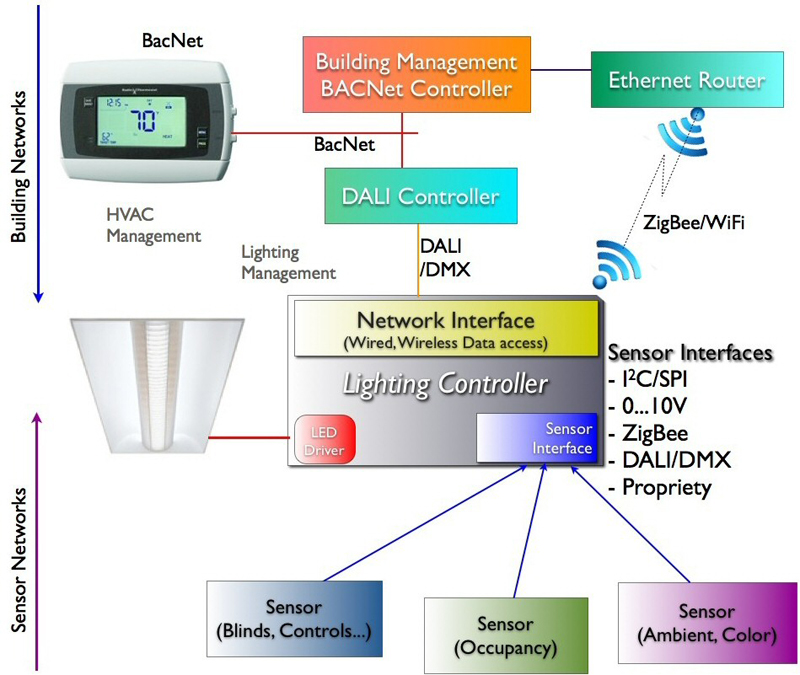 Commercial lighting architecture for building connected lighting With a keen eye on efficiency, commercial lighting will need to look at new digital architectures that will enable new services and reduce cost (Figure 3). Autonomous controls and sensors will reduce maintenance costs and enable significant energy savings, which will justify the cost of replacing outdated legacy lighting systems. LED lighting offers long-lasting performance (30 to 50 khrs) versus fluorescent lighting (10 to 25 khrs) and halogen incandescent lamps (5 to 11 khrs). For some users, fluorescent light has gained a less-than-desirable overall reputation stemming from its subtle flickering at the AC line frequency and its limited spectrum. Although modern fluorescent lamps are efficient, adding the components that enable dimming can be costly, and the nature of their ballast systems does not lend fluorescent lighting to the fast on-off cycle times necessary for motion- or proximity-sensor based control scenarios. In addition to LED lighting's longer life, such sources produce a more pleasing spectrum with no flicker and are readily dimmable. Strategies for automating energy saving in commercial lighting environments may include implementation of such features as occupancy or proximity detection to determine when people have left a room, timer controls, and daylight adaptation through ALS (ambient light sensing). Control systems may use the information obtained through sensing to control lights in several ways: Dimming: Works best with LED lights. Using standard feedback loops and control mechanisms, the lighting controller can reduce the light output of the luminaire when full output is unnecessary, eliminating the energy waste of over lighting. Selective Light Switching: In large rooms, patterns such as turning on every second or third light can create increments of light output, dimming in fixed steps. Autonomous Light Controls: Today's network-connected technology with low-cost and low-power wireless networking (such as ZigBee, WiFi), or wired networks (DALI, DMX, 0-10 V), can organize lights with the most efficient lighting plan for individual locations, with centralized control systems for policy and demand-response management. Designers of commercial luminaires and lighting systems face pressure from both new government regulations and customer self-interest to make ever-greener products offering higher energy efficiency. Building-connected lighting enables not only HVAC energy management but also lighting management, facilitating enterprise-wide total energy management. Building systems can optimize their energy consumption based on temperature and lighting in every room of a commercial enterprise, automatically considering occupancy and available daylight in all locations. www.ams.com References: 1. Source: Strategies Unlimited 2011