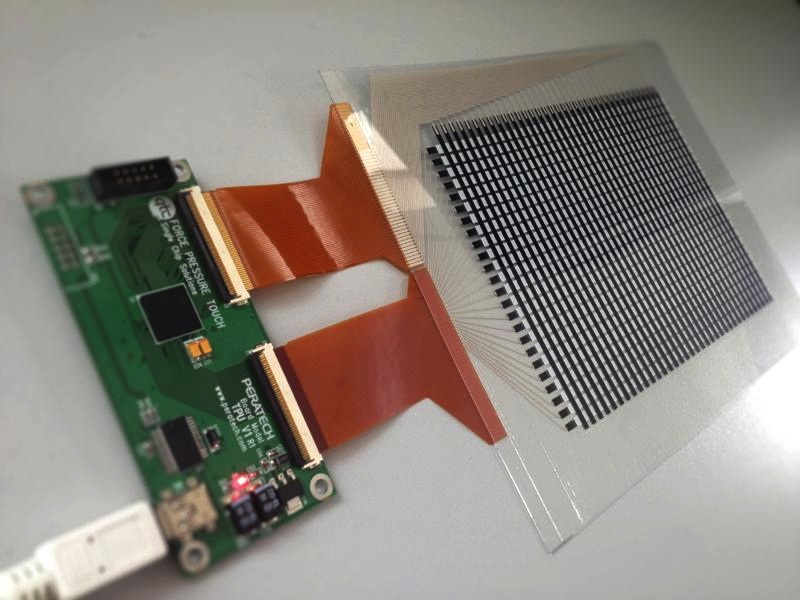 Peratech, innovators in touch technology, has used its recently-launched QTC™ Ultra Sensor to create a touch screen solution for OLED displays for phones, monitors and large interactive displays. The QTC Ultra Sensor is so sensitive that it can be placed behind the OLED display and still detect finger touches on the front of the display to create a touch screen interface. By positioning the touch screen sensor behind the display, there is no loss of light from the display enabling the battery life to be longer. This new QTC Ultra Touch Screen technology follows on from Peratech's QTC Clear touch screen solution that was launched in 2011. "Customers love our QTC Clear touch screen," explained David Lussey, Peratech' CTO. "The slight light loss from having this layer is on a par with existing Resistive and Capacitive touchscreen technologies but, by putting the sensor behind the display, there is no light loss at all. Currently, sensors go over the display and absorb light which has to be compensated for with a brighter setting for the display and that uses up more battery life. It works best with OLED and e-paper type displays, which are becoming increasingly popular, although it can be used with other display technologies providing they can be pressed so LCDs are not advisable." QTC Ultra Touch Screen technology uses Peratech's award winning QTC™ technology. Quantum Tunnelling Composite material is anisotropic and changes its resistance when pressure is applied and only at the point where pressure is applied. This enabling it to be used to make accurate, multi-touch location sensors that can respond to the lightest of touches for the familiar range of touch screen gesture inputs such as squeeze, stretch, flick, etc. A deflection of a micron or so is needed for QTC Ultra to sense the touch through the layers of glass and display. This means that Peratech's solution provides not only multi-touch x and y co-ordinates but also z according to the amount of pressure applied enabling new gesture inputs to be created. Other benefits include longer battery life as power is only used when touched unlike Capacitive, which needs to continually power the active sensing matrix. Capacitive technology also becomes increasingly expensive as the display size increases due to the design challenges of the matrix creating interference, but QTC Ultra Touch Screens can be made using standard ink printing techniques to any size and Peratech has already made examples that are 2m by 1m. The layer of QTC material is printed as a QTC ink on the back of the display as required by the product designer. QTC material has nano-sized particles of conductive material evenly distributed in a non-conductive polymer. When a force is applied the particles move close enough for electrons to flow between the particles using an effect called Quantum Tunnelling. Peratech