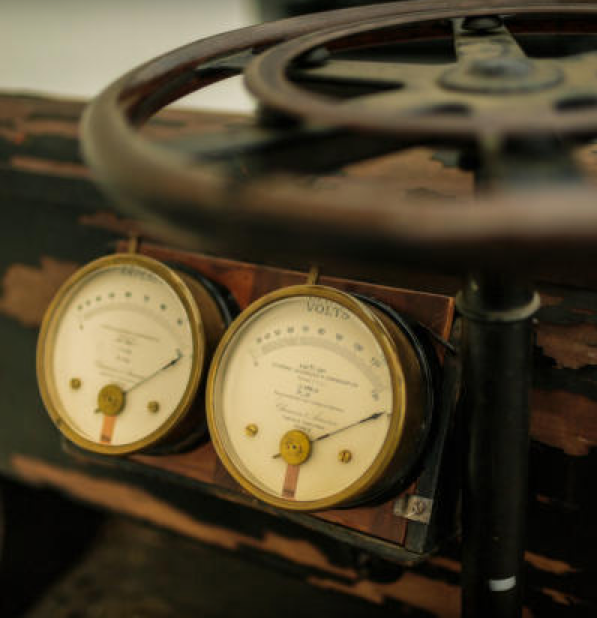 The dashboard from the Porsche-designed Egger-Lohner C.2 electric vehicle

The history of the Stuttgart-based sportscar manufacturer Porsche begins in 1948 with the “Type 356”, the first sportscar to bear the Porsche name, but the history behind the Porsche brand goes back much further in time. Ferdinand Porsche, a pioneer in the field of automotive construction, began working on the construction of motor vehicles as early as the end of the 19th century. As the chief designer at leading manufacturers Lohner, Austro-Daimler, Daimler-Benz and Steyr, Ferdinand Porsche was able to draw on over 30 years of experience in the automotive industry when he founded his own company in Stuttgart in 1931.

The collection belonging to the Porsche Museum in Stuttgart-Zuffenhausen is now able to boast a very special relict from the early years of Ferdinand Porsche's business venture: The original and unrestored “Egger-Lohner electric vehicle, C.2 Phaeton model”-known as the “P1” for short-from 1898. Although at first glance it may resemble an old horse-drawn carriage, this model actually represents the world’s very first Porsche. Constructed and built by Ferdinand Porsche himself. Parked in a warehouse in 1902 and since left untouched, this Porsche electric vehicle is a technological and historical sensation. As the centrepiece of the permanent exhibition at the Porsche Museum, the “P1” is able to bridge the gap between the past and present. The “P1” is also set to influence the future of the Porsche brand too - after all, this first construction by Ferdinand Porsche is not only a legacy for the Stuttgart-based sportscar manufacturer, but also provides the perfect stimulus for future, innovative vehicle concepts such as the new 918 Spyder.

The automotive pioneer Ferdinand Porsche
Ferdinand Porsche was born on September 3, 1875, in the North Bohemian district of Maffersdorf, now known as Vratislavice. As the third child of master tinsmith Anton Porsche and wife Anna, tradition dictated that Ferdinand Porsche was to follow in the footsteps of his father to become a craftsman. However, his true interest was in the field of electricity. In 1893, he went to Vienna to start work as an apprentice at electrical engineering firm “Béla Egger & Co.” (known from 1896 onwards as “Vereinigte Elektrizitäts-AG”). 18-year-old Ferdinand Porsche quickly made a name for himself in the testing department due to his extraordinary talents and strong work ethic. He expanded his theoretical knowledge by observing lectures at the technical University, and then immediately put this knowledge into practice. Ferdinand Porsche quickly carved out a career for himself through his ambition and determination to succeed. In just four years, he rose up the ranks to become head of the “Testing department” and the first assistant in the calculations office. It was in this position that Ferdinand Porsche came into contact with Viennese carriage manufacturer Ludwig Lohner, who dreamt of having his own electric vehicle.

The owner of “K.K. Hofwagenfabrik Jacob Lohner & Comp.” had a wide range of interests, and in the face of declining sales of his luxurious carriages had come to the logical conclusion that the age of the horse and carriage was coming to an end. During his travels in Europe and America, Lohner had developed a talent for predicting the social changes of his time, and wanted to combat these changes in an innovative way through new business fields. He came to the decision that he needed to start manufacturing petrol and electric vehicles. Lohner expected electric vehicles in particular to sell well, as the minimal disruption from noise and exhaust fumes would mean a higher level of acceptance from the general public. The electrical equipment for the vehicles was ordered from “Vereinigten Elektrizitäts-AG”, while the chassis and body were manufactured by Lohner's own company in Porzellangasse in Vienna and at the production site in Floridsdorf respectively.

The “Egger-Lohner C.2 electric vehicle”
The first Lohner electric vehicle developed with the help of Ferdinand Porsche was presented in 1898 at an exhibition for the newly founded “Austrian Automobile Club”. With an electric motor installed transversely between the front wheels and steered rear wheels, this electric vehicle was still far from being ready for series production. The vehicle concept was discarded and other test vehicles were built - this time in line with the ideas developed by young Ferdinand Porsche, who favoured front wheel stub axle steering and the electric motor at the rear of a Lohner carriage. The result of Ferdinand Porsche's vision, the “Egger-Lohner C.2 electric vehicle”, rolled onto the streets of Vienna for the first time on June 26, 1898, and Ferdinand Porsche made sure that he would take credit for the vehicle's design in a most unusual manner: He engraved the code “P1” (P for Porsche, number 1) onto all of the key components, thus giving the vehicle its unofficial name.

The sheer volume of ideas realised within this vehicle is still something to be admired today: For the vehicle’s drive, Ferdinand Porsche used one of his own inventions, the “octagon” electric motor, which took its name from the eight-sided design of the motor housing. Shock absorbers were used to protect the electric motor, which was suspended so that it oscillated around the vehicle axle. The highly compact drive, weighing just 130 kg, offered an output of 3 hp at 350 rpm. For short periods, up to 5 hp could be achieved in overloading mode, allowing the vehicle to reach up to 35 km/h. To transfer the power, Ferdinand Porsche used a single-speed differential gear (with a transmission ratio of 1:6.5) operated using a system of gear rings on internally toothed wheel hubs. The vehicle speed was regulated via a 12-speed controller, which offered six forward gears, two reverse gears and four braking gears. To enable this set-up, Ferdinand Porsche coupled the commutators of the electric motor both consecutively and in parallel. In addition, the electrical resistance in the electrical circuit could be changed and individual accumulator cells could be connected and disconnected. Thanks to the 500-kg “Tudor” batteries, the overall range of the vehicle could reach up to 80 kilometres, or 3-6 operating hours. The 1350-kg vehicle was braked using two different brake systems: Alongside a mechanical band brake, the driver could activate an electrical brake by pressing the steering wheel rim to interrupt the current flow. Another innovation was the Lohner alternating vehicle body with a closed Coupé-style design and an open Phaeton design, which allowed the vehicle to be used both in summer and winter.

The first Porsche race victory
Its first practical test awaited the “P1” in September 1899 at the international motor vehicle exhibition in the German capital of Berlin. At the time, the competition to produce the best drive systems was fierce, and the 120 exhibitors included no less than 19 electric vehicle manufacturers competing against a considerably higher number of petrol vehicles. To demonstrate to the public the performance and efficiency of the electric vehicles, a race for electric vehicles with a prize for the winner was announced for September 28. The race covered a distance of 40 kilometres, taking the drivers from Berlin to Zehlendorf and back. The route demanded a great amount of skill from the participants, who had to tackle challenges such as gradients, an 8.6-km high-speed section and a 7.8-km efficiency test. This first automotive race marked a great victory for Ferdinand Porsche, who took the gold medal with his “P1”. With three passengers on board, Porsche steered his electric vehicle across the finish line 18 minutes ahead of the next competitor. More than half the participants failed to reach the finish line due to technical difficulties, while others were not assessed because they had failed to meet the specified minimum speed. Ferdinand Porsche also came out on top in the efficiency test, as his “P1” recorded the lowest energy consumption in urban traffic.

The Lohner-Porsche vehicle
For Ferdinand Porsche, the “P1” was only the start of his career as a vehicle designer. In November 1899, he became the chief designer for the Lohner sites, where he was able to bring his next big idea to life: the electric wheel-hub motor. By 1900, an electric vehicle driven by steered wheel-hub motors known as the “Lohner-Porsche” was causing a stir at the Paris Exposition Universelle. There, Ferdinand Porsche demonstrated the true extent of his innovative energy in an even more impressive fashion: A sportscar fitted with four electric wheel-hub motors was showcased as the first all-wheel drive passenger vehicle in the world, and stole the show with its four-wheel brake system. Ferdinand Porsche's next idea was just as pioneering: In 1900, the same year as the Paris Exposition Universelle, Porsche combined his battery-powered wheel-hub drive with a petrol engine - and the idea behind the serial hybrid drive was born. Known as the “Lohner-Porsche Mixte”, these vehicles went into series production in 1902.

The “P1” in the Porsche Museum
Five years since it opened in January 2009, the Porsche Museum has decided to update its permanent exhibition. In addition to reorganising the “Product history” section as well as the individual thematic displays, the Porsche museum has added numerous new highlights to its exhibition. Located in the first section of the museum-the “prologue”-the “P1” now serves as the starting point of the exhibition. An extensive animated film explains the technological innovations embodied by the electric vehicle. A new film describes the work of Professor Ferdinand Porsche, covering everything up to the construction of the first Porsche sportscar in 1948. The previous opening exhibit, the aluminium body of the Type 64 “Berlin-Rome car”, now takes its place in the correct chronological order and is featured in the “Porsche before 1948” section.

Further changes have also been made in the “Motorsport” section, which is now divided according to the eras of the various vehicle concepts, rather than primarily by racing events. For example, the racing vehicles from the time of the Type 356 or the era of the first GfK race vehicles in the 1960s are now presented together. In the “Product history” section, fans of the transaxle sportscar can enjoy new additions to the museum relating to the 924 to 928 model lines.