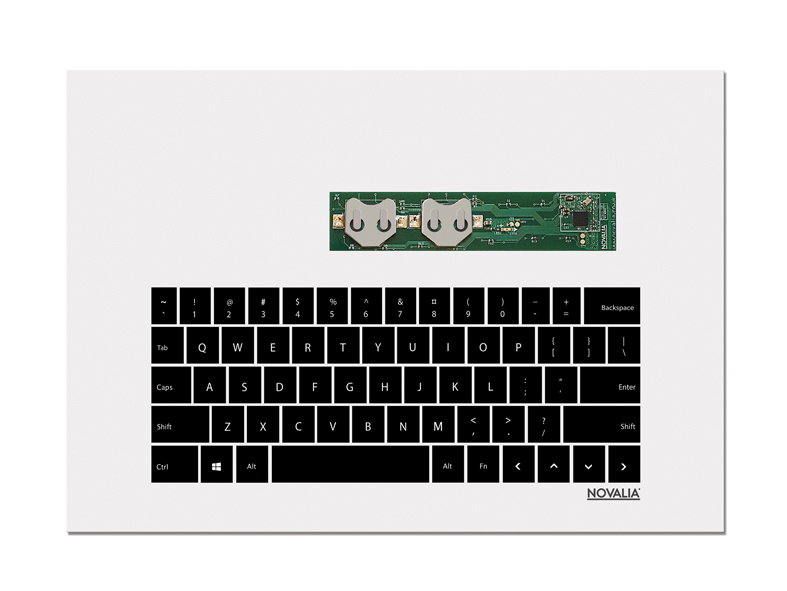 A demo application of the technology to be displayed at the International Consumer Electronics Show (CES) at Las Vegas in January comprises a fully-functioning QWERTY keyboard printed with conductive ink on a regular sheet of U.K. A4-sized photo paper (11.7 x 8.3-inch) that weighs just 30g (not including batteries). A 4.7 x 1.0-inch(120 x 25mm) control module with battery (2 x CR2016 watch batteries) and electronics housing is just 0.08-inches (2mm) deep, while the keyboard area, according to Novalia, can be as thin as 50-microns (0.005mm). Novalia says that this is about 10x thinner than any other keyboard ever produced and can be printed at 100 meters-per-minute on a standard print press.

In operation, the QWERTY keyboard keys are printed on a regular sheet of 70gsm A4-sized paper layered upon a 20x8, X-Y touch matrix substrate printed on the photo paper that can be re-configured in software to represent any language or indeed other user or developer-assigned functionality. The Nordic Semiconductor nRF51822's on-board 32-bit ARM Cortex M0 based processor manages the capacitive touch side of the application, while the SoC's class-leading ultra low power performance supports a battery life of up to 18-months (9-months for a single CR2032).

A simpler version of this keyboard has already been developed by Novalia. Called 'Switchboard', it comprises eight capacitive touch buttons printed onto an ultra light-weight (28g including a single CR2032 battery) piece of U.K. A5-sized printed paper mounted on foam card that can be configured to control (or be controlled by) apps running on any Bluetooth v4.0 enabled iOS device.

A free demo app from Novalia used in conjunction with the Switchboard, as an illustrative example, can conduct an 8-piece Jazz or Latin music band (audio being replayed through a smartphone or tablet), control iTunes (play, pause, skip, +/- volume), fetch up-to eight specific tracks from an iTunes playlist, and even send Tweets.

Another popular early demo developed by Novalia is a U.K. A2 paper-sized (23.4 x 16.5-inch) drum poster comprising a printed image of drum kit that allows users to play the drums either standalone or wirelessly through a Bluetooth v4.0 enabled iPhone or iPad by simply touching the individual drum or cymbal pictured. The demo led U.S. magazine Adweek to ask: "Is this musical poster with interactive paper the future of print and outdoor ads?"

"All of the above demos can be achieved with an electronics control module as thin as 2mm in thickness and support an X-Y printed touch-pad as thin as 50-microns," explains Novalia CEO, Dr. Kate Stone. "The really clever bit, however, is being able to literally print touch sensors, with no metallic wiring, using local existing print processes anywhere in the world, and so at very low cost. And the functionality of all of these devices is defined in software and so could be shipped digitally."

Stone continues: "In particular I would love to see this technology being used to make everyday physical objects we all know and love, such as books and traditional music packaging, that have recently been in terminal commercial decline, perhaps being updated and possibly even made relevant again.

"And low cost keyboards made of paper could also form part of charitable and NGO initiatives to enable even the poorest people in the developing world to access modern technology for the first time. The possibilities are endless."

Developers Kit are available from Novalia which is actively inviting and partnering with interested companies to begin developing ground-breaking applications based on its patented technology.

"The application potential of this technology is mind-boggling and if successful could possibly form the basis of a number of brand new market and product categories that simply did not and could not exist before now," comments GeirLangeland, Nordic Semiconductor's Director of Sales & Marketing. "I commend Novalia for the sheer level of innovation and ingenuity being demonstrated here and take pride in the fact that this application could not have been achieved without the use of a single Bluetooth low energy Nordic Semiconductor nRF51822 with the technical capabilities to handle both the wireless connectivity and the application control simultaneously.

"And right now, as has been the case for the past six months, there is no other Bluetooth low energy single chip solution in the world that can do that because none include an embedded ARM processor."