Putting the power in power-dressing 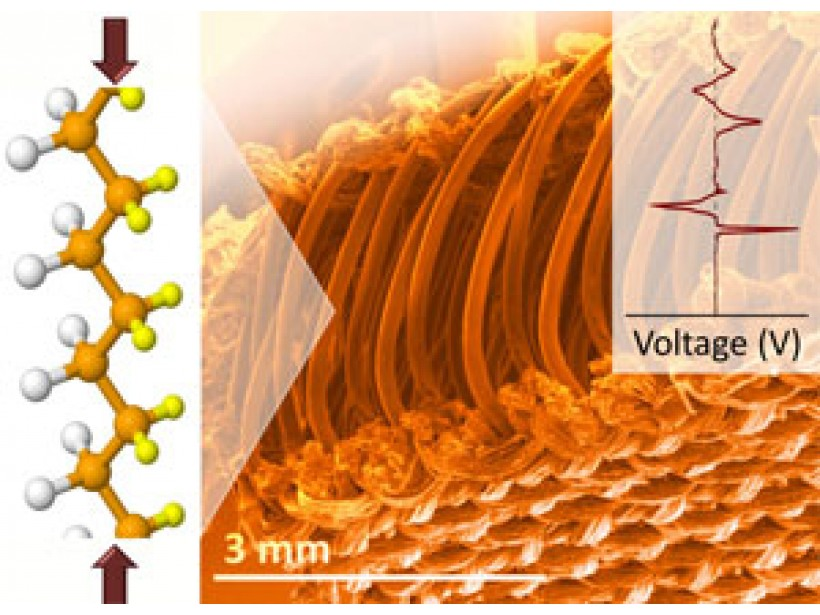 Scientists in the UK developing wearable electronics have knitted a flexible fabric that delivers twice the power output of current energy harvesting textiles.

There is considerable interest and research into wearable piezoelectric energy harvesters that use waste energy from human movement or the ambient environment to power low-energy consuming wearable devices, such as wireless sensors and consumer electronics. Typically these materials are ceramic-based with limited flexibility, so aren't that comfortable to wear, and include toxic elements like lead. They also involve charge-collecting metallic electrodes with poor fatigue resistance that fail after repeated use. New, less rigid materials with sufficient mechanical strength and an all-in-one design are therefore highly sought after.

The polymeric piezoelectric fibres created by Navneet Soin at the University of Bolton and colleagues in the laboratory of Elias Siores fulfill all of the above: they are flexible, strong and breathable.

The fibres can be knitted together to from a 3D fabric composed of two separate conducting, silver-coated polyamide textile faces (the electrodes) joined together by a poly(vinylidene fluoride) (PVDF) spacer yarn (the piezoelectric component). Compression of the fabric causes the spacer yarn to generate a charge that is collected by the two metallic faces. The melt spinning process used to generate the fibres is much faster than traditional electrospinning and a higher throughput can therefore be achieved.

Seungbum Hong, a materials scientist at Argonne National Laboratory in the US, anticipates the design of wearable electronic systems embedded with these piezoelectric energy harvesters in the near future. He identifies that a challenge remains to fully characterise the lifetime of the harvesters at various temperatures in an accelerated way and says that "the stability of the device when immersed in water will need to be addressed to implement the harvesters into wearable products."

Currently 1-5μW/cm2 of power can be generated, enough to power a small sensor. However, the team is confident that optimisation will help enhance the power output. They see scope for applications including sensors for assisted living, non-invasive health monitoring and charging of portable electronic devices.