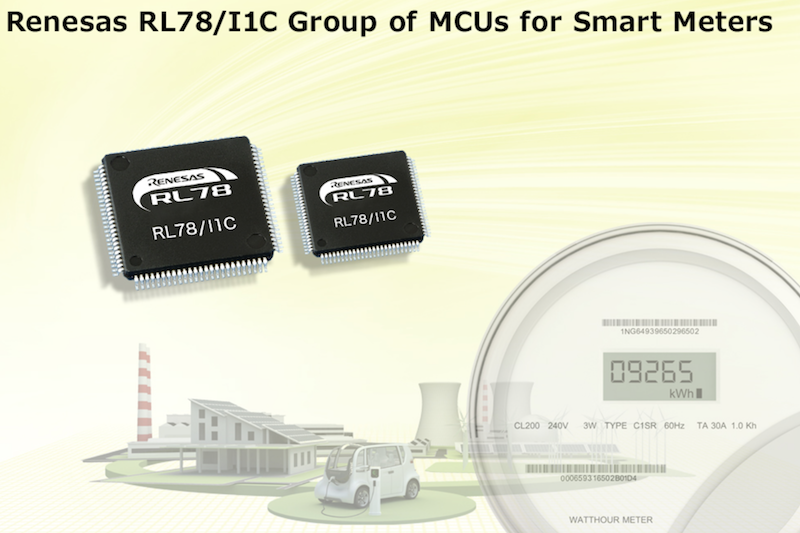 Renesas Electronics Europe, a premier supplier of advanced semiconductor solutions, announced the availability of its new microcontrollers (MCUs) for the power meter market, particularly targeting the smart meters. The new RL78/I1C Group of MCUs is designed for the international standard DLMS with enhanced security function and improved arithmetic operation. The RL78/I1C Group of MCUs also retains the measurement accuracy and low power consumption of its predecessor, the RL78/I1B Group, of which more than 30 million units have been shipped over a period of three years.

Key features of the RL78/I1C Group of MCUs:

1) Ability to implement electric power measurement processing and DLMS processing on a single chip
The RL78/I1C integrates an AES hardware engine for this purpose. In particular, the RL78/I1C is the power meter field industry’s first to implement in hardware the AES GCM mode required by the DLMS standard, thereby delivers a speed boost of 20 times or more compared with encryption and decryption using software processing on existing Renesas MCUs. In addition, the on-chip phase-locked loop (PLL) boosts the maximum operating frequency from 24 megahertz (MHz) to 32 MHz, and the 32-bit multiplier/multiply-and-accumulate unit dramatically reduces the load imposed by software power calculation with 24-bit data converted by the 24-bit ΔΣs A/D converter, resulting in an approximate 30-percent increase in arithmetic operation capacity. This means that a single chip can handle both electric power measurement processing and DLMS processing.

In addition, Renesas has extended the features and functionality of the existing RL78/I1B to the new MCUs, along with improvements to the real-time clock that achieves a standby mode current consumption of 0.7μA (Typ.) during operation with independent power supply and power monitoring function with battery backup function that enable the CPU and peripheral functions to continue operating even when a power outage occurs.

3) Evaluation and reference kit
By using the evaluation kit in the initial study phase, it is possible to start evaluating performance characteristics of the RL78/I1C without actually writing programs. The reference kit, which includes hardware and drivers for measurement functions as well as a highly reliable DLMS library, can be used in the meter development phase to reduce the time required for development by approximately 25 percent, compared with independent development, and also to reduce costs.

Availability
Samples of the RL78/I1C are available now. Pricing varies depending on the memory capacity, package and number of pins. Mass production is scheduled to begin in August 2016 and is expected to reach a volume of 200,000 units per month by September 2017. (Availability is subject to change without notice.)

Renesas continues to develop highly reliable solutions such as the RL78/I1C MCUs to encourage the expansion of measurement and secure communication capabilities in the power meter field and contribute to the widespread adoption of smart meters.

The European launch of the RL78/I1C will take place at the European Utility Week from November 15th to 17th 2016 in Barcelona. Renesas will be showcasing its next-generation solutions for metering and communication technologies on Stand 3G141.