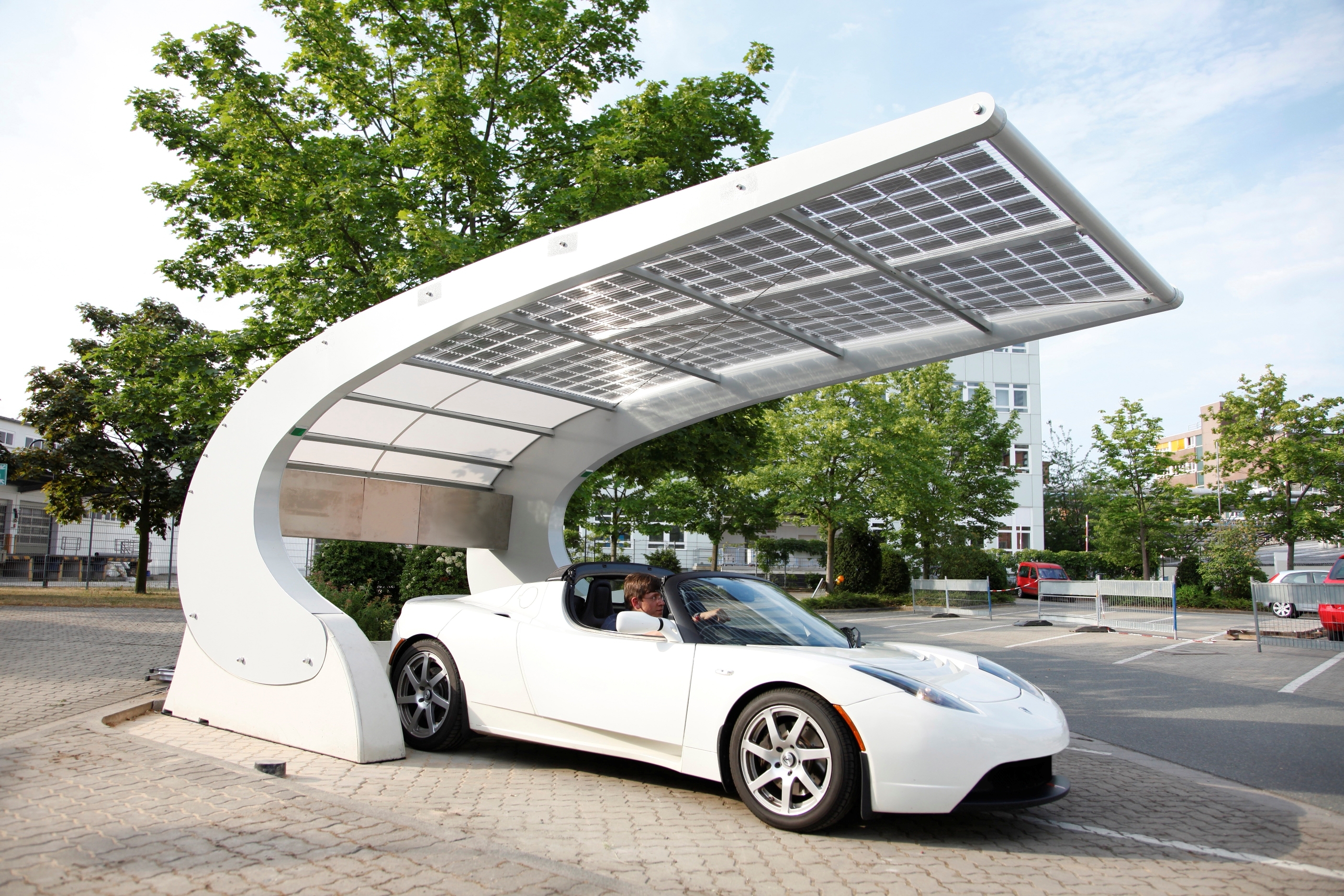 A new solar carport transforms the parking space into a provider of green power that should delight designers and owners of electric cars alike. Fitted with innovative lightweight solar modules featuring PLEXIGLAS® from Evonik, it will now be mass produced by the manufacturer, MAGE SUNOVATION GmbH. While useful, carports tend to be less than spectacular from an architectural perspective. A flat roof supported by four columns protects the car parked below from the sun, rain, snow, and hail. However, it does not need to be a design wasteland, as the Sunovation Eco Technics shows. The new photovoltaic design carport developed by Mage Sunovation GmbH uses PLEXIGLAS® from Evonik as carrier sheet for the solar cells a material with which the solar modules can be formed exactly as required. Futuristic in design, the carport has everything one would expect of a high-tech parking space: solar modules for power generation, energy-conserving high-performance LEDs, motion detectors that switch on the lighting, and a power socket for charging an electric vehicle. 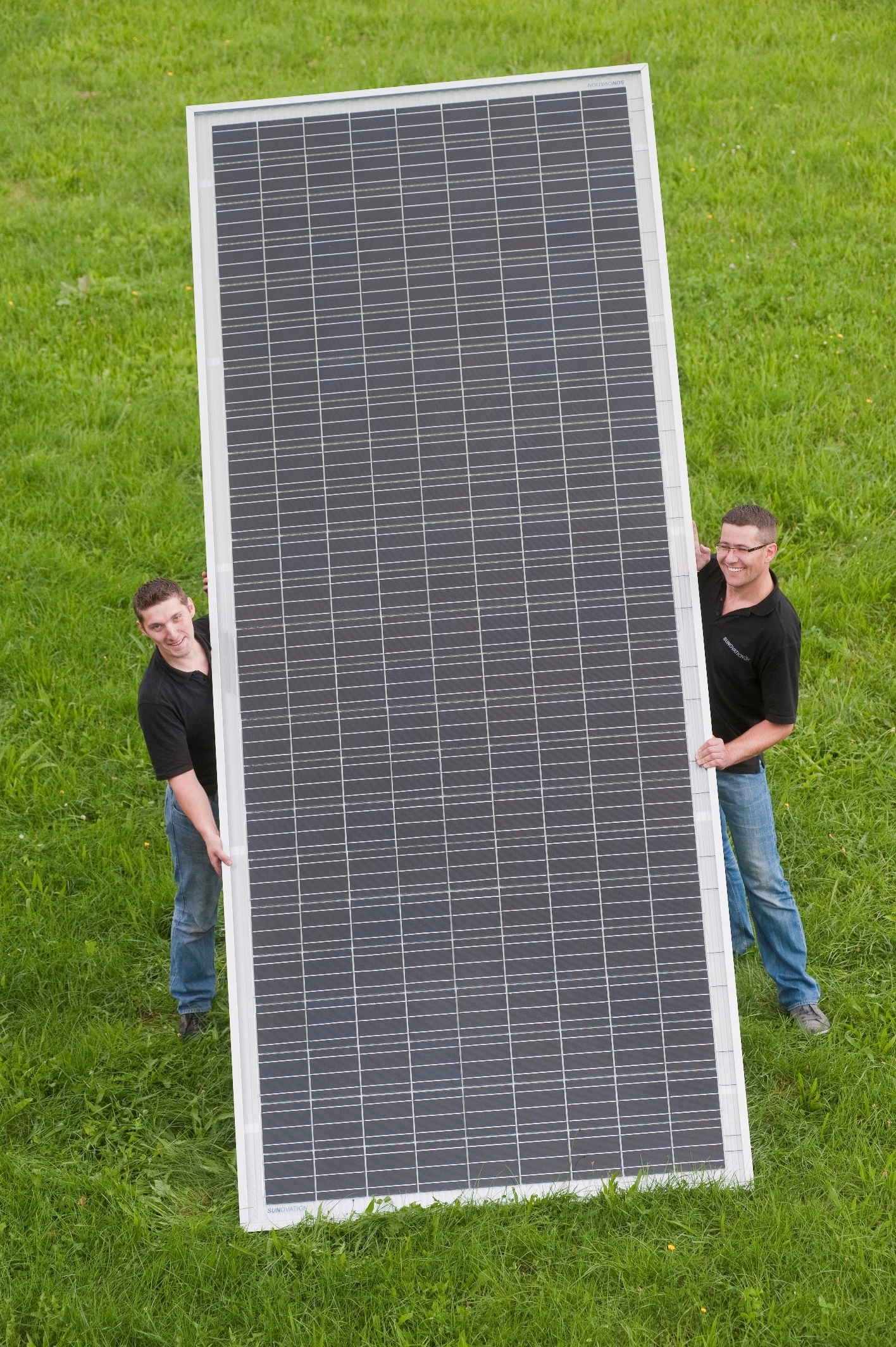 A carport designed for Evonik was recently installed on the premises of the Darmstadt site directly in front of the new lightweight design studio in which Evonik presents sophisticated plastic components for applications in the automotive industry, aviation, solar technology, and architecture. An appropriate environment for the solar carport, which rises upwards in an elegant arch. Its eight-square-meter photovoltaic surface allows enough power to be produced "to cover the consumption needs of an electric vehicle driving about 40 kilometers a day," explains Markus Krall, founder and shareholder of Mage Sunovation GmbH. The solar cells can generate around one 1 kWp (kilowatt peak) of electricity. Lightweight solar module permits filigree design The carport's filigree design is made possible by a lightweight plastic solar module. The solar cells are embedded between two PLEXIGLAS® sheets. While the cover sheet is made of solid material, a lighter multi-skin sheet that delivers additional weight savings was chosen for the lower carrier sheet. A special multi-component gel between the two layers holds the cells in place. The low weight of the lightweight solar module, which weighs around 60 percent less than a comparable glass-on-glass module, makes an elaborate substructure unnecessary and provides numerous design options ranging from different colors to a satin underside. For the model in Darmstadt the designers opted for backlighting of the modules with PLEXIGLAS® LED rods. When the rods are illuminated by the LEDs at both ends, they spread the light evenly throughout the entire rod. The LEDs can be switched on by motion detectors. By contrast, weather resistance, mechanical properties and transmission are the main features of the cover sheet. "PLEXIGLAS® I ideal for this", says Uwe Löffler, who is responsible for establishing new business in the Solar market segment in Evonik's Acrylic Polymers Business Line. "Not only does it have the highest transmission among transparent plastics, but it is also highly UV and weather resistant." In the carport in Darmstadt, the cover sheet is made of the newly developed PLEXIGLAS® Solar, whose transmission properties are especially adjusted to the spectral response of solar cells. This material allows high-energy radiation of between 350 and 380 nanometers to pass through far better than other plastics. Consequently, more high-energy light reaches the solar cells and can be converted into electricity. Sophisticated technology Even though the Sunovation Eco Technics carport is still in its infancy, it comes with sophisticated technology. "We have been successfully developing lightweight solar modules for around 13 years and have built up a wealth of experience," says Krall. A host of applications fitted with solar technology bus stops, golf carts, and solar portholes for boats, catamarans, radio towers, and even one of the world's largest lightweight solar modules measuring around 1.6 meters by 4 meters, which Evonik presented at last year's Plastics Trade Show in Dusseldorf testify to the company's success. Slated for mass production There is every reason to believe that the carport can become a success. Its modular construction makes it easily expandable for large-scale applications, and installing it is incredibly simple - it can be set up on any even, stable substrate without a foundation and, in most cases, without a construction permit. The manufacturer will even take back used solar-modules and recycle them. www.plexiglas.de www.plexiglas.de