IONITY, a joint venture between Daimler, Ford, BMW Group and the Volkswagen Group with Porsche AG, has unveiled its next generation charger. 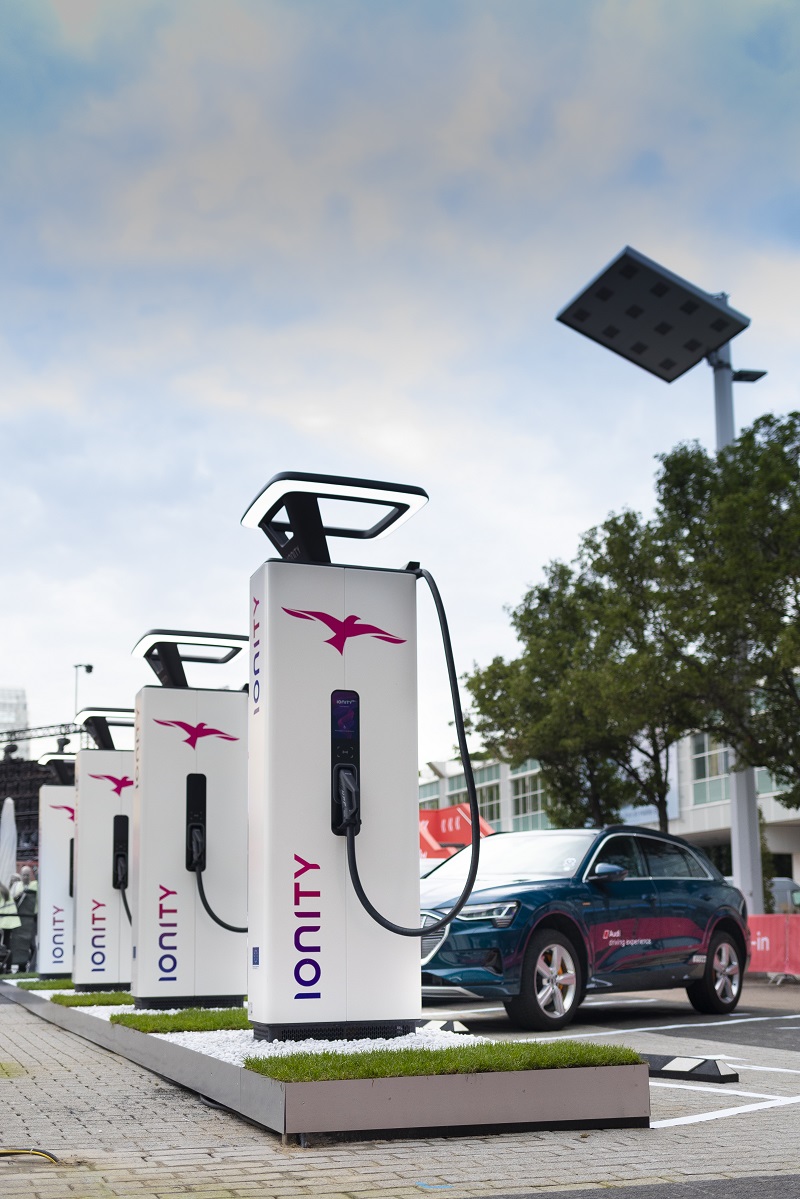 The unique design – unveiled at the IAA 2019 Motor Show in Frankfurt – features a distinctive Halo atop the charger unit which will change the face of highways and charging areas across the continent. The luminating LED Halo emits enough light to remove the need for additional lighting around the charge site, while also providing a secure, welcoming experience for the recharging driver. Sitting atop a 2.6 metre (over 8.5 feet) tall unit, the charger will act as a beacon for drivers along highways across Europe.

The first site for the new charger is slated for Greve, Denmark, with the subsequent rollout of the Halo chargers to expand across Scandinavia, particularly in Norway.

“We chose to work with Tritium because of its engineering expertise and its ability to closely mirror our initial concept as much as possible, with the fewest compromises to the design and the ability to quickly turn around the project.”

The path to industrialising a revolutionary concept

The charger – conceived by IONITY and its partner Designworks – is the result of 18 months of research, engineering and testing from Tritium and a significant co-operative effort between the companies to keep to the original design as much as possible.

“The concept of the chargers was revolutionary from the outset, and with this comes the challenge to industrialise the concept in full,” said David Finn, CEO and co-founder, Tritium. “With few compromises, and thanks to some equally revolutionary and innovative engineering from our team and our expertise in small-footprint design, we proved to IONITY that we could make their vision possible.”

Tritium’s chargers, from its award-winning Veefil-RT 50kW DC Fast (Rapid) Charger to its Veefil-PK 350kW DCH High Power Chargers, benefit from the company’s leadership in small footprint. This leadership and flexibility ensured that Tritium could marry the design to the sleek, slim concept originally planned for IONITY.

As such, the industrialised charger features a nearly flush front-facing compartment. With no bumps, no exposed screws or pop rivets, the charging point is entirely smooth and demonstrates the incredible level of attention to detail in the charger’s design.

Further, the HMI is a one-of-a-kind single-pane-of-glass concept. It incorporates everything from the interface to elements of the charger plug, and its unique design will remain exclusive to the Halo charger. It offers users a service in seven different languages, making the process of charging a vehicle as simple and stress-free as possible, while customers of mobility service providers (MSPs) can pay directly via their contactless cards or tokens for tap-and-go payments.

“These are true state-of-the-art chargers which will revolutionise the look and feel of highways across the continent,” said Finn. “When people see these bright halos shining in the distance, they’ll know they can soon charge easily and at the fastest rate possible.”

The IONITY next-generation Halo charger launch follows a run of news featuring unique research, development, engineering and expansion across the globe from Tritium.

Earlier this year, the company launched its Tritium E-Mobility Innovation Centres in Brisbane, Australia, and Amsterdam in order to cater for the increased demand in bespoke solutions such as those requested by IONITY.

Recently, the company announced it signed a deal in the United States with SSA Marine to supply the Port of Long Beach in California with 33 modified Veefil-PK 175kW DC HPCs – which will be equipped with a Quick Charging Connector (QCC) from Stäubli – to enable the fast charging of the port’s entire fleet of electric-drive terminal tractors automatically and simultaneously. The project represents the largest automated vehicle charging program at any port in the US.

Last year, the company announced it was receiving a portion of $3.2 million in federal funding awarded to the Electric Power Research Institute (EPRI) by the Department of Energy, to develop an extreme fast-charging system that can connect directly to the distribution grid. The EPRI allocated about US$400,000 for Tritium to develop a custom version of its Veefil-PK high-powered charging head, along with providing input for system design and testing.