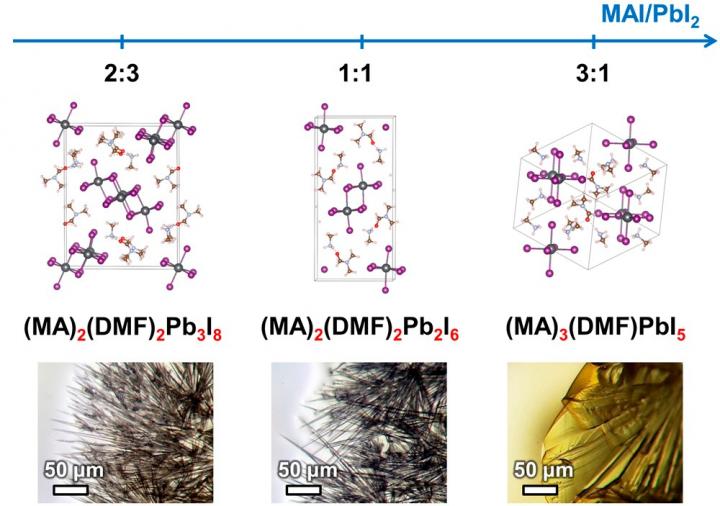 These are crystal structures of crystalline solvates.

Researchers from Department of Material Sciences, Lomonosov MSU, explained how changing the ratio of components forming light-absorbing layer of a perovskite solar cell influences the structure of created films and battery efficiency. The results of the study were published in the Journal of Physical Chemistry C.

Organic-inorganic perovskites are a new class of photoactive (i.e. reacting to light) materials. They were named after the mineral called perovskite (CaTiO3, calcium titanate) because of their structure being similar to, but their own properties are much more interesting. Such materials can be used to create perovskite solar batteries, which were first introduced only five years ago, but have already surpassed in efficiency the more widespread and more expensive silicon solar elements.

The researchers selected and described three intermediate compounds which are crystalline solvates of one of the two solvents used most often in creating perovskite solar batteries. For two of these compounds, their crystal structure was established for the first time.

"We have found out that the the formation of intermediate compounds is one of the key factors that determines functional properties of the final perovskite layer because perovskite crystals inherit the shape of those compounds. This, in turn, influences the film morphology and solar cell efficiency. It is especially important when creating thin perovskite films, because needle-like or filiform shape of crystals will lead to the film being discontinuous, which will significantly lower the efficiency of the solar cell. The knowledge on the influence of the ratio of precursor reagents on the shape of the final perovskite crystals will allow to deliberately choose the conditions for obtaining optimal films, which will result in perovskite cells with high efficiency", - the principal investigator Alexey Tarasov, Ph. D., Head of Laboratory of New Materials for Solar Energetics (Department of Materials Science, Lomonosov Moscow State University), has told us.

Such intermediate compounds are unstable, so the authors used synchrotron radiation and low temperatures to cool the crystals to the temperature of -173 °C. The freezing allowed the scientists to stop the decomposition of the crystals and to run the necessary measurements to become able next to determine the structure of the solvates.

Additionally, the researchers have studied the thermal stability of the obtained compounds and managed to calculate the energy of their formation using quantum-chemical modeling. Knowing the formation energy allows to explain why certain crystals are formed when using different solvents.

The authors have also learned that the ratio of reagents in solution specifically determines which intermediate compound will form in the process of crystallization. Crystal structure of the intermediate compound defines the shape of the perovskite crystals formed, which determines the structure of the light-absorbing layer. This structure, in turn, influences the output of the solar battery created.