Tantalum capacitors with MnO2 cathodes can even be utilized at temperatures as high as 230°C under specific limitations [1, 2]. However, there are two major disadvantages of MnO2-based tantalum capacitors: their relatively high ESR, which is unrealistic for many power applications, and their propensity for thermal runaway failure mode under excessive application beyond manufacturer’s recommendations. These issues can been overcome with the use of conductive polymer as a cathode material; and, in addition, newly developed technologies using dispersed PEDOT are pushing the maximum levels of rated voltages for solid electrolytic tantalum capacitors up to, and even beyond, 125V [3, 4].

Although better than MnO2 cathodes in some respects, conductive polymer electrodes are not entirely without fault. For example, they can exhibit sensitivity to external conditions, such as high humidity and mechanical stresses. These organic compounds can also exhibit degradation at elevated temperatures, especially in the presence of oxygen or humidity [5, 6]. Such changes can include oxidation and morphology alterations, in addition to other degradations, all of which can lead to a reduction in the cathode’s conductivity and result in an increase of ESR and/or a drop in capacitance.

The logical solution for overcoming such limitations and ensuring the high stability and reliability of polymer tantalum capacitors is to use hermetically sealed packaging, which can nullify external environmental influences, and to subject the parts to special ageing and screening processes [3, 7]. Such procedures improve BDV distribution, decrease DCL, and remove maverick capacitors with potentially latent unstable behavior.  As such, when properly sealed and subjected to appropriate testing, hermetically sealed high voltage polymer tantalum capacitors prove fully capable of satisfying the demands of high reliability power applications.

To create the hermetically sealed polymer tantalum capacitors to be tested for use in high power, high reliability applications, porous tantalum pellets were pressed with an embedded tantalum wire, sintered, and then anodized to form an appropriate dielectric layer. Special processes were also applied in order to achieve the best quality amorphous dielectric with minimal defects. Then, a conductive polymer cathode was created on the dielectric with PEDT-PSS dispersion materials using a dipping and drying process. The external cathode layer was then coated with graphite and silver, also via a dipping process. Prepared capacitors were assembled into a special ceramic package [2], dried extensively, and immediately hermetically sealed under an inert atmosphere. Additionally, special ageing and screening mechanisms were applied before long-term performance testing.

Hermetically sealed polymer tantalum capacitors rated at 100μF/35V were tested at 125°C and 35V for 10,000 hours. Capacitance and ESR was measured over time, and the results are plotted in Figures 1 and 2. Only minimal capacitance loss and a slight increase in ESR were observed. Steady-state DCL at rated voltage (35V) and 125°C measured <250nA, which is much lower than the standard 10% of capacitor CV limit applied to traditional, non-hermetic conductive polymer capacitors. 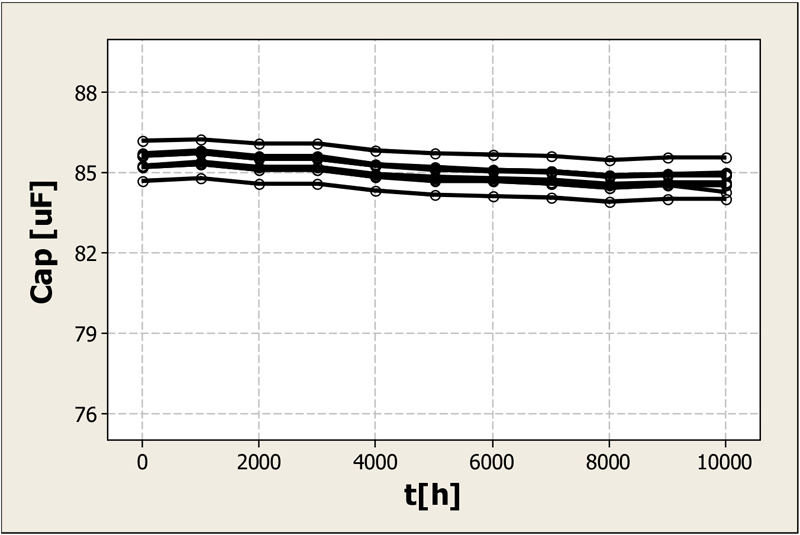 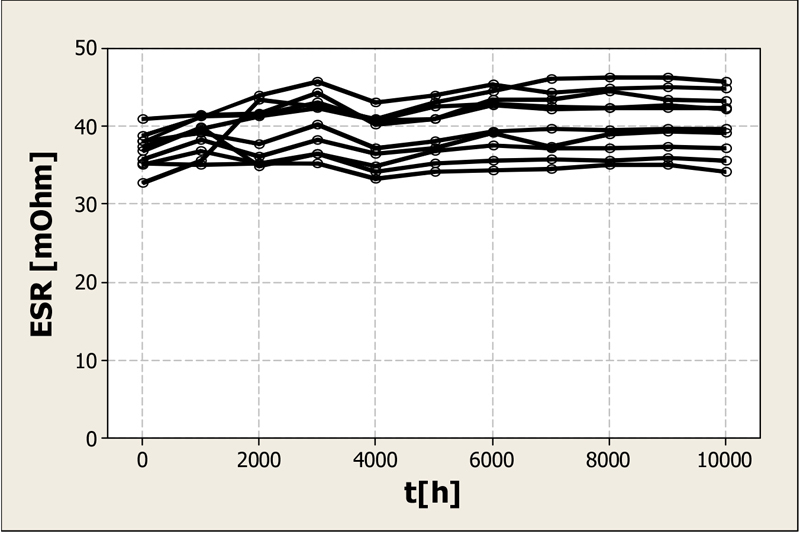 In this instance, the limit should be 10% of 100*35 = 350μA. In fact, the hot steady-state DCL measured in our experiments was still three orders of magnitude below the standard limit of tantalum polymer capacitors using the traditional molded package. So, based on these results, we can conclude that this combination of technologies leads to an extremely stable, low ESR, low leakage capacitor that is ideal for use in high reliability power applications. 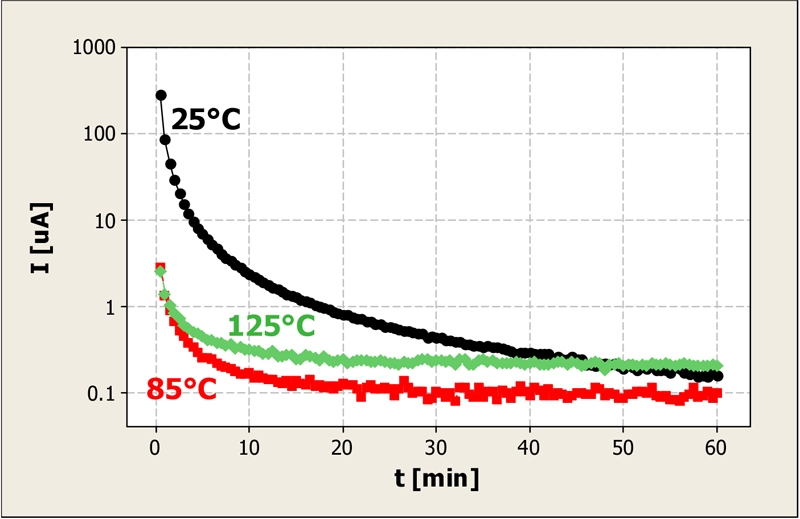 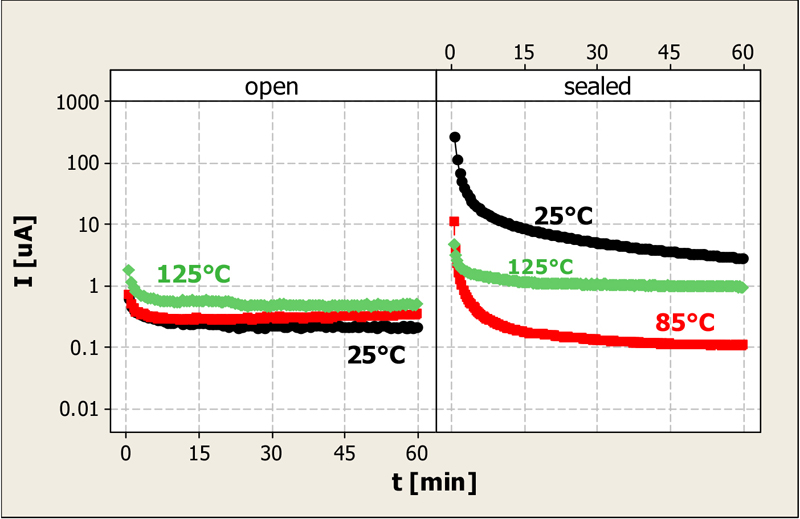 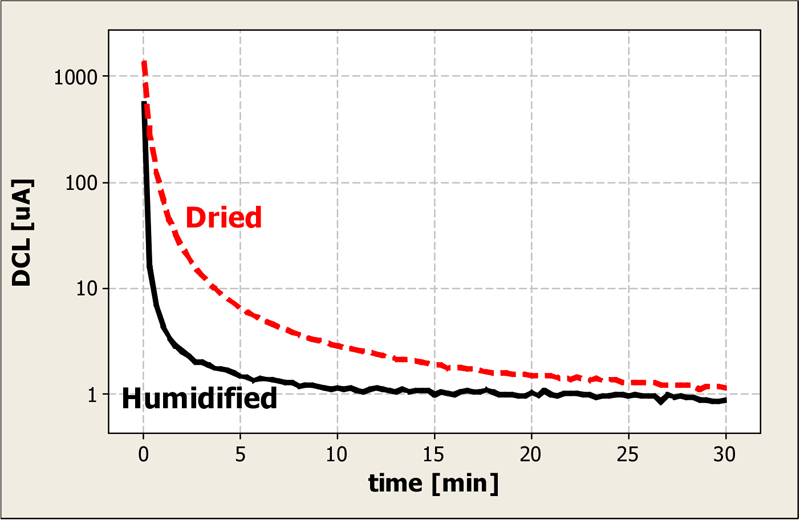 Such behavior suggests that, after a voltage is applied, a certain barrier is created on the surface of the cathode at the boundary with the dielectric. This is linked with ion mobility, as higher temperatures increase ion mobility, and therefore lead to faster DCL decrease. PEDT-PSS is based on two different polymers: a positively charged PEDT cation, which assures the intrinsic conductivity via its highly conjugated electronic structure, and a negatively charged polystyrene sulphonate, which works as counter ion to PEDT.

Each aromatic ring of the polystyrene contains a sulphonic group, SO3H, but only a certain percentage of them are dissociated to SO3 and a compensating PEDT positive charge. There are many sulphonic groups that can be dissociated in the presence of water; consequently, the result is a structure in which relatively large polymeric molecules of polystyrene sulphonic acid will be dissociated and, thus, negatively charged. After voltage is applied, we can assume that the orientation of such negatively charged groups is toward the dielectric, and therefore blocking DCL, and that the kinetics of such structures will be faster at higher temperatures. 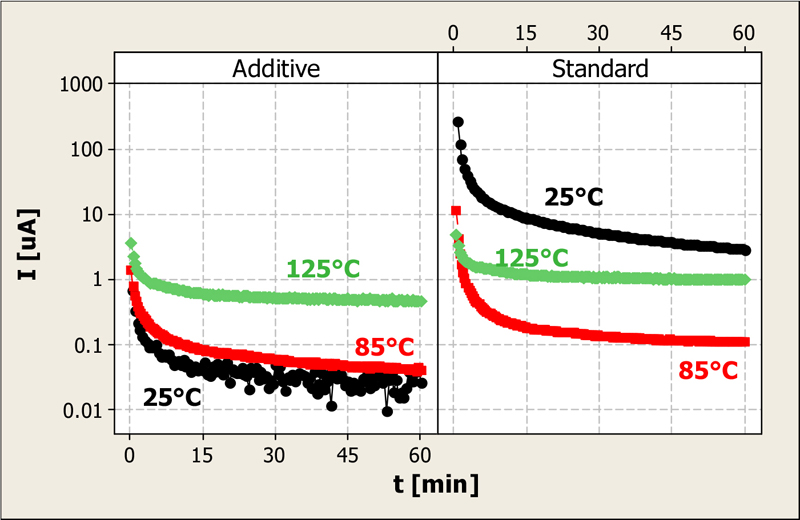 Hermetically sealed tantalum polymer capacitors have been proven to provide stable performance and high reliability during long-term life testing exceeding 10,000 hours, even in elevated temperature and humidity environments. The combination of the best available technologies and materials is enabling long-term stability on high voltage tantalum polymer capacitors that also exhibit extremely low DCL and low ESR performance. The key elements of the new technology are: an optimized anode, pre-polymerized PEDT-PSS cathode material and additives, a hermetically sealed package, and the use of special ageing and screening processes.

Extremely low DCL levels measured at steady state are enabling a new class of conductive polymer capacitor. The phenomenon of slow DCL decrease can be explained by the need for water content in the PEDT-PSS material, which helps to establish an additional barrier at the interface between the dielectric and conductive polymer. This barrier is likely caused by an interaction between water and the sulphonic groups of PSS, and initial results show that alternative compounds (such as PEG) can lead to even faster DCL decrease and even lower DCL specification in next-generation capacitor technology.

Many of the attributes yielded by these studies are currently available in AVX’s TCH Series hermetically sealed tantalum polymer chip capacitors, which are ideal for aerospace, avionics, and defense applications, as well as for automotive applications, in which ever-higher reliability and safety specifications are paramount (see Figure 7).   Consequently, surface mount hermetically sealed tantalum polymer capacitors are expected to lead the way in extreme long lifetime, low ESR applications, especially as lifetime and voltage ratings continue to increase. 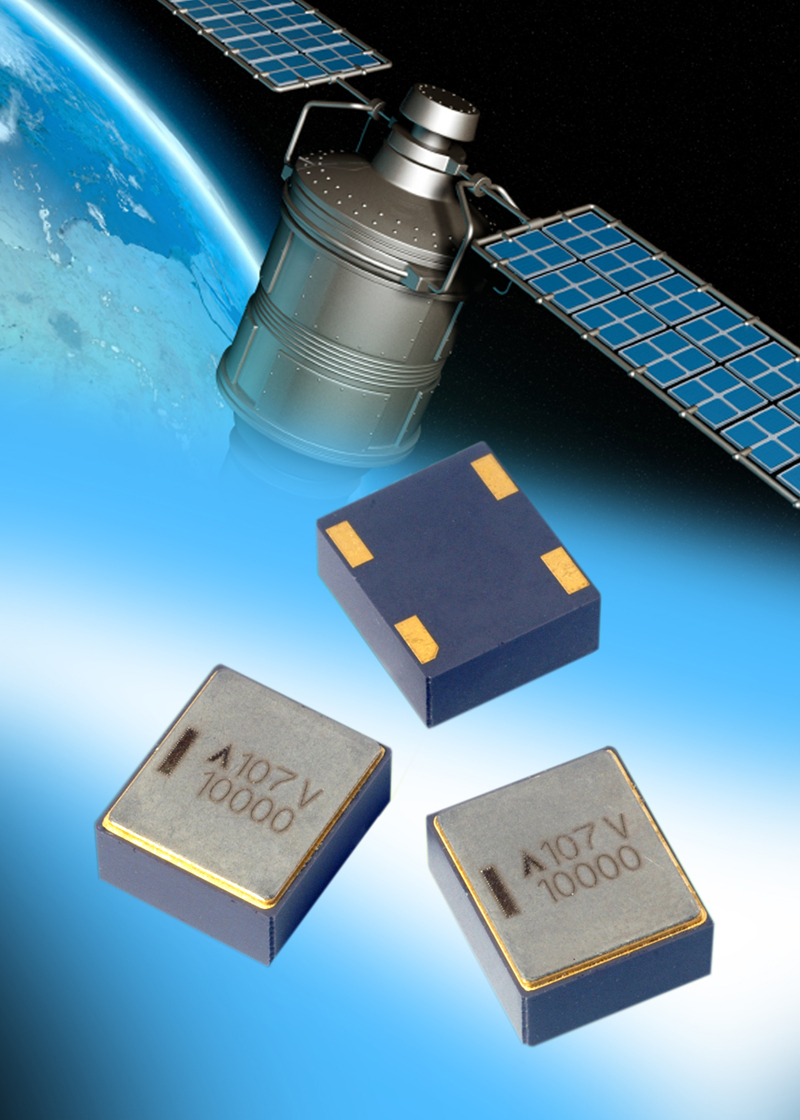