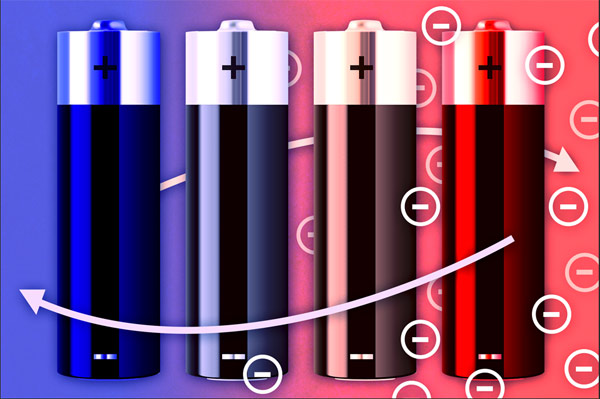 Stanford and MIT researchers have developed a four-stage process that uses waste heat to charge a battery. First, an uncharged battery is heated by waste heat. Then, while the battery is still warm, a voltage is applied. When fully charged, the battery is allowed to cool, which increases the voltage. Once the battery has cooled, it actually delivers more electricity than was used to charge it.

Vast amounts of excess heat are generated by industrial processes and by electric power plants. Researchers around the world have spent decades seeking ways to harness some of this wasted energy. Most such efforts have focused on thermoelectric devices – solid-state materials that can produce electricity from a temperature gradient – but the efficiency of such devices is limited by the availability of materials.

Now researchers at Stanford University and the Massachusetts Institute of Technology have found a new alternative for low-temperature waste-heat conversion into electricity – that is, in cases where temperature differences are less than 100 degrees Celsius.

The approach is described in a study, published in the May 21 issue of the journal Nature Communications, by Seok Woo Lee and Yi Cui at Stanford and Yuan Yang and Gang Chen at MIT.

"Virtually all power plants and manufacturing processes, like steelmaking and refining, release tremendous amounts of low-grade heat to ambient temperatures," said Cui, an associate professor of materials science and engineering. "Our new battery technology is designed to take advantage of this temperature gradient at the industrial scale."

Voltage and temperature
The new Stanford-MIT system is based on the principle known as the thermogalvanic effect, which states that the voltage of a rechargeable battery is dependent on temperature. "To harvest thermal energy, we subject a battery to a four-step process: heating up, charging, cooling down and discharging," said Lee, a postdoctoral scholar at Stanford and co-lead author of the study.

First, an uncharged battery is heated by waste heat. Then, while the battery is still warm, a voltage is applied. Once fully charged, the battery is allowed to cool. Because of the thermogalvanic effect, the voltage increases as the temperature decreases. When the battery has cooled, it actually delivers more electricity than was used to charge it. That extra energy doesn't appear from nowhere, explained Cui. It comes from the heat that was added to the system.

The Stanford-MIT system aims at harvesting heat at temperatures below 100 C, which accounts for a major part of potentially harvestable waste heat. "One-third of all energy consumption in the United States ends up as low-grade heat," said co-lead author Yang, a postdoc at MIT.

In the experiment, a battery was heated to 60 C, charged and cooled. The process resulted in an electricity-conversion efficiency of 5.7 percent, almost double the efficiency of conventional thermoelectric devices. This heating-charging-cooling approach was first proposed in the 1950s at temperatures of 500 C or more, said Yang, noting that most heat recovery systems work best with higher temperature differences.

"A key advance is using material that was not around at that time" for the battery electrodes, as well as advances in engineering the system", said co-author Chen, a professor of mechanical engineering at MIT. "This technology has the additional advantage of using low-cost, abundant materials and manufacturing processes that are already widely used in the battery industry," added Lee.

'Clever idea'
While the new system has a significant advantage in energy-conversion efficiency over conventional thermoelectric devices, it has a much lower power density – that is, the amount of power that can be delivered for a given weight. The technology also will require further research to assure long-term reliability and improve the speed of battery charging and discharging, Chen added. "It will require a lot of work to take the next step."

There is currently no good technology that can make effective use of the relatively low-temperature differences this system can harness, Chen said. "This has an efficiency we think is quite attractive. There is so much of this low-temperature waste heat, if a technology can be created and deployed to use it."

The results are very promising, said Peidong Yang, a professor of chemistry at the University of California, Berkeley, who was not involved in the study. "By exploring the thermogalvanic effect, [the MIT and Stanford researchers] were able to convert low-grade heat to electricity with decent efficiency," he said. "This is a clever idea, and low-grade waste heat is everywhere."

Other authors of the study are Hyun-Wook Lee of Stanford and Hadi Ghasemi and Daniel Kraemer of MIT.