The Silent Power of Supercapacitors 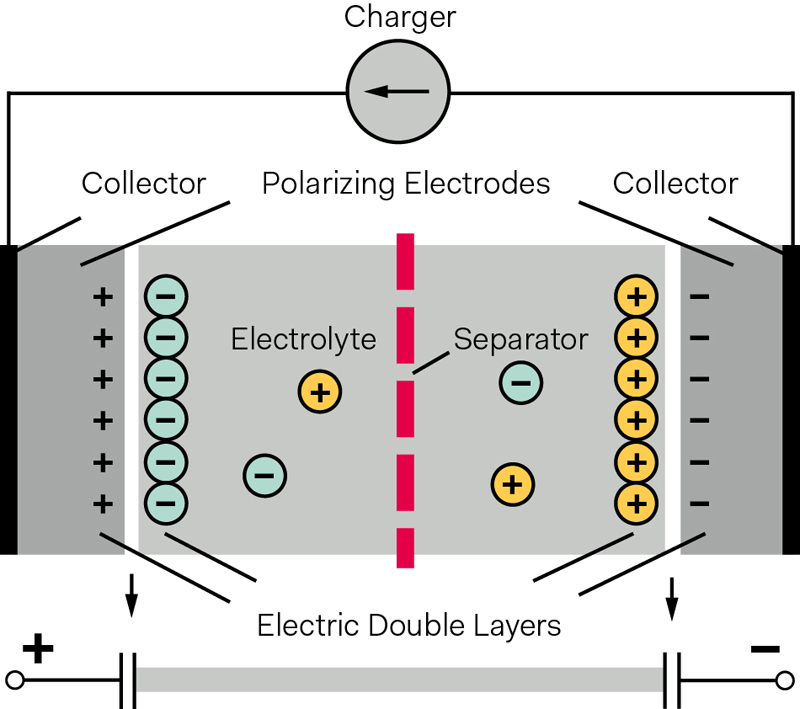 Figure 1: Supercapacitor cell basically consists of two electrodes, a separator, and an electrolyte.

In the unceasing quest to increase the performance of power electronics, new components and technologies such as wide-bandgap semiconductors and digital power management are receiving most of the hype. However, hiding in the shadows there is a component that is very important and intrinsically involved in many vital applications. The supercapacitor is found almost everywhere, although perhaps because they are seen as passive components with a low-tech connotation, they are seldom on centre stage.

From Howard Becker to Elon Musk

In the early fifties, when capacitors were made out of impregnated paper and mica, General Electric researched ways to increase their capacity to store and release higher energy levels, as well as to be able to absorb voltage distortions in electronics. Research was conducted by Howard I. On 14th April 1954, Becker and his team filed a patent for a ‘Low voltage electrolytic capacitor’ using a porous carbon electrode. On 23rd July 1957 the US2800616A patent was granted, opening the road for further innovation. Becker’s invention was the beginning of a race between laboratories to convert the it into a component capable of being mass manufactured (in 1958, Philips NV patented a process for the production of electrodes for electrolytic capacitors) with higher performance levels. The electrolytic capacitor was born.

Although the invention of the electrolytic capacitor was an important step forwards for the electronics industry, the capacity was still not enough to store the higher levels of energy required to stabilize an electricity network or to deliver the extremely high energy levels required by applications in the defense industry. It took another six year of research after Becker’s patent for the Standard Oil Company’s engineer Robert A. Rightmire to be granted patent US3288641A for an ‘Electrical energy storage apparatus’, which is described as: “An electrical energy storage device for storing energy in electrostatic condition as double layers of electron-ions and proton-ions at co-acting interfaces..” The supercapacitor was born!

Interestingly, it then took another 10 years for the invention to reach the market.

How does it work?

A capacitor consists of two metal plates or conductors separated by an insulator such as air or a film made of plastic or ceramic. During charging, electrons accumulate on one conductor and depart from the other. Using normal manufacturing practices a conventional capacitor’s energy storage is limited by the laws of physics and that is where Robert A. Rightmire’s invention opened new avenues for high energy storage.

A supercapacitor cell consists of two electrodes, a separator, and an electrolyte. The electrodes are made up of a metallic collector that is the high conducting part, and of an active material (metal oxides, carbon and graphite are the most commonly used) that is the high surface area part. The two electrodes are separated by a membrane that allows mobility of the charged ions, but forbids electrical conductance. The system is impregnated with an electrolyte (Figure 1). The geometrical size of the two carbon sheets and of the separators are designed in such a way that they have a very high surface area. Due to its structure, the highly porous carbon can store more energy than any other electrolytic capacitor.

When a voltage is applied to the positive plate, it attracts negative ions from the electrolyte, and when a voltage is applied to negative plate, it attracts positive ions from electrolyte. As a result, ion layers form on both sides of the plate in what is called a ‘double layer’ formation, resulting in the ions being stored near the surface of the carbon. This mechanism gives supercapacitors the ability to store and restore high energy in a very short time period.

The surface of the active part is the key to the supercapacitor’s capacity and from what we know, increasing the surface area increases the capacity. What is particularly interesting and exciting in supercapacitor technology are the possibilities offered by the introduction of nanotechnologies. One example is to replace the conventional active carbon layer with a thin layer of billions of nanotubes. Each nanotube is like a uniform hollow cylinder 5nm diameter and 100um long, vertically grown over conducting electrodes. By using billions of them it is possible to reach extremely high density levels of capacity. 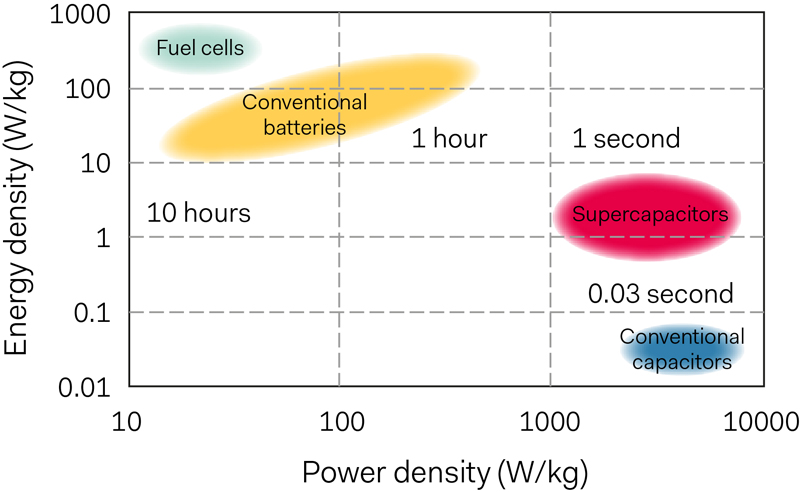 Figure 2: Energy vs power density for different types of energy-storage devices
Source of the picture: PRBX

Each of those technologies has their advantages and disadvantages that power designers take into consideration when developing power systems. In Figure 3, we compare the key parameters of Li-ion batteries and supercapacitors, and it is obvious that one of the key benefits of supercapacitors is the extremely high cyclability, meaning that it can be charged and discharged virtually an unlimited number of times, which is unlikely ever to be the case for the electrochemical battery. 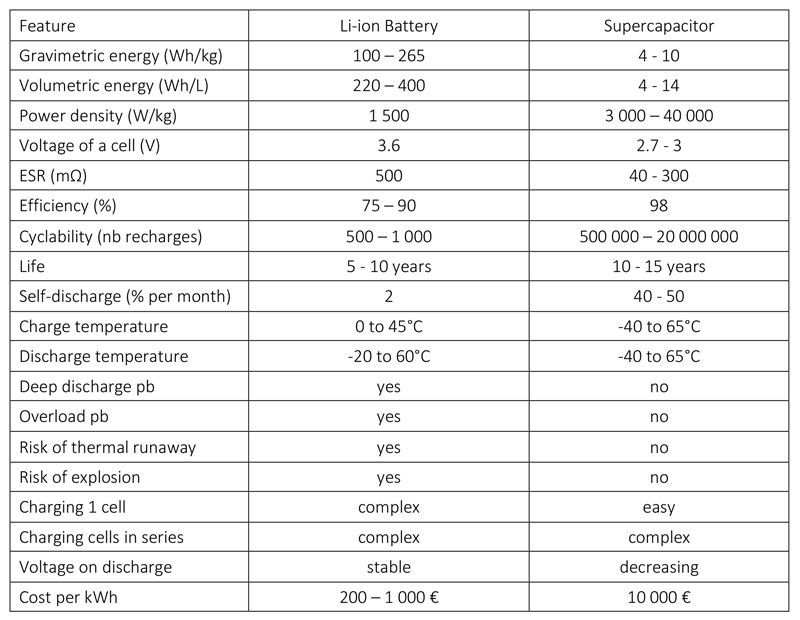 Figure 3: (Table) – Comparison of the key parameters between Li-ion batteries and supercapacitors
Source of the picture: PRBX

Longevity is also a metric that favours supercapacitors. Under normal conditions, from 100 percent capacity they only lose 20% over 10 years, which is way above the levels achieved by any battery. For systems designers having to power systems in harsh environments, supercapacitors will operate in very low to high temperatures without degradation, which is not the case for batteries. On the downside supercapacitors discharge from 100 to 50 percent in 30 to 40 days, whereas lead and lithium-based batteries self-discharge about 5 percent during the same period, but technology is improving daily and supercapacitors are becoming better and better.

With the growing demand for renewable energy and issues relating to energy storage, there is a rising question about the reasoning behind building huge banks of Lithium Ion batteries. We all know that those batteries have a limited lifetime, but as well as consuming precious raw materials they’re not easy to recycle and there are the associated environmental risks. This is where current research is very interesting. In February 2018, the Universities of Surrey and Bristol made a presentation on the development of polymer materials. They achieved practical capacitance values of up to 4F/cm2 when the industry standard is 0.3F/cm2, and they are expecting to reach 11-20F/cm2 in the near future. When such levels of capacity are achieved we will be close to 180Wh/kg, around the same as lithium ion batteries.

Supercapacitors are almost everywhere and it is almost impossible to draw up an exhaustive list of applications. From the Shanghai bus experiment to run a fleet of buses powered only by supercapacitors to smart meters and harvesting energy, they are prevalent in many applications.

It is their ability to sustain high charge and discharge cycles that makes them ideal for private and public electrical vehicles and machinery such as port-cranes to accumulate and re-use energy. But in many applications, when designers need peak power, they are there.

If you are an audiophile your audio amplifier might contain a supercapacitor bank able to deliver kilowatts of peak power to your bass loudspeaker. If you have a smart meter at home, it most probably contains a supercapacitor able to deliver peak power when transmitting stored data via the GPRS module. And again, if you are a technology geek following the Lamborghini ‘Terzo Millennio’ project, you will have noticed how important a role supercapacitors play in the motorization of this very special, electric powered sports car.

Safety is another benefit of supercapacitors and that is the reason why they are the first choice when backup or peak power is required in a restricted environment. Critical applications operating in hostile or confined environments are strictly regulated in terms of chemical and other hazardous risks, reducing or forbidding certain type of batteries such as Lithium Ion. For safety reasons, those applications must have a power backup long enough to run alarms and safety shutdown processes. In such arduous conditions, conventional batteries are replaced by supercapacitor banks whose values could be from a few Farads to 200 Farads for general applications (Figure 4).

As we have seen, supercapacitor technology is moving extremely fast. The challenges posed by the energy storage issue is probably the area where we will see the more immediate benefits of nanotechnologies being implemented in supercapacitors.

So in a degree of silence supercapacitors are becoming the most promising component for the future. Many power designers are already implementing power solutions based on supercapacitors, but considering how fast research takes place and the huge challenges that humanity faces due to climate change, one day in the not too distant future, supercapacitors will be the heart of modern power solutions.