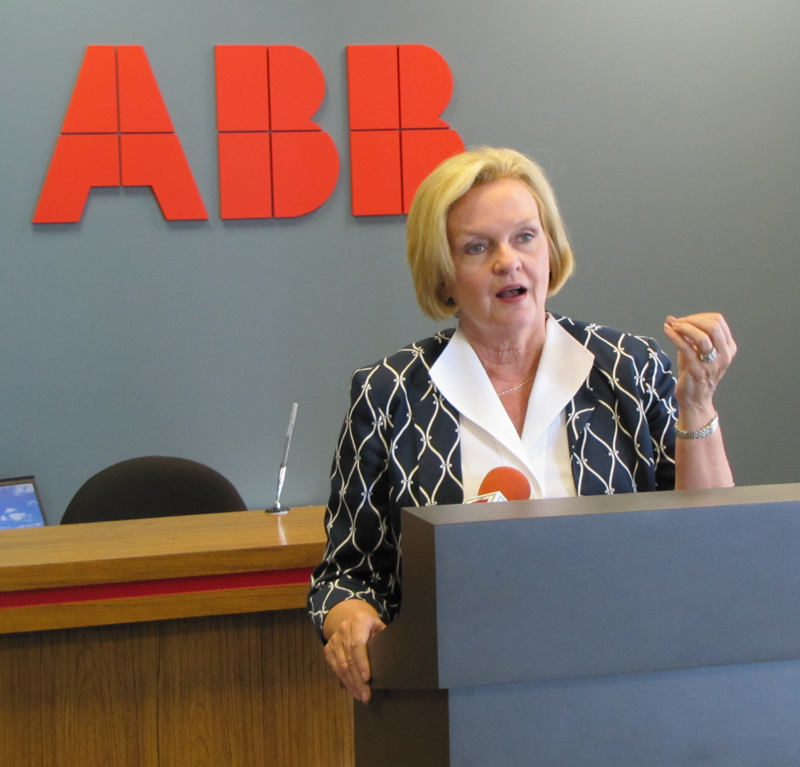 The Honorable United States Senator Claire McCaskill (D-MO) visited the ABB power transformer facility in St. Louis on August 9 to learn how companies like ABB, the world's leading provider of transmission and distribution equipment for the power grid, are using advanced "smart grid" technologies to interconnect with America's vast wind power resources. Senator McCaskill visited ABB's power transformer plant on Semple Avenue off of Interstate 70 and took a walking tour of the large transformer factory before meeting with ABB plant employees. The Senator and ABB officials discussed mutual goals and ways that government and the power industry might work together to promote standards and policies - such as a national Renewable Energy Portfolio under review proposed by the American Wind Energy Association (AWEA) - that will further enhance growth in homegrown renewable energy sources, and jobs, within the United States. ABB is heavily involved in providing infrastructure equipment for the wind industry, including transformers that interconnect wind power from wind farms to the nation's power grids. "We were privileged to have Senator McCaskill choose to visit our ABB power transformers facility in St. Louis," said Krzysztof Kulasek, general manager of the ABB facility in St. Louis. "We had a very fruitful dialogue discussing how more support is needed to maximize our vast homegrown wind power resources and interconnect them onto the power grid." Senator McCaskill praised ABB employees for their continued dedication in the face of tough market conditions. ABB Executives and the Senator also discussed a recent petition filed by the US Transformer Fair Trade Coalition with the United States International Trade Commission and the United States Department of Commerce for the investigation of dumping of large power transformers. ABB, the leading power and automation technology company, has two major transformer facilities in the state of Missouri, in St. Louis and Jefferson City. The Jefferson City plant has produced more than 3,500 wind farm application transformers in the past five years, and both St. Louis and Jefferson City have won significant wind and solar power orders. The St. Louis facility, which has been open for more than 50 years, creates medium-to-large power transformers for the power grid and employs over 250 people. ABB's largest factory in the U.S., located in Jefferson City - maker of distribution transformers found in many neighborhoods and industrial settings - employs nearly 700 employees. More than 70 percent of all transformers found in today's U.S. power grid were built by ABB or one of its legacy companies. ABB provides wind power technology solutions for everything from electrical design to substation construction. ABB's comprehensive product portfolio includes generators, low-voltage and medium-voltage converters, breakers, transformers, switchgear, low-voltage products and cables. ABB is a leader in power and automation technologies that enable utility and industry customers to improve performance while lowering environmental impact. The ABB Group of companies operates in around 100 countries and employs about 130,000 people. The company's North American operations, headquartered in Cary, North Carolina, employ about 20,000 people in 20 manufacturing and other major facilities. www.abb.com