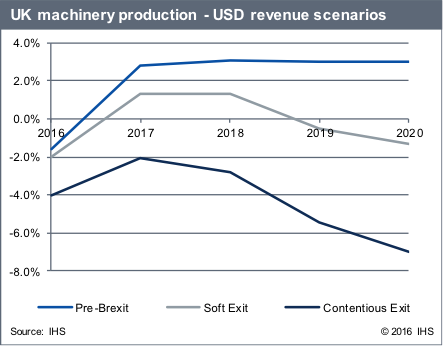 IHS Markit Economics and Country Risk predicts that Brexit will reduce global GDP growth in 2017, but the hardest hit will be the United Kingdom, then Europe (including Spain, Germany, France and Poland) – and as far-away as Singapore and Brazil. Even before Brexit, IHS Markit predicted that U.K. machinery production would contract 1.6 percent in 2016 and grow around 3 percent on average through 2020.

The negative impact on the U.K.’s $30 billion machinery production market will depend largely on whether Brexit will be a soft exit or a contentious exit from the European Union (EU). A contentious exit would have an EU that seeks to maintain cohesion and make trade rules and regulations that would result in fewer machinery imports from the U.K. It could perhaps even re-route entire supply chains out of the U.K.

In this scenario, the EU would strictly enforce the Common Customs Tariff that applies to goods crossing the EU’s external borders. Currently, EU importers are committed to existing manufacturing sites in the U.K., and many have mentioned there are no immediate changes needed; however, others mention, worryingly, that supply conditions will have to be renegotiated.

A soft exit would require renegotiating terms of trade, which could result in some trade friction, but would be on amicable terms. In fact, a tariff-free trade pact with the EU could benefit some manufacturers in the U.K. and provide long-term potential benefits. David Davis’s appointment as Minister for Brexit makes a complete exit more likely, with all the risks that process entails. Davis is unlikely to settle for a half-Brexit political compromise, and has resigned from government on principal before.

Below are the results of our scenario modeling with three scenarios: pre-Brexit, a soft exit and a contentious exit and the predicted long-term impact by industry. In the short-term, the weaker British Pound will improve competitiveness but towards the end of the forecast the effects of EU tariffs, loss of customers in Europe and weaker UK labor markets begin to take hold.

While the U.K. has a balanced mix of machinery industries, compared to other countries, its machinery exports are more concentrated by industry and especially by export region (specifically the EU).

Machinery exports, as defined under SIC, provide several segments that align with machinery production to estimate where machinery equipment is exported. For example, materials handling and packaging machinery are a subset of the general industrial-export segment, construction and mining machinery a subset of mining and construction, while special industry serves as a catch-all for things like robotics, medical and scientific, and plastic and rubber machinery.

In absolute terms, the materials handling, packaging machinery, mining and construction machinery export segments of machinery production would be most at risk from Brexit. Agricultural, heating and cooling and machine tools machinery equipment segments would be the most sensitive to any changes in EU demand, with 45 percent to 62 percent of global exports going to the EU.

Even before Brexit, the U.K.’s machinery production had been in decline, according to the trailing twelve-month indicator tracking from IHS Markit, falling 11.2 percent year-over-year, primarily as a result of the U.K.’s machinery sector’s exposure to commodity exporters in South America and elsewhere. Brexit presents an opportunity to U.K. machinery equipment manufacturers, by allowing more flexibility to enter trade agreements on its own terms and benefit from a weaker currency. IHS predicts that the British pound (GBP) will depreciate against the U.S. dollar -- bottoming out at $1.20 per GBP in 2016 and rising to nearly $1.50 in 2019 -- and the Euro, which will make exports more competitive from 2016 to 2019.

There are risks to Brexit, however, that may outweigh any benefits. In the U.K., skill migration will become more difficult, and the increased labor cost to attract highly skilled workers needed for the factories of the future -- and Industry 4.0. Labor mobility -- is more likely to be a slow drag on growth over the next decade, but it is an important one to monitor. The more pressing issue is that regulations and trade rules have to be renegotiated, and this may be the most difficult hurdle to overcome, depending on whether the EU provides for a contentious or soft exit.