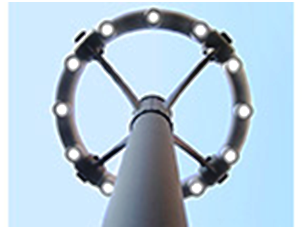 Thirty-seven commercial LED outdoor lighting products were recognized for excellence by the fifth annual Next Generation Luminaires (NGL) Solid-State Lighting (SSL) Design Competition, it was announced today at Strategies in Light. Sponsored by the U.S. Department of Energy (DOE), the Illuminating Engineering Society of North America, and the International Association of Lighting Designers, NGL was launched in 2008 to promote excellence in the design of energy-efficient LED luminaires for general illumination in commercial lighting applications. The competition began evaluating indoor and outdoor products separately in 2012, and the winners announced today are the 2012 outdoor winners - the first outdoor winners to be announced as part of a separate NGL competition. Compared to previous years, the 2012 NGL outdoor results show a marked improvement in overall performance. The recognized products performed best in terms of color, illuminance, and light distribution and not quite as well in terms of glare, which was somewhat of a concern to the judges. Tellingly, color and distribution, together with increasing efficacy, highlight the substantial improvements manufacturers continue to make in product quality and performance. In terms of form factors, the judges saw some encouraging entries and would like to see more development in this area. The idea behind NGL is to make it easier for lighting designers and specifiers to find LED lighting products that are worthy of specification. This means recognized products have to measure up on many fronts. NGL outdoor entries for 2012 were judged on color, appropriate illuminance, light distribution, glare control, appearance, serviceability, value, and energy efficiency. Power quality and lumen maintenance were also evaluated, and flexibility, innovation, and controllability were taken into consideration when appropriate. "The goal here is to recognize products that are not only attractive, but that are also energy-efficient and deliver good lighting quality," said DOE Solid-State Lighting Program Manager Jim Brodrick. "It reminds me of football, where the most-effective quarterbacks aren't just good passers - they can also run well and see the whole field." A total of 176 products were proposed for submission to the 2012 NGL outdoor competition, but because of the stringent documentation requirements, only 151 were approved to continue in the competition. The rest were rejected either because they weren't ready for market or because their manufacturers couldn't supply the required documentation, which covered such things as LM-79 test reports and LM-80 life claim documentation. These performance documents helped ensure that actual performance matched what was claimed. Of the 151 products that were approved to continue in the competition, only 120 actually made it to the judging phase, which was conducted after dark at the Virginia Tech Transportation Institute (VTTI) and scored on iPads. The other products were eliminated for a variety of reasons. To evaluate the lighted performance and appearance, street and roadway luminaires were installed on poles at appropriate heights along roadways, parking lot luminaires were installed on a truss in a parking area, parking garage luminaires were installed indoors, and other building-mounted or landscape luminaires were installed on or near exterior facades or indoors. The 120 products that were judged represented 42 different manufacturers and covered 10 different outdoor-lighting categories. Of those products, 37 were chosen as "recognized" winners, meaning that they were considered worthy of specification. Of the 37 recognized products, four received the additional designation of Best in Class, meaning that they stood out significantly above the other products in their category that were recognized as specifiable. The Best in Class winners came from four different manufacturers and covered four areas of outdoor lighting: The Lighting Quotient was selected for its fraqtir™ Outdoor - Style S170 facade lighting fixture, Relume Technologies Inc. for its OXFORD decorative acorn streetscape and walkway luminaire, GE Lighting for its Evolve™ LED Scalable Cobrahead roadway fixture, and Edge Lighting for its TV and Dial LED decorative wall sconces. In the "Recognized" category, LSI Industries, Lumiere, Landscape Forms, and GE Lighting earned praise for their streetscape and walkway lighting. Cooper Lighting and Excellence Opto were recognized for roadway lighting, and Philips Wide-Lite for canopy lighting. In parking garage lighting, Rab Lighting and Relume Technologies were commended. Multi-function exterior lighting was popular, with recognition given to designs by Philips Color Kinetics, LumenPulse (two fixtures), Lithonia Lighting, G Lighting, Rab Lighting (two fixtures), Juno Lighting Group, Stonco Lighting, and LSI Industries. Five parking lot lighting fixtures were recognized: from Leotek Electronics USA, GE Lighting, Kenall Lighting, Cree, and Horner. Although they did not earn recognition for their lighting and energy performance, three products were noted for their interesting form factors: a parking lot fixture from Cree, and streetscape and roadway fixtures from Eleek and Philips Lumec. The awards were presented at Strategies in Light in Santa Clara, CA, on February 14, 2013. By encouraging new designs and technologies, Next Generation Luminaires aims to increase market acceptance and awareness of LEDs for general-illumination lighting. Next Generation Luminaires