World relays market fell in 2012 but recovery expected this year 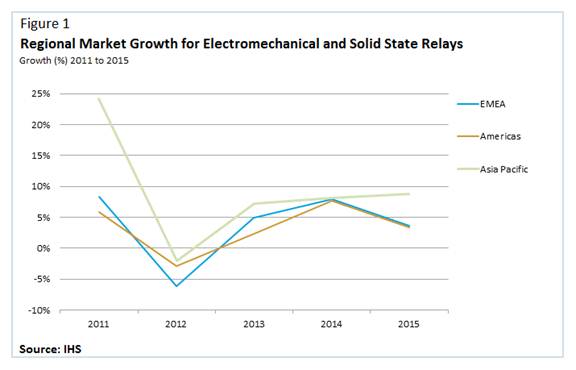 After two years of double-digit growth, the world market for electro-mechanical and solid-state relays contracted by $125 million, or 3.6 percent, to approximately $3.35 billion in 2012, according to a new report from IMS Research, now part of IHS. This represents the first decline since 2009, when well over a quarter of market revenues were lost. However, the drop in 2012 was far smaller in both magnitude and duration than in 2009. Growth is expected to return to all regional markets in 2013, which will result in global revenues increasing by 5.2 percent to reach $3.54 billion. The report—measuring automotive, industrial (socket mount), solid-state and PCB mount relay designs—found that the markets for these products retreated in all major regions in 2012. The Europe-Middle East-Africa (EMEA) territory showed the largest decline, down 6.2 percent, which far exceeded the 2.9 percent fall experienced in the Americas. But the largest reversal occurred in Asia-Pacific, where very high growth of more than 24 percent in 2011 was succeeded by a 2 percent loss overall in 2012. "Asian-based relay manufacturers were reporting domestic sales growth of more than 40 percent in Asia during 2011, which was far higher than in recent years," said Robert Carter, switchgear analyst at IHS. "However, as industry levels cooled in 2012, particularly in China, demand fell so that this unprecedented growth was then followed by a decrease of up to 15 percent for these same companies." Even so, the market downturn won't last long. "Growth is expected to return in every regional market in 2013," Carter said. "After this point, stabilized annual growth of around 2 to 3 percent in both EMEA and the Americas, along with a modest 6 to 8 percent expansion in Asia-Pacific, is expected to cause the market for relays to reach almost $4.5 billion by 2017." IHS