As we are all very well aware, there are mounting concerns about the state of the environment and the impact that carbon emissions are having on the global ecosystem. There is also rising uncertainty about the long term supply of oil, as greater demand from emerging economies means that reserves are being consumed at an accelerated rate (with 35 billion barrels now being shipped each year, according to the International Energy Agency). Automobile manufacturers therefore face considerable challenges ahead. They need to develop car models that are capable of delivering improved levels of fuel economy. Through this they can ensure they continue to comply with international legislation and also keep ahead of their competitors, offering the car-buying public vehicles that are cheaper to run and more eco-friendly.

One of the key methods for addressing this increasingly critical issue, and thus abide by the stringent regulatory guidelines that have now been put in place, is to reduce the mechanical load on the traditional petroleum powered engine.  Another method is to reduce the overall mass of the automobile such that the less energy (fuel) is required to provide the same driving experience.  The migration from the use of conventional mechanical systems to ones that are predominantly electrically based will help with both approaches. Electrical coolant and oil pump in addition to electrical power steering are common examples of this shift in design methodology.  In addition the desire to further optimize more traditional implementations of electric motors in car such as side mirror adjustment, seat positioning, climate control, window opening/closing is further driving innovation in electromechanical design.

Currently both, brushed DC and brushless DC (BLDC) motors are being employed for automotive applications. However, the popularity of BLDC implementations is rapidly increasing because they possess numerous attributes that are highly appealing to automotive engineers. Among the most prominent of these are:

· BLDC motors offer a much higher degree of control than DC devices, with variable speed operation supported (which is much more energy efficient).

· BLDC motors generally exhibit greater compactness than a DC motor of equivalent output power. This means that their implementation will lead to the saving of valuable space (something that is becoming increasingly limited in modern automotive design, due to the greater volumes of wire harnessing and suchlike now being included).

· As BLDC motors do not require either brushes or commutators,there arethus no sparking ornoiseproblems to contend with.

· BLDC motors are not subject to wear and tear (something that blights DC motors). This means they can support substantially longer operational lifespans - thereby mitigating the costs associated with repair or replacement.

Based on this, it is clear that BLDC motors can prove highly advantageous when they are installed into automotive systems. They do, however, require more sophisticated driving electronics than their DC counterparts. In many cases, discrete solutions are employed for driving BLDC motors, with a multitude of off-the-shelf components covering the power, control, protection and thermal management activities involved. Typicallyit will require the specifying and installing of 13-16 discrete components. This discrete approach is starting to be considered outdated, however, as both commercial and technical pressures become ever more acute. It relies on the procurement, placement and testing of too many elements to make it realistically viable in the future. Also it simply is not space efficient or particularly cost effective.

The use of power modules with highly integrated construction has providing the industry with a more attractive alternative. It has enabled reductions in component count and space utilization to be witnessed, as well as increasing reliability (as there are fewer items involved that could potentially fail). Also it has meant that the inconvenience of placing discrete devices can be circumvented. In addition, this approach requires less engineering resources to be allocated to the task, resulting in shortened design cycles and lowering the investment needed. The emergence of next generation power modules with even higher degrees of integration and more innovative packaging technology (where a thermally conductive metal substrate has been utilized) holds the key to further progression in BLDC motor control.

Direct bonded copper (DBC) substrate construction is expediting the development of more advanced power modules that are able to bring about a number of operational and logistical advantages over either discrete deployments or conventional power module solutions. In basic terms the DBC substrate comprises an insulating ceramic which offers superior thermal conductivity. This ceramic layer is flanked on either side by a highly conductive copper layer. The external copper plate is covered with a finishing layer, while the internal copper layer serves as the basis for a printed circuit layout. The components are soldered directly onto the DBC. Interconnect bond wires allow connection between the dies and the printed circuit layout, or between different components inside the module. This dramatically reduces the physical footprint of the system which yields immediate savings in size and weight of the finished solution.

DBC also enables the thermal path of the power system to be significantly shortened without having to compromise on the electrical isolation. Through its employment power modules can be introduced where bill of materials costs have been dramatically lowered, development times accelerated and thermal performance improved. This technology also supports implementation of much smaller layouts than are possible via the alternative approaches previously outlined. As a result markedly higher power densities can be derived. It also dispenses with the need for additional insulation between the power module and the heat sink, which gives engineering teams greater design flexibility. The superior thermal performance also means that a smaller heatsink can be specified for the motor drive system - once again saving weight, space and lowering the cost of the total system.

In response to this growing need for more sophisticated, higher performance power modules to address automotive motor control, ON Semiconductor has positioned itself at the forefront of DBC based power module design. The company has introduced the STK984-190E. This is 30 A/40 V rated MOSFET power module, which is highly optimized for 3-phase BLDC motor drive applications within an automotive setting. It comprises 6 MOSFET devices in a 3-phase bridge configuration. These are accompanied by an additional MOSFET which is assigned the role of providing a reverse battery protection switch mechanism. The module comes in dual in-line package (DIP) that measures just 29.6mm x 18.2mm x 4.3mm - a far smaller form factor than any equivalent product on the market.

As all the MOSFETs featured in the STK984-190-Eare fully AECQ101 compliant, the module has the capacity to deal with the difficult conditions that are found in automotive application settings. It is highly optimized for incorporation into 12V automotive applications, including pumps, fans and windscreen wipers. A 40°C to 150°C operational temperature range is supported. The STK984-190E can be used in conjunction with ON Semiconductor’s LV8907UW sensor-less motor controller IC (which incorporates a LIN transceiverfor in-vehicle networking purposes) to provide a complete reference design for automotive BLDC motor control. 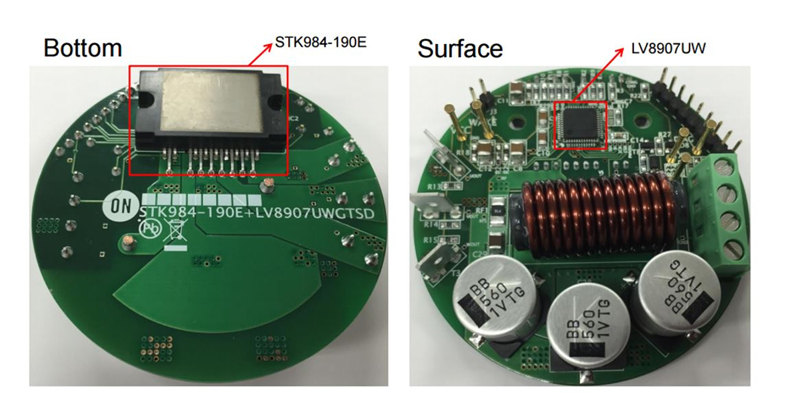 Through employing a more integrated strategy it will be possible to increase the efficiency 3-phase BLDC motor drives while simultaneously allowing the complete system to be much more compact and lightweight in nature than was previously possible, as well as exhibiting greater reliability characteristics.The high power density levels achieved by modules, such as the one just detailed, means that they will require only half the board space and half the component count that conventional discrete solutions would call for - a level of downsizing certain to have major impact on automotive electronics development moving forwards. These highly advanced metal substrate modules will consequently allow engineers to adhere to the improvements in fuel economy and space utilization now being expected by the automobile industry.