Success of advanced and emerging technologies via functional testing 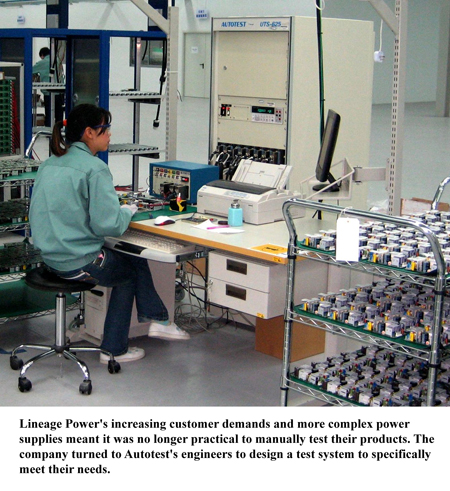 Project managers within industries such as bio med, alternative energy, smart appliances, communications, consumer electronics and defense now increasingly look to custom designed and manufactured automatic testing equipment (ATE) that can functionally test new units that employ advanced technologies. By going beyond simple parameter testing that limits the use of commercial off the shelf (COTS) testers, specialty-built functional ATE helps guarantee high intrinsic availability and long-lived performance "to spec" in the field, thereby facilitating the acceptance and success of new technologies in the marketplace.

Today's advanced aerospace, medical, defense - and arguably, communications, alternative power, and automotive applications - all require mission-critical operation at times. Only specifically designed, function-testing ATE can help guarantee such demanding levels of performance that approach 0.99 intrinsic availability. For this reason, many contract-driven customer acceptance tests now require some degree of functional testing at the very top of the test pyramid.

Functional ATE succeeds by creating an environment for the module or system being tested that closely mimics what will be encountered in the field, and then puts that unit under test through its paces to ensure it reacts properly at the right time. The most complete testing suites can bring the system up, issue and respond to commands and controls in real time, and shut the system down as per the product specifications. Catalog-available test equipment cannot duplicate such dynamic testing since it basically only performs simple parameter testing of tolerances and output levels. "The automated test equipment that Autotest Company built for us helps us to do a more thorough job of performing checks that you might skip if you were doing it manually," says Joe Basta PMP, Project Manager for Spacelabs Healthcare based in Issaquah, Washington, a provider of the world's most respected medical devices and services. "For example, I might manually check a power supply at three or four different places, measuring the voltage over load at a given temperature. But the fact of the matter is, the automated functional testing equipment can do several tests really fast and find potential points of failure that a technician couldn't find working alone. The ATE even has the functionality to test communications, which is important for us since some of our monitors communicate with a hospital's network." 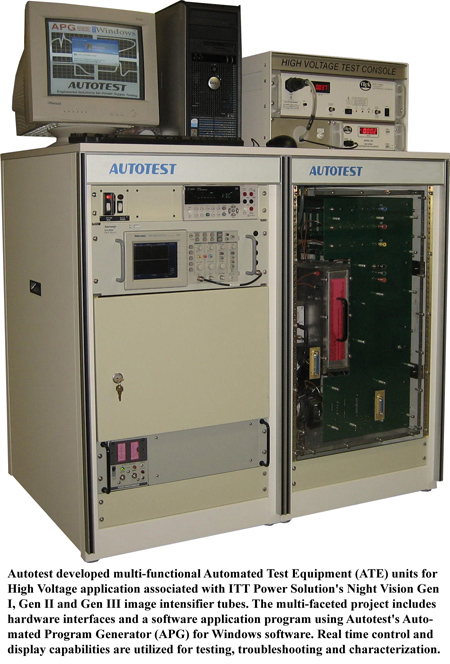 Functional ATE can help weed out variations in parts, important because one component might have the same output value as another but still not function correctly at the next higher level. Without such functional automation, numerous man-hours get consumed in going down the test pyramid to recheck every new part. "Manufacturing made a change to a transistor to address an obsolescence issue in one of our monitors" recalls Basta. "Following this change the unit no longer passed the ATE test by a very small amount. The easy out would have been to adjust the tolerance slightly and move on. We had been building this part for many years though and had never had a failure in this area. Engineering analysis of the circuit showed that the new transistor did not have the same characteristics as the old part. The Autotest functional tester had correctly identified an issue with the device under test. This issue would most likely have been missed in a manual test because this particular parameter probably would not have even been tested. It is exactly this type of issue that makes automated testing so valuable; not only is it much faster but it can be much more thorough and very repeatable."

Recognizing the need for functional testing, some manufacturers have elected to have in-house engineering kluge together a black box to do a functional test. However, when it comes to creating a system that can be placed on the plant floor to test production quantities, the do-it-yourself approach often falters for lack of time, money and on-going support.

"We didn't build a functional tester in-house because our core competency is in medical monitoring," Basta says. "Neither did we have sufficient manufacturing and engineering resources to devote to designing our own test equipment." Adding to the difficulty is the complexity of modern equipment. Even with something as simple as a power supply, the characteristic of the loads are different than what they used to be, entailing immediate demands for high current without any significant drop in voltage. "We were manually testing switch-mode power supplies on the bench, which was very slow and there was always a chance for human errors," says Scott Whiteman, a test engineer with Lineage Power in Tustin, California. "As our customer demands increased and the power supplies got more complicated it was clear that we could no longer manually test our products. Many of these supplies had up to 15 outputs and each one required multiple tests, resulting in 50 to 100 tests per power supply. At that point it was no longer practical to manually test our products". In order for ATE to meet the functional testing needs of any given product, information sharing between the ATE manufacturer and the customer becomes all-important. Such collaboration paid off when we worked with Lineage. Through this collaboration, we were able to design a test system specifically built around their needs, configuring a software program so that the one tester could perform several functions as would occur under use. The outputs were checked under load in real time. This helped our client meet our internal requirements as well as the customer acceptance requirements. The cost-effectiveness of functional ATE comes from taking standard test equipment and rebuilding and reconfiguring it in response to the requirements of the specific application at hand. In use at Autotest, Automatic Program Generator for Windows™, Universal Tester Software serves as an excellent platform from which to build a complete programming and system control environment. The application modules of APG for Windows™ are dynamically linked for multi-tasking, providing the test engineer comprehensive control over the tester, programs and the unit under test.

The flexibility of such turnkey ATE systems also pays off within specialty markets where projects might be large in size and complexity but not high in volume, making it hard to justify using company resources to create a testing suite from scratch. Functional testing with ATE became the only option when Lockheed Martin's Naval Electronics and Surveillance Systems division needed to test the motor control module for its MK 41 surface vertical launch (VLS) system. The project involved the integration of military critical tasks and codes with industry standardized test scenarios, yet the necessary instrumentation and program sequencing for functional testing had never been created before. The ATE had to test the system that opens the hatch for the missile to exit. The complexity demanded that we work together closely with the Lockheed engineers to develop a functional testing product that could test their power supply and motor control modules, as well as the proprietary Ethernet bus used in communicating with their instrumentation. Utilizing hardware interfaces and software application programming with APG for Windows software, real time control and display capabilities were created for testing, troubleshooting and characterization. The MK 41 VLS is now utilized around the world by 11 countries in 16 different ship classes. ITT Power Solutions, a division of ITT Corporation, Inc., experienced similar success with the functional testing of the power supplies for its Night Vision Generation I-III image intensifier tubes. That power supply was not much bigger than a nickel, but it had a tremendous amount of technology built into it to deliver the high voltage necessary to accelerate the light coming in. In order to emulate the low-light environment this little bitty thing operates in, we ended up building some pretty large PC boards with some unique circuitry. ITT's night vision system is currently the choice of the U.S. Army and the Marines in locations throughout the world. www.autotest.com