Where do we stand today in terms of market adoption of WBG, and especially GaN? 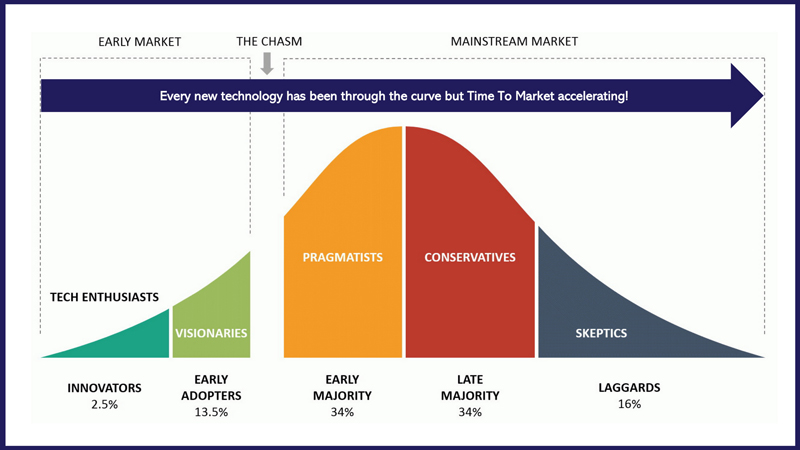 Figure 1: Experienced power designers have crossed that technological chasm many times, with the latest one being the migration from analog control to digital (Source: PRBX)

For a power designer, any new technology that makes it possible to improve performance whilst simultaneously making products smaller and more energy efficient is a very exciting concept. Over the last century the world of power electronics has witnessed many innovations, with the latest major one being the move from analog to digital control. However, we are now witnessing a huge, new technology step, the implementation of the Wide Band Gap (WBG) semiconductors. Gallium Nitride and Silicon Carbide have been used in radio power amplifiers and high voltage diodes for years, but now have become part of the power switching chain as transistors. At the same time, conventional MOSFET performance levels have improved, and both will coexist for a long period.

For all new technologies, time-to-market is inevitably a long process. Original research, patenting, technology introduction and market adoption could take over 10 years. We are all aware of the camel-back curve (Figure 1) and that the success of a new technology comes from the pragmatists and conservatives. Introduced in 2005, digital control in power supplies is still considered by some as a curiosity. In normal circumstances it would have been the same for the adoption of WBG, but ironically the  Covid pandemic may have contributed to the speed of adoption.

For many technology analysts, the cornerstone of WBG took place at the APEC 2018 when ‘challengers’ demonstrated the commercial potential of WBG technology. Among the leaders promoting GaN that year, Efficient Power Conversion’s (EPC) idea to implement GaN in LIDAR applications stood out, especially with that technology becoming preponderant in the new generation of motor vehicles. Navitas also gained attention and pushed GaN integration to a higher level by packaging drivers and switches on the same substrate.

The general enthusiasm for WBG was real and a decent proportion of companies had begun evaluating and prototyping the technology when the pandemic struck. In a matter of weeks, travel restrictions, curfews, work-at-home and other rules changed our way of working. When that happened, power electronics component manufacturers quickly adjusted to the situation, increasing resources for those not able to work in the office to allow them access to technical support and providing online content. In fact, some semiconductor manufacturers shipped 10 times more evaluation kits than usual, and the number of WBG new product announcements was impressive.

There’s no doubt that the pandemic created a lot of issues and drama, but it also created a unique opportunity for companies to give power designers time to learn about WBG and even to run online simulations, shortening prototyping time and adoption when back in the office.

It’s hard to put an exact figure on how much the conditions brought about by the pandemic have contributed to accelerating power designers’ understanding of WBG, but some estimate that within two years, power designers learned as much as they would in eight years under normal conditions! This situation is confirmed by the number of new products being launched.

When first presented, WBG power semiconductor utilization was limited by the number of drivers available, making it difficult for power designers to consider the technology. Also, new technologies are always questioned regarding reliability and sustainability. Market adoption depends on how simple it is for power designers used to conventional MOSFETs to use WBG, and semiconductor manufacturers’ speed in developing ‘ready-to-use’ solutions that include drivers, protection, monitoring and other functionality into a single chip. This not only simplifies implementation but also reduces the overall size of the power stage, and combined with higher switching frequencies make it possible to reduce the size of magnetics, thus increasing power density whilst reducing the overall volume and mass of the power supply.

This wish is becoming a reality, and one example of the benefit of using WBG GaN to achieve it, is a charger launched by OPPO that delivers 50W in a size equivalent to a cookie (82.2 x 39.0 x 10.5 mm) and only weighing 60g (Figure 2). This was made possible by combining the Navitas GaNFast power ICs with a planar-transformer, an optimized topology and a higher switching frequency. At the same time, Efficient Power Conversion released a GaN IC integrating everything to make it simple for power designers to implement into their new designs (Figure 3). Those two examples illustrate how WBG GaN manufacturers rapidly moved from ‘complex’ to ‘simple’. 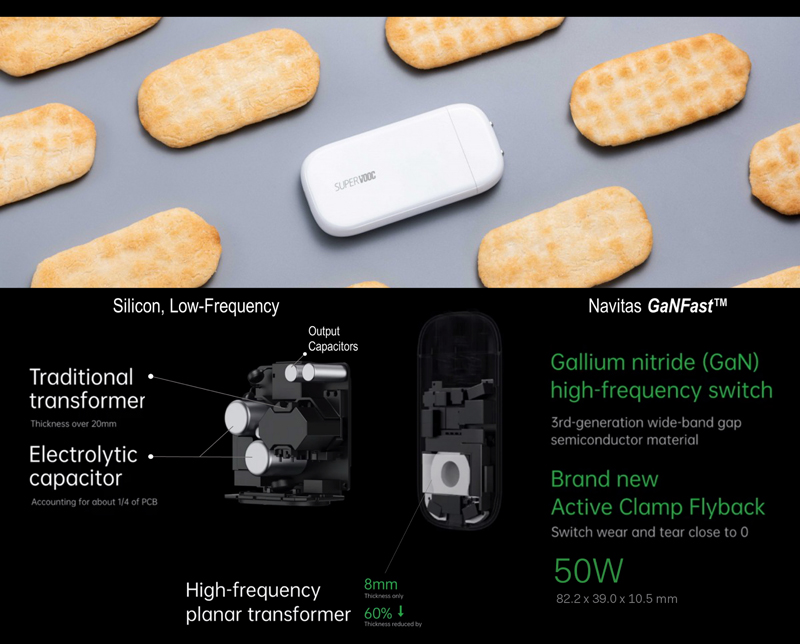 Switching faster at higher frequencies and achieving higher efficiency is what we are all aiming for, and of course not all power supplies will require megahertz switching, but the range of applications benefiting from WBG is significant. Whilst it is both obvious and beneficial to everyone that a USB charger or a PC’s external power supply is able to attain higher power levels in a smaller and lighter case, there are many more applications that will benefit from WBG technology. We are witnessing a new type of power architecture emerge in which short term energy storage will be integrated into the power-rack in applications such as datacenters and process control. 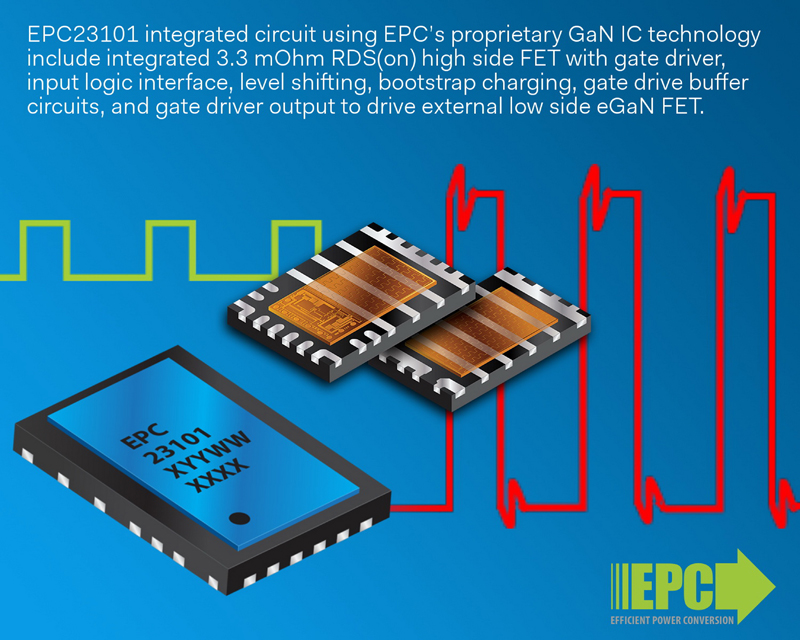 Considering that there is little or no possibility to add more racks into existing equipment, and that new equipment has to fit into ever smaller cabinets, power supply manufacturers have no other choice than to squeeze the size of the power supply to free up space for batteries or supercapacitors. The laws of physics are what they are, and the only solution to decrease the power supply’s physical size while maintaining the same output power is to increase the switching frequency. That’s easy to say and hard to achieve, and this is where the benefits of WBG become obvious.

By combining digital control, WBG and a higher switching frequency the front-end power supply can be shrunk enough to house the battery backup into the same volume. Power supplies and WBG semiconductor manufacturers have already shown case studies promoting the benefits of that combination, and there are already products on the market developed for such applications. The concept of decentralized energy storage in industrial applications is growing and there is no doubt that will contribute to the implementation of high switching topologies using WBG.

The need for power solutions able to deliver a stable voltage from a very unstable power source is an interesting area to explore. With the development of local data transmission, equipment manufacturers are looking to develop a front end power converter that can power a system from any DC source from 12VDC to over 200VDC, in the power range of 100W to 1KW. As those projects move forward, they are now considering reducing weight and size, adding complexity to an already complex project. 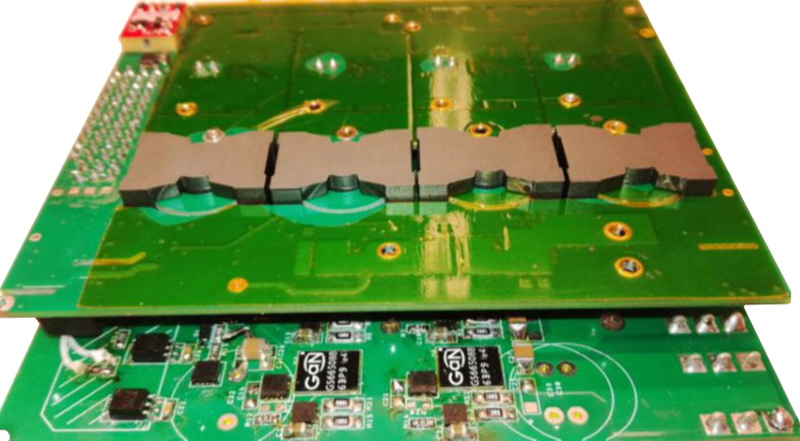 As a power designer, this is the type of project we love and the only way to meet such a requirement is to combine a set of technologies such as digital control, GaN, multicore transformers with advanced wiring and auto-tuned topologies (Figure 04). Such applications may be extreme, but they illustrate the possibilities when combining the latest technologies available to power designers.