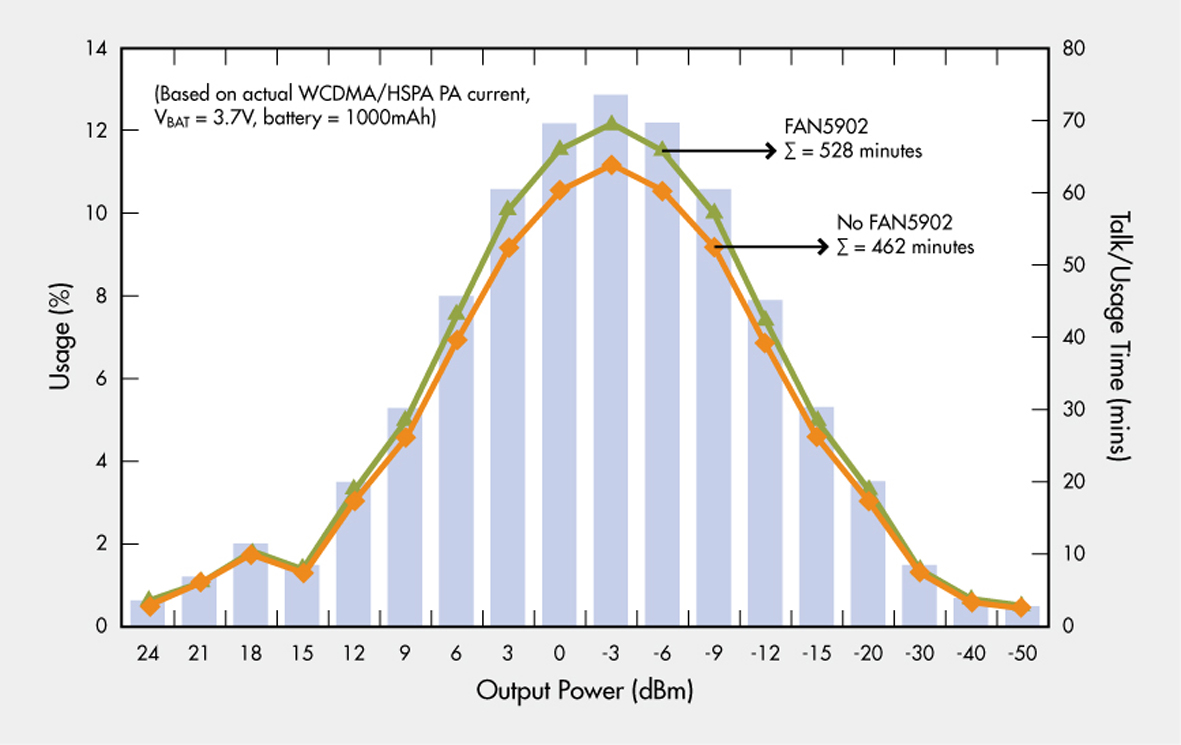 Figure 1: Talk time analysis of a 3G PA with and without FAN5902 under WCDMA signal modulation and 1000mAh Li-Ion battery. The power distribution function is DG09 and can be found in GSMA's white paper "Battery Life Measurement Technique, v4.7".

What is more annoying? Running out of battery or constantly needing to recharge it? With the proliferation of cellular mobile handsets, especially smartphones in the world today where people are connected 24 hours a day, 7 days a week, consumers can't seem to get enough of the voice calls, emails, text messages and surfing the web. All of this activity on our mobile handsets consumes battery life and with this constant use, phones can go to that dreaded one bar on the battery power indicator very quickly. What can be done to prolong the usage time for these handsets so that we can use the smartphone longer? And of course, using a bigger battery is not an option as users demand smaller, thinner and sleeker handsets. Design engineers are constantly looking for ways to improve power management performance and focus on three areas where these interventions will have the most impact. The three areas outside of the baseband processor and RF transceiver that consume the most power in a handset are the power amplifiers (PAs), the display and the applications/graphics processor. Why are these three areas the focus? Nowadays, people talk and surf the Internet all at the same time and when you do this the display is usually on as well, plus the PA needs to be on constantly to transmit voice calls and data to the base station and finally the applications processor is running so that you can bring up the website to watch a video or enable other applications. The PAs for 3G networks consume a lot of power especially when the reception is poor since it needs a higher output power to connect to the base station while maintaining linearity requirements to ensure 3G signal fidelity. A 3G PA will consume current based on the output power level and the higher it is, the more current will be drawn from the battery. Transmitting data requires higher output power and thus, consumes more current. There are two novel techniques used to reduce PA current consumption: DC-DC converters and envelope tracking. The use of DC-DC converters is increasingly being used in smartphones and it operates by stepping down the supply voltage for the 3G PA to a level where it will meet the required output power level but minimize the amount of current consumed. Implementing such a solution provides a two-fold benefit - longer talk/data usage time and lower heat dissipation. The FAN5902, an 800mA, 6MHz step-down DC-DC converter with a bypass mode, from Fairchild Semiconductor was designed specifically for 3G PAs to lower power consumption and extend the connection time performance. The FAN5902 works in conjunction with both the baseband processor and 3G PA to lower the current consumption. The baseband processor will set the output power level of the PA based on information it receives from the base station and then translates it to a supply voltage for the FAN5902 to output to the PA. By dynamically adjusting the PA's supply voltage and therefore the current, the FAN5902 can extend the talk and data usage times for mobile handsets by at least 15%. See Figure 1 which illustrates the performance under DG09 power distribution function between a standalone 3G PA and a 3G PA enabled by FAN5902. Table 1 summarizes the performance under various conditions.

In addition to extending talk times, a DC-DC converter-enabled solution also helps lower the heat dissipation so that handsets or USB dongles/data cards won't get as hot. Figure 2 shows the thermal profile of 3G PA with FAN5902 and the other without it.

The display is the second major consumer of power after the PA and since it is on whether you are looking up contact information, surfing the web, reading emails or watching mobile TV/YouTube® videos. The predominant display technology current is TFT LCD displays and it requires white LEDs to backlight it. Since the trend is for larger LCD displays, it means that more white LEDs are required to effectively backlight the display which, in turn, means more current is needed to power the LEDs as well as the display itself. In the high-end feature handsets and smartphones, dynamic backlight control (DBC) and auto luminous control (ALC) are used together to not only minimize current consumption but also enhance visual experience for the user. ALC requires the use of an ambient light sensor, which detects the amount of light in the environment and then sets the LED current based upon an algorithm programmed in the LED driver or applications processor. So depending upon the lighting conditions the LED current will be set low when it is dark or maximum LED current in direct sunlight. DBC is a technique that adjusts the LED current based upon the image/video content on the display such that a scene in a video with more dark content will have lower LED current vs. a brighter scene. The DBC programs the current based upon a pulse width modulation (PWM) signal from the graphics processor or LCD driver IC and is constantly changing with the video content that is being displayed. Figure 3a shows ALC and DBC in operation with a screen capture of software program used by Fairchild to show the ambient light level (left graph) and corresponding LED current. Though it cannot be illustrated properly the DBC is in action with the "blue bars" for external PWM and static PWM level will go up or down based on the image or video content. A photo of Fairchild's evaluation kit demonstrating ALC and DBC is shown in Figure 3b. 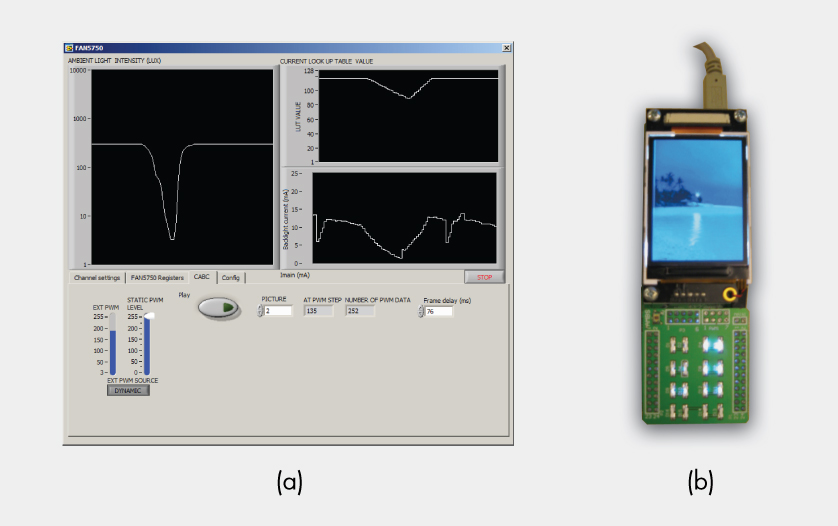 Fairchild's FAN5702, 180mA charge pump LED driver with I2C interface, can be configured to enable both ALC and DBC. The ambient light sensor is connected to the applications or baseband processor, which will take the input and determine the appropriate LED current level based on the algorithm for external lighting conditions. This data is then sent via the I2C interface to the FAN5702 and set the LED current. The PWM/EN pin of FAN5702 is programmed for PWM operation and it is, in turn, connected to the LCD driver IC, which will send the PWM signal to FAN5702 based upon the image/video content on the display. Figure 4 is a system block diagram of FAN5702 using both ALC and DBC. Adopting ALC and DBC for displays in mobile handsets will help realize up to 50% savings in power consumption.

The third area where there is significant power consumption is the applications or graphics processor; and if the display is on then this chipset will be running full tilt. However, this processor does not always run at full power all the time. To take advantage of instances when the chipset is running at lower power levels is to use a technique called dynamic voltage scaling (DVS). This is an ideal solution in mobile handsets and other portable electronics because the supply voltage can be scaled down to a lower core voltage and allows the chipset to operate at reduced clock frequency and this helps to achieve lower current consumption.

This is best illustrated by the following equation:

Where: The power (P) is proportional to the product of the clock frequency (f) and the square of the core voltage (V). Therefore, the faster the processor clock frequency the higher the power consumption. But when the core voltage is lowered, the power consumption can be decreased quadratically. An applications processor can be powered by FAN5365, a 6MHz, 800mA/1A step-down DC-DC converter with I2C interface, for optimum power conservation. The I2C interface is used to dynamically program the voltage between 0.75V to 1.975V in 12.5mV steps to meet the processing power requirements of the chipset. The FAN5365 would supply a core voltage of 1.2V to the applications processor for maximum processing power when watching a video on a website but once it is over it will drop down to 0.8V for lower level operation. There are a variety of ways to improve overall power management performance of mobile handsets and in particular smartphones with both simple and complex techniques. By implementing one or all three of these power management solutions for the PA, display and processor cores into mobile handsets, designers can provide significant power savings to prolong the operating time. All of this is done in mind to keep the user happy because all they care about is not having the handset lose battery power at a critical time and that they don't have to recharge this handset frequently. www.fairchildsemi.com