Digital advantages in an analog world

The smart grid begins at the point of load

Expectations for digital power have run high, especially when one considers the explosive growth created by digital logic in many other markets. However, overall, acceptance of the technology has arguably been firm rather than explosive, despite even the early digital power solutions being at least equal and typically offering better performance than highly developed analog converters.

Certainly, there is widespread availability today of tried-and-tested analog point-of-load (POL) DC/DC converters. However, in many respects and following many years of continual improvement, analog is fast reaching a development plateau in the DC/DC power sector. There is therefore a need for a fundamental reappraisal to deliver better conversion efficiency, power density and application flexibility. Increasingly, improved performance can be achieved in all these areas with digital power.

Energy consumption worldwide is reaching extremely high levels – and although Information and Communications Technology (ICT) markets represent only 2% of the total, they are making a growing contribution with an increasing number of data centers being set up and ever-higher traffic due to demanding media streams such as video applications. This requires telecom and datacom equipment manufacturers to innovate in new ways to manage energy: more data with less power is the challenge that power architects are now addressing and this will become even more strategically important when moving to 5G.

The advantages of digital power are many with conversion efficiency often at the top of the list. Digital converters offer the ability to quickly adapt in real time to changes in line and load conditions, due to network traffic demand to use one example. Today’s advanced mixed-signal silicon processes allow chip designers to integrate a digitally controlled core, which generates the PWM stream, alongside a supervisory measurement and control subsystem together with the industry-standard PMBus communications interface. By dynamically adapting its inner-loop’s responses to line-and-load conditions, the digital core flattens and extends the optimal operating efficiency area, and especially towards the light load levels increasingly demanded by today’s power-sensitive applications.

Another major advantage offered by the digital converter over its analog counterpart is the huge improvement in application flexibility, which is largely enabled by the onboard measurement and control subsystem. This subsystem allows power system architects to implement strategies ranging from acquiring key parametric data in real time to actively managing power demand. The PMBus interface hugely simplifies connectivity, yet any properly designed digital POL converter can also run in stand-alone mode delivering conversion-efficiency benefits in analog POL replacement applications.

A representative digital POL can also deliver power density improvements of approximately three times with no detriment to its electrical or thermal performance; and this excludes the additional footprint required for an external control system around a typical analog converter. Another advantage is in the increasing complexity of power distribution systems, where the flexibility of digital power can help with the number of different voltage rails required for microprocessors, ASICs, FPGAs and other digital logic.

Importantly, the latest digital POL converters also offer features highly requested by users, such as the ability to operate autonomously in parallel current-sharing mode with no external OR-ing components, while dynamically managing phase-spreading duties between varying numbers of parallel-connected converters. This makes it possible to disable POL converters during light-load conditions to save static conversion energy and then put them back into the circuit with increased current demand. Other applications that are now straightforward to implement include fault-spreading and redundancy schemes.

Implementing a current-sharing scheme requires accurately balancing the power delivery between paralleled converters. In a conventional topology, external droop resistance forces each converter to deliver approximately equal amounts of current, and reverse-blocking diodes prevent any converter from sinking current. The implementation that Ericsson adopted for its BMR462/463/464 family for example dispenses with these external components by using a dedicated converter-to-converter bus to exchange real-time data between appropriately configured devices (see Figure 1). 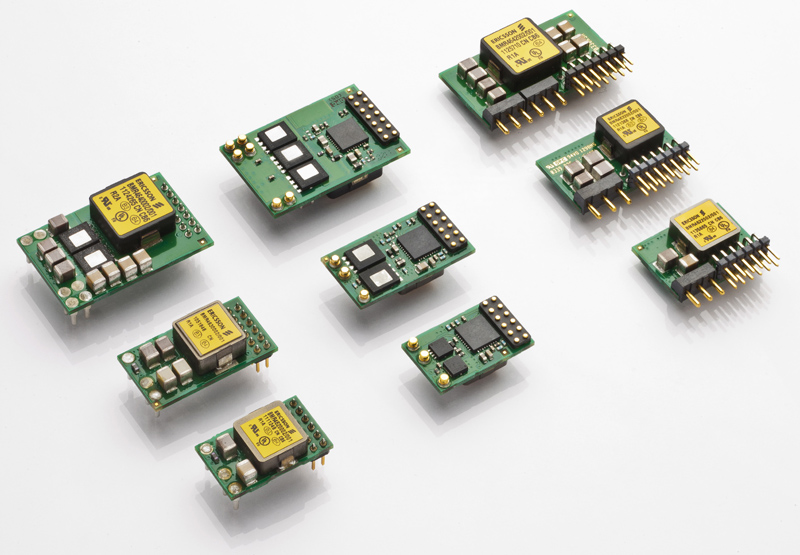 In this scheme, a form of digitally controlled artificial droop resistance enables each device to accurately assess its inductor current. One device acts as a master that broadcasts its inductor current via the single-wire group communications bus to as many as seven slave devices that then adjust their output voltages to balance their power delivery to within a few percent. The process runs continuously until a phase is dropped or a fault occurs, when suitably configured devices automatically recover the situation. Because each converter withstands external bias voltages, it is possible to connect up to eight converters in parallel using no external components and to configure them to manage their behavior to suit various applications.

The additional connectivity delivered by digital converters does require extra connections however, beyond the typical set of power I/O, voltage trim, remote sense and on/off pins possessed by analog POL converters. In theory, the minimum number of additional pins is the four lines demanded by the PMBus, but a practical design also includes a PMBus addressing arrangement together with any dedicated functions offered by a typical digital converter.

The connections that appear on a representative family of first-generation digital POLs comprise 10 pins on a 2mm dual-row communications header that includes the legacy analog functions alongside the PMBus lines (six with addressing support) and a clock synchronization input. A second-generation digital POL converter family requires 12-14 pins to support autonomous current sharing and a voltage-tracking feature to greatly simplify complex sequencing applications. Importantly, a single footprint can accommodate all of the members of a digital POL family, which makes it easy to substitute higher-current devices when upgrading a system, and with no changes to the board layout (see Figure 2). 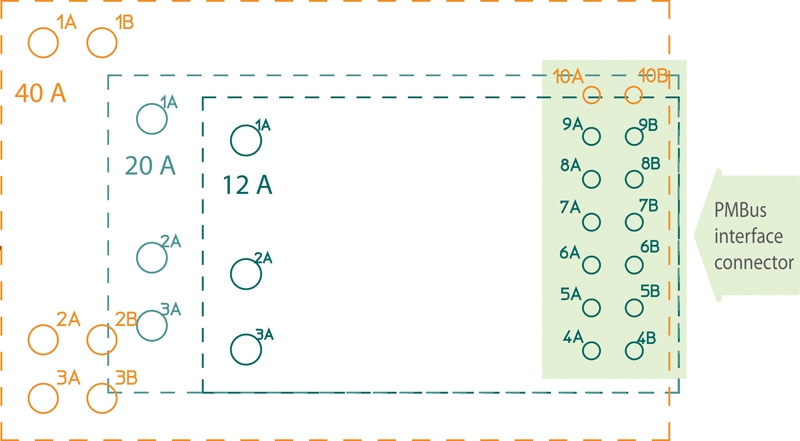 As well as the ability to precisely tune a digital POL converter within an environment to optimize efficiency, a further aspect of application flexibility is the programmability of the device. A digital POL device can be programmed by its maker or at any later time to set parameters such as output voltage, turn-on/off delay times and slew rates, and warning and fault thresholds. In many instances, a single device can replace multiple similar variants, thereby easing inventory holdings.

In addition, the PMBus-based features offered in digital POL converters provide ongoing cost-of-ownership benefits in terms of energy-usage reductions and system reliability improvements due to the potential for active energy-management and predictive-maintenance schemes. These schemes are now simple to implement in hardware terms, while standard PMBus commands can ease the software development burden, thereby minimizing development costs in many sophisticated applications.

Reductions in component count and power dissipation also help to improve reliability of the digital converter, where a mean-time-before-failure (MTBF) of 20 million hours is now typical. In addition, the potential for inventory reduction due to the digital converter’s programmability simplifies logistics management, also dispensing with the need for complex external power-sequencing hardware to support multi-rail devices such as FPGAs and many microcontrollers.

Power system designers that are new to digital power converters can take advantage of development environments together with the application support that enables them to explore and implement sophisticated power management schemes with unprecedented ease. For example, Ericsson’s 3E evaluation kit includes a USB-to-PMBus adapter and a software environment that suits prototyping through to generating production-ready device set-up files.

Overall, the energy optimization capabilities, programmability and flexibility offered by the latest digital POLs can significantly sway the economic balance in their favor and truly challenge analog converters.