In the US alone, it has been estimated that there are over 150 million installed residential dimmers designed for incandescent or halogen bulbs that operate directly from the mains voltage. LED bulbs ideally should be able to drop into those existing sockets and provide a smooth, flicker and shimmer-free lighting experience without being cost-prohibitive. The solid-state lighting industry continues to struggle today to effectively adapt LED technology to the installed dimmer base. The luminaires need to work with phase-cut dimmers, whether TRIAC (triode-alternating-current) or digital and keep the dimmer functioning properly while providing a natural dimming experience.

TRIAC dimmers require a minimum holding current to operate properly and this holding current varies significantly for different models. To ensure broad TRIAC dimmer compatibility, LED bulbs need to draw a much larger minimum current than is necessary for the operation of the driver itself.

Most existing SSL LED drivers draw a high holding current via an active or passive bleeder circuit, compounding thermal issues by reducing efficiency and creating excessive heat. Excessive heat may require bulbs to be potted. Plus, whether active or passive, bleeder circuits require extra components, adding cost and complexity to the LED bulb. An ideal solution would incorporate the ability to work with virtually any dimmer without adding external components, thereby reducing system cost and complexity while improving bulb performance and operating lifetime.

Consumers expect LED replacement bulbs to be compatible with their existing, installed dimmers. So new SSL lights intended to directly drop into these sockets need to be backward compatible with a wide range of dimmers and they need to provide exceptional dimming performance.  Existing TRIAC and digital dimmers have only one thing in common – none of them have similar characteristics. This makes the job of the LED driver very difficult.  Not only does it have to interface seamlessly with the existing dimmer infrastructure, but it needs to do so efficiently and provide a long bulb lifetime (25,000 hours minimum).  This is not an easy task.

As mentioned earlier, TRIAC devices require a minimum current to keep them active.  This “holding” current varies widely from manufacturer to manufacturer.  Figure 1 shows a sample of holding current ranges from five different TRIACs. The spikes of current shown represent the minimum current that the LED driver would need to draw from the TRIAC to ensure that all five of those TRIACs would work with the designed LED luminaire. Incandescent bulbs work fine with TRIACs because they are purely resistive and draw significant amounts of current, more than enough to operate with any TRIAC on the market.

The minimum currents cannot always be met at low phase angles because the current draw is simply too low, causing TRIAC misfiring, visual flicker or even drop-out, where the light output stops sharply when trying to dim to low light levels. Existing LED driver technology offers a couple of different solutions to this issue. One is to use a passive bleeder resistor on the input that draws continuous current from the TRIAC output (see Figure 2), ensuring that the TRIAC always has enough current to operate properly. This loading causes a big hit to the efficiency of the LED bulb, but more importantly, generates significant heat. LED bulbs need to minimize heat, an aspect of LED bulb design that is critical to bulb longevity. 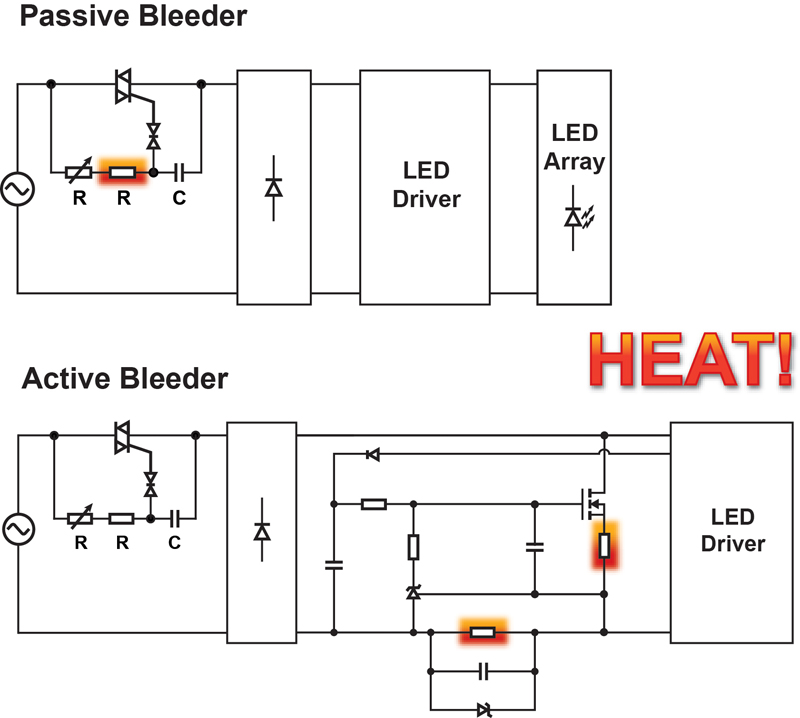 LEDs can operate for 25,000-50,000 hours at high temperatures with no issues, the rest of the components in the circuit are a completely different issue.  The bulk electrolytic capacitance, for example, has a significantly lower operating lifetime when subjected to very high temperatures.  For every 10°C rise in operating temperature, the lifetime of an electrolytic capacitor reduces by 50%. Even a small amount of extra power dissipation in the LED bulb can reduce the operating life of an LED luminaire because of the external component sensitivity to temperature.

Instead of simply burning the current needed to keep the TRIAC operating properly, the ideal solution to the problem is to use that current somewhere else in the circuit, effectively recirculating the bleeder current. This is not easy to implement in the analog domain, but digital control technology permits complex dynamic control schemes to more intelligently use the energy required to keep legacy dimmers operating correctly. Figure 3 shows a representative application circuit for a non-isolated LED driver circuit using a device like the iW3688 from Dialog Semiconductor. This device exemplifies how a digital core can enable a low-cost solution with broad sweeping dimmer compatibility. 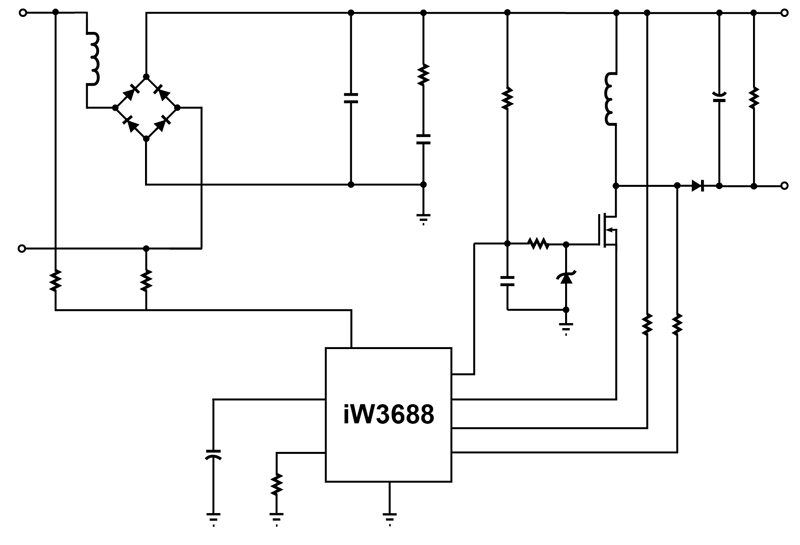 The core technology of the iW3688 uniquely executes multiple functions using only one external FET. It uses the same switch to keep the TRIAC dimmer circuits working properly and to provide power for the control circuit itself, eliminating the need for a secondary winding on the main magnetic core. Removing the need for an auxiliary winding to power the controller itself gives designers the option to use low-cost, off-the-shelf inductors for non-isolated applications, as well as standard flyback transformers when the application requires isolation.

Instead of simply burning extra current to keep the input TRIAC working properly, the iW3688 achieves dynamic management of the input currents so that any additional current needed to keep the TRIAC happy that is not already being drawn by the main power conversion stage, is used internally instead of purely dissipated in the form of heat. The digital technology at the core of all of this allows for monitoring of all the key voltages and currents and permits the controller to dynamically modulate the main power FET to accomplish all of these different tasks.

This architecture significantly reduces the external component count by removing passive or active external bleeder circuits and auxiliary windings from the magnetics, saves energy, and most importantly, reduces heat generation, eliminating the need for costly potting which drives up cost in LED luminaires.

With each new generation of digital power management technology, capabilities expand and the designer gains degrees of freedom not previous available in the analog-only world. Solid-state lighting benefits greatly from digital technology by enabling low-cost luminaires that drop directly into existing dimmer-enabled homes, providing a natural, full-range dimming experience to the consumer.