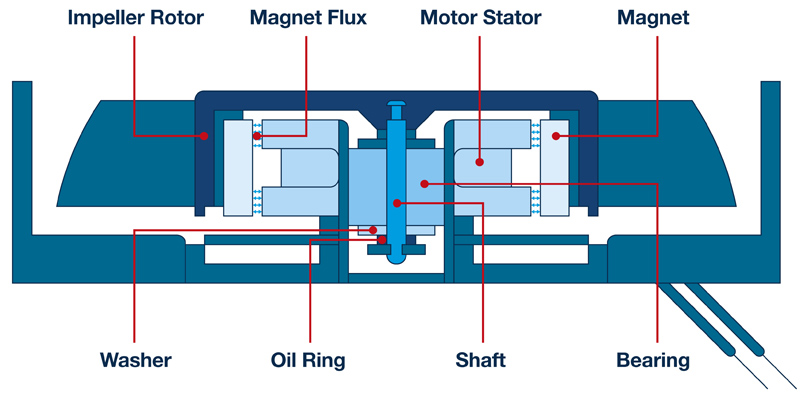 All electronic systems produce heat to a greater or lesser extent. Thermal management is an essential task for all designers and, in many cases, they opt to use a fan to maintain a stream of cooling air over the hottest components. By doing so, reliability is increased for the components and the system. Maintaining temperatures within certain limits is also a requirement for some safety approvals.

Over time, many alternates to fans have been considered and tried, yet in terms of efficiency and cost, the fan is yet to be displaced. A fan is simply an electric motor that has a set of blades attached to move the air as efficiently and effectively as possible. Fans can rotate thousands of times per minute and operate for years, leading to millions of rotations per day. The bearing that is used to mount the blades to the motor is essential for reliability, and the quality of the bearing defines the quality of the fan.

Multiple types of bearings are available, although the most commonly used are the sleeve and ball types. Each has relative advantages and disadvantages that are explored in this article.

Sleeve bearings are very popular and are widely used as they are simple in design, rugged and low cost. With a simple design, failures within their expected lifetime are relatively rare, and the rugged design enables them to be used successfully in challenging environments. Fans are often an issue for applications in close proximity to people, such as in offices, hospitals or the home, due to the noise they produce. However, sleeve bearings are relatively low noise compared to other types, making them well suited for these environments.

In a typical sleeve-bearing design, the central shaft of the fan is enclosed in a metal sleeve that contains oil or another lubricant to minimize wear and promote easy rotation. Not only does the sleeve protect the shaft, it also ensures positional integrity, maintaining the all-important gap between the rotor and stator.

Setting the gap between the shaft and the sleeve is a classic engineering compromise. If the space is too small then friction will increase, drawing more power than necessary and impacting overall system efficiency. If the gap is larger than necessary, then the rotor (and the fan blades) will wobble.

As the rotor relies on the sleeve to hold it in place, eventually the bore of the bearing will be eroded due to the billions of rotations of the fan during its lifetime. This is exacerbated if the rotation direction is always the same (as it must be with most fans). Eventually the cylindrical hole will become oval in shape, reducing the lifetime of the fan and increasing operating noise levels.

Moving or re-orienting the fan will cause wear to occur in multiple places. This leads to uneven bearing wear that also causes the fan blades to wobble and noise levels to increase, often to an unacceptable level.

Sleeve bearings are self-lubricating, but this requires oil rings and Mylar washers (as shown in Figure 1) to retain the lubricant. However, adding these components increases friction and prevents the gases that build up during operation from venting. These trapped gases will form nitride particles that cause further friction and can lead to premature failure.

Sleeve-bearing-based fans are used extensively, especially in static equipment that operates at normal ambient temperatures. They are particularly popular in computer and office equipment as well as industrial cabinets and HVAC equipment.

Ball-bearing fans are a popular alternate to sleeve-bearing designs offering benefits in certain circumstances and the ability to operate at elevated temperatures. When using ball-bearing fans, orientation is not a concern, and general wear and tear during their operational life is significantly less than with sleeve designs.

However, they are significantly less rugged as well as being more complex and more expensive. They are also more susceptible to impact and are generally noisier, which can limit their use in equipment intended for offices or homes.

As the name suggests, ball-bearing fans use a number of balls held in a cage around the shaft, which largely eliminates the problems of wear (and associated wobbling) seen with sleeve designs. It is quite common for fans to have a pair of bearings that are separated and held in place by a spring.

When compared to sleeve designs, ball-bearing fans experience less friction. The addition of springs around the shaft enables wear-free operation at any angle of orientation, allowing for greater flexibility in deployment as well as enhanced reliability.

In general, ball-bearing fans are used where performance is the primary criterion and operating noise is less of a consideration. This includes datacenters and some other computer-related applications as well as home-based applications such as hairdryers, fixed fans and vacuum cleaners. In industry, ball-bearing fans are used in industrial dryers as well as general-purpose cooling for electronic and electrical systems.

An alternate to sleeve and ball bearings

While ball- and sleeve-bearing designs remain very popular, a third option known as the omniCOOL system uses a fully magnetic structure combined with an enhanced sleeve bearing to overcome the deficiencies of the two classic approaches. Using the magnetic-based structure, the rotor is able to mimic a spinning top – a rotational device that can operate at any angle without toppling. The magnetic flux is set at the front of the rotor and follows a path parallel to the motor shaft, thereby ensuring uniform magnetic attraction whatever the angle of the rotor.

The shaft is located by a supporting cap on one end at the front of the bearing, defining a point around which rotation takes place. This removes the weight of the rotor and fan blades from the shaft and bearing sleeve, so that the fan can be used at any angle. The magnetic flux then pulls the shaft down, which reduces any tilt or wobble that may be present, as well as reducing friction.

The magnetic technology from CUI Devices’ omniCOOL system can be used in conjunction with conventional sleeve- and ball-bearing fans. While this goes some way to addressing the issues present in these technologies, a more advanced bearing design is necessary to eliminate them completely. The bearing design in the omniCOOL system has additional hardening at all of the key contact points. This allows it to operate in the elevated temperatures often experienced by a fan, up to 90°C.

As the contact surfaces are reduced and friction is therefore lessened, omniCOOL fans do not require as much lubrication as conventional designs. As a result, the oil rings and Mylar washers can be omitted from the design, delivering multiple benefits including greater simplicity, easier assembly, less friction, lower audible noise, no wear due to gases being trapped and, ultimately, greater reliability.

CUI Devices’ omniCOOL system addresses the issues found in most conventional sleeve- and ball-bearing fans, delivering a fan that can operate in any orientation while remaining quiet and low cost. omniCOOL technology can replace either of the conventional technologies and bring enhanced performance, flexibility and reliability. 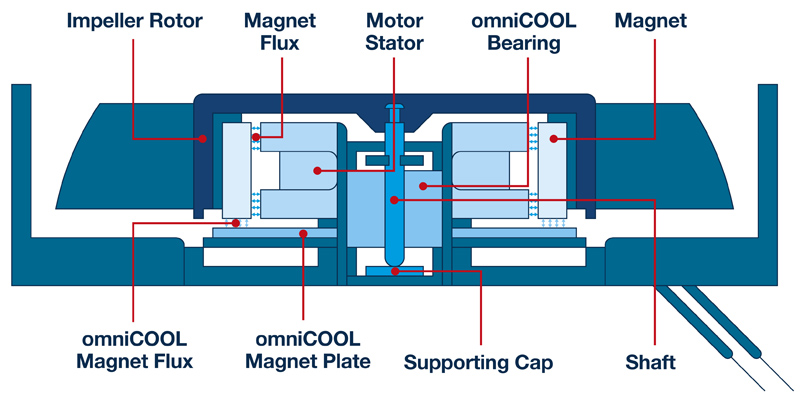